Is relativity of simultaneity being violated in accelerated frames?

Consider relativity of simultaneity in SR, where 2 observers S and S' are inertial. With the Lorentz transformation $$t=\gamma(t'-vx'/c^2)$$ we can see that the relativity of simultaneity comes from $vx'/c^2$ where $x'$ indicates position of event say A in S' frame. It's simple to deduce this fact, because if we drop this term, and suppose that two events are simultaneous in one frame, one can see they will be simultaneous in all frames. Let's say there are two events in spacetime such that $t'_A=t'_B$ while $x'_A\neq x'_B$. By using the equation above and dropping $vx'/c^2$, $$t_a=\gamma(t'_a)~~\mbox{and}~~t_b=\gamma(t'_b)~~\mbox{so}~~ t_a=t_b.$$ Now let's consider a special case of acceleration where observer S' moves with constant proper acceleration $g$ and observer S is inertial. This is the so called hyperbolic motion, and we have this transformation for time:

$$t=\frac{c}{g}\sinh(gt'/c)$$ As you can see, $t$ does not depend on position of events, so relativity of simultaneity can not be understood from this formula. Which is a bit off considering S' is in motion relative to S.

I think this problem comes from my misunderestanding, and this transformation does not apply for all events, rather it's merely for the events in S' origin (i.e $x'=0$) probably. However Don Koks in his book Explorations in mathematical physics the concepts behind an elegant language compares relativity of simultaneity of events for accelerated frame, where he uses the same transformation.

Also I appreciate if someone shows me a way to compare simultaneity of events for accelerated frames with an example.

So in short, what's the physical meaning of this transformation? Why is it not position dependent (from physical point of view)? Does it indicate some kind of absolute frame?

The question being asked here is, therefore, really the question:

2. what is a good way to understand the constantly accelerating reference frame (in flat spacetime)

The constantly accelerating frame in flat spacetime, also called Rindler frame, is a very good platform for learning various lessons in both special and general relativity. One could write whole books about it; Wikipedia provides a useful introduction. The basic idea is to chart a large region of flat spacetime using two different coordinate systems: either ordinary Minkowski coordinates $T,X,Y,Z$, or Rindler coordinates $t,x,y,z$, related to the former by $$ T = x \sinh(\alpha t),\quad X=x\cosh(\alpha t),\quad Y=y,\quad Z=z $$ where we have set $c=1$. In terms of the quantities quoted in the question, we have $\alpha = g$ and the unprimed coordinates in the question are equal to the $T,X,Y,Z$ coordinates adopted here. 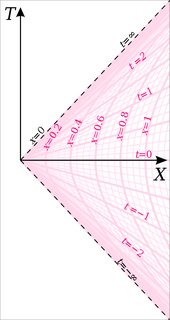 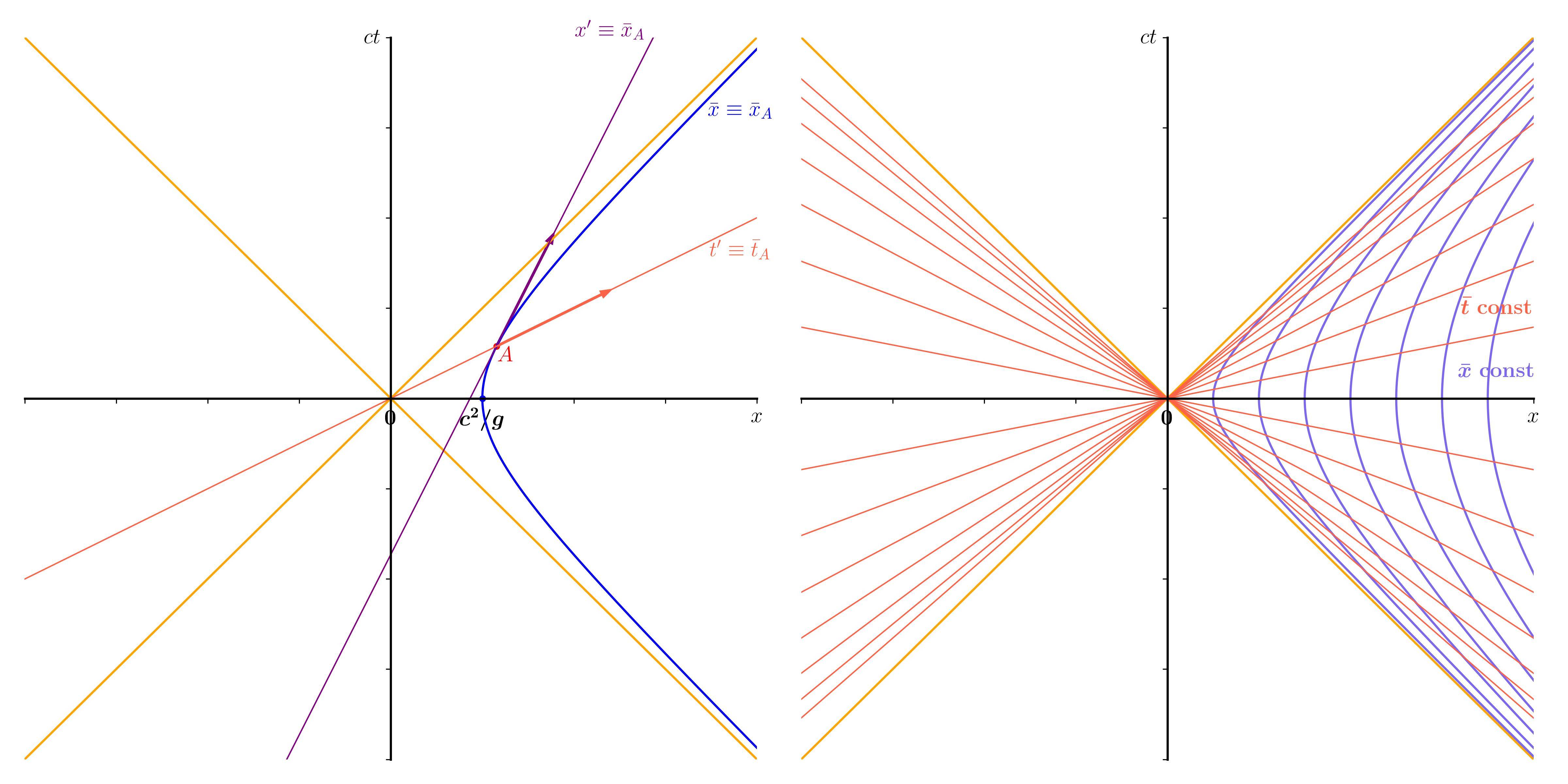 We can use a similar procedure for arbitrary $\bar{t}$: at any moment, we can let the $\bar{x}$-coordinate coincide with the $x'$ coordinate of a momentarily comoving inertial frame (i.e. an inertial frame moving with the same velocity as the traveler at time $\bar{t}$).

Not the answer you're looking for? Browse other questions tagged special-relativity acceleration relativity or ask your own question.

3
Is it possible to use two different metrics for one observer in distinct times (related to twin paradox)
3
Time dilation calculation in the relativistic rocket
3
Four-velocity of an accelerating particle
2
Does an observer inside of an accelerated frame experience tidal force?