I’ve seen answers which cite newton’s third law as the cause for buoyant force, but wouldn’t this mean the moment an object of any weight is placed on a fluid, the fluid would immediately exert an equal and opposing force to the object’s weight? This would result in a 0 net force on any object and thus nothing should accelerate down. Everything should float.

Furthermore, if an object was already submerged in fluid and pressure= density x g x depth, then the buoyant force a fluid exerts depends entirely on the objects surface area and depth, not its density. The force upwards is the same for heavier or lighter objects , and thus I have no idea why newton’s Third law is ever cited. Additionally, it does not matter which face of a cube you talk about,the force on the cube’s side is described by Force=density X g X depth X area (I think) and since weight only acts towards the earth, Newton’s third law cannot be cited for the forces on the cube’s sides. (I think)

I thought that all fluid forces stemmed from random particle movement. Any clarification is greatly appreciated

I thought that all fluid forces stemmed from random particle movement.

Let me try to explain how buoyant force emerges.

There are tho key players here, gravitational force and pressure exerted by the liquid. A liquid under the effect of gravity has a pressure gradient along the vertical.

Assume that a cubic object of of length $L$ is fully in the liquid. 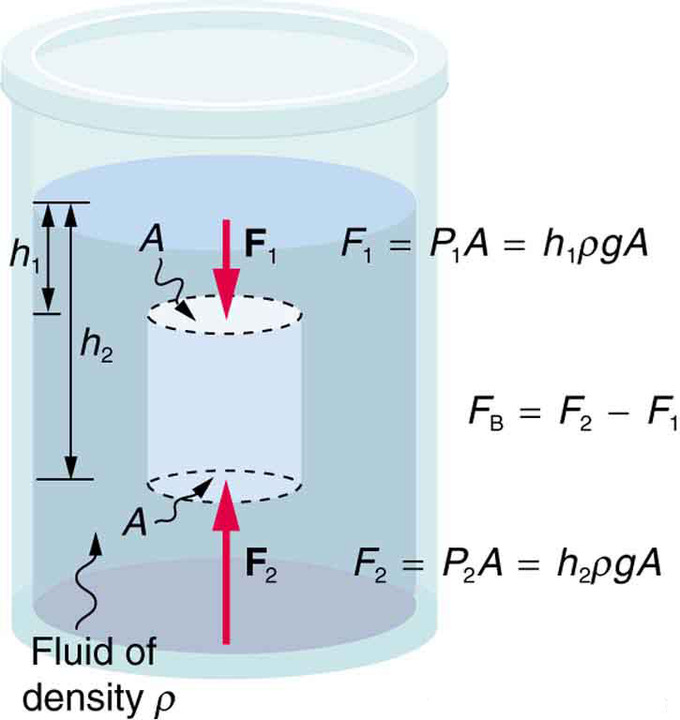 What is then the condition for equilibrium. There is a pressure acting on the upper surface of this object downwards with corresponding force equal to

$$\rho gdA$$ There is pressure acting on the bottom surface upwards. Which is $$\rho g(d+l)A$$ There is the weight of the object acting downwards. Which is $$m_og$$ The sideways pressure on the object cancels out. So the net force in the vertical direction is \begin{eqnarray} \rho g(d+L)A - \rho gdA - m_og\\ \rho g(d+L)A - \rho gdA -m_og\\ \rho gLA-m_og \end{eqnarray} This is the net unbalanced force. The first term is the force exerted by the liquid on the object. This is indeed equal to the weight of the liquid displaced $\rho gV_o$.

If the object is partially immersed in the liquid then the derivation is similar and gets a similar result.

Let $h$ be the depth to which the object is immersed. Then force due to the pressure exerted upward by the liquid is

The depth at which this happens is

$$h = \frac{m_og}{\rho gA} $$ remember that the maximum value $h$ can take is $L$ in which case the object is fully submerged. You can recast this in terms of the density of the object $\rho_o$

Following Archimedes' principle, when a body is submerged in a fluid it displaces an amount of water equivalent to the submerged volume.

What does this mean for buoyancy? Imagine the following situations: 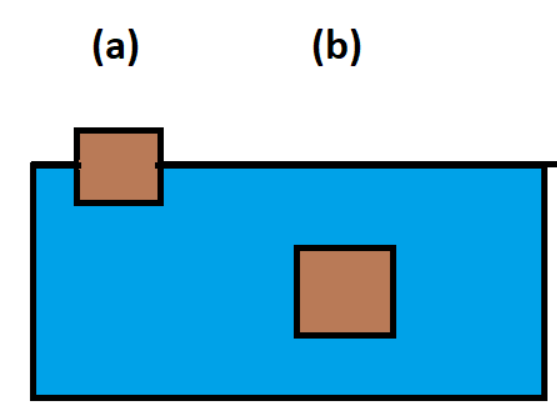 Our object is being pulled downwards by the force due to gravity, given by $$F_g=mg$$ However, as it displaces water, water "pushes back" due to Newton's law. Why do things accelerate then, if there is an equal and opposite force in play? Here is where Archimedes' principle comes in.

Assuming two objects of the same volume, a more dense object will experience a greater force due to gravity, and will thus require a greater reaction force in order to be neutralized. In the first instant that the body is in contact with the water, it will begin to sink, as the $F_g$ is greater than the reaction force by the water. However, as it sinks more and more, there is a larger Volume of water displaced by it, and the reaction force increases. Once enough volume has been displaced, the reaction force will equal $F_g$ and the object will stay in equilibrium. This could happen when the object has not sunk entirely, like in situation (a), or when it has sunk entirely, like in situation (b). It is also possible that the object is too heavy, and it cannot displace enough water due to its relatively small volume, and thus it sinks to the bottom.

This is how ships float! Ships are incredibly heavy, but they are designed to displace large enough amounts of water that balance out exactly the ships weight, and thus it can stay in equilibrium, afloat.

Concluding, there is only 0 acceleration on the object if it is in equilibrium, which happens if the $F_g$ is equal to the force exerted by the water. In fact, you can calculate exactly how much an object will sink:

Analyzing this, we can see that an object can be at equilibrium, as in (a) if it less dense than water. Thus, the volume displaced will be less than the volume of the object. If the densities are equal, then it can stay in equilibrium as in situation (b). If it is more dense, then it cannot displace enough water and it will sink.

I hope this answers your question

Fluids are deformable,dynamic and constant volume systems. The position of the fluid atoms/moleucles wrt each other keeps changing in time. Yet their is a constant(in time) average finite separation between them(the 'mean free path' length) at a given temperature $T$.

When an object is placed on the surface of a fluid, the fluid doesn't start exerting a normal force on the object. This is because unlike in a solid, where the inter-molecular forces have gridlocked the constituents into a rigid structure and therefore end up resisting the deformation the mass is trying to produce(thus generating the normal force), in a fluid the atoms/molecules yield. This is why any mass with weight can't stay at the surface of a classical fluid.

As the mass is acted upon by the gravitational field, it sinks into the fluid. As it sinks, it is trying to displace the fluid from the volume its sinking into.
Why does it displace? Because the fluid atoms/molecules can't penetrate the mass and seep into its interstitial space.
As the fluid has a finite volume(imagine a half filled bucket of water), the displaced fluid is displaced in such a manner that its potential energy in the field increases (imagine raised water level). Why is the fluid displaced in only such a manner? Because the fluid is incompressible.

Anyways, since the fluid's energy has been raised in an external conservative field, the fluid must have been acted upon by a force. Where did this force come from? Was it being exerted by the object? Yes,but not directly. Because the atoms/molecules were being displaced into positions that were higher in the field, work had to be done to raise them. Consider the atoms/molecules in direct contact with the fluid. The sinking object hitting the fluid molecules is responsible for "moving them out of its way". What about other atoms/molecules?(imagine water near the bucket wall). These are pushed up by the "I am not going to compress" nature of the fluid(the inter-molecular forces).

Since the object was exerting a force on the fluid, the fluid tries to resist this by exerting an opposite force on the mass. This is where Newton's third law is needed if at all. Why does it do so? Because the fluid is being transferred to a state of higher energy. From this state, gravitation is trying to pull it down to a state of lower energy.

What about the fact that all this is happening at some atom-to-atom or molecule-to-molecule level? How does this translate to the macroscopic buoyant force the object experiences? Theoretically, since force is a vector quantity, and superposition applies, the net force is simply the sum of all such forces. A center of mass $M=\rho_{M}V_{M}$ sinks by $h$ in a constant(assumed) gravitational field $g$ while a center of mass $M_{fluid}=\rho_{fluid} V_{displaced}=\rho_{fluid} V_{M}$ gains that potential energy.
Qualitatively, the buoyant force is simply the weight of the raised fluid mass trying to "lower" itself by pushing the mass back "up".
The weight $F$ of the displaced mass is
$$F=\rho_{fluid}V_{M}g=\frac{\rho_{fluid}}{\rho_{M}}Mg$$

Note that the force($=-\nabla V$) is determined only by the rise in potential energy of the fluid. For incompressible fluids and mass, this depends only on their densities and not on the surface area or shape of the mass or the depth of submergence in the fluid.

Why doesn't a mass($\rho_{M}<\rho_{fluid)}$ keep sinking? Because the mass of the excess(compared to equilibrium) raised fluid pushes it back "up".
Why does it keep($\rho_{M}>\rho_{fluid}$) sinking? Because the object is now fully submerged - there is no more fluid to raise. Yet the weight of the "raised" fluid isn't enough to keep the object afloat. So it experiences the good old gravitational acceleration, albeit reduced by buoyancy.

Let me first tell you one thing,Buoyancy is a force exerted on the body just because the fluid does not allow itself to deform because of the body weight. Now let me give an example,if i have a body having density less than the density of fluid,the body floats.This is because the weight of the body is not greater than the weight of water of the same value as of the body. So the water does not allow itself to deform. Hope this helps you.

Not the answer you're looking for? Browse other questions tagged pressure free-body-diagram density fluid-statics buoyancy or ask your own question.

0
Confusion about the buoyant force applied by fluids
1
Would a buoyant force still act if the object is placed at the bottom the fluid(without any gap for the fluid to enter)?

17
Why do we need to apply more force to push a submerged object deeper?
0
Why isn't the apparent weight of a body in a fluid equal to the buoyant force? Why does buoyancy reduce it instead?
0
Confusion regarding Archimedes principle
1
Buoyancy question
1
A basic question of positive buoyancy,
2
Why is pressure on object in fluid dependent on height of water column above it whereas the *force* on object is not?
0
Question About Buoyant Force and Weight of an Object
0
What affects Buoyant force?