Could anyone explain me in simple words what is being said in topic "4-2 Gravitational potential energy" from "The Feynman Lectures on Physics, Volume I" (great book and author btw)...

i don't understand after it starts talking about perpetual motion and lifting and lowering of weights.please explain in simple words. so i got confused at this point-

umm like how exactly weight lifting machine lift one weight by lowering another.and what does that line mean that no perpetual motion at all is a general statement of the law of conservation of energy.im also confused by the last four lines and the whole topic that follows...can't seem to visualize what is being said...so if anyone can say the whole thing in this topic in simpler words or help me visualize it would be of great help.

im also a bit more confused by the next para-

A very simple weight-lifting machine is shown in Fig. 4-1. This machine lifts weights three units “strong.” We place three units on one balance pan, and one unit on the other. However, in order to get it actually to work, we must lift a little weight off the left pan. On the other hand, we could lift a one-unit weight by lowering the three-unit weight, if we cheat a little by lifting a little weight off the other pan. Of course, we realize that with any actual lifting machine, we must add a little extra to get it to run. This we disregard, temporarily. Ideal machines, although they do not exist, do not require anything extra. A machine that we actually use can be, in a sense, almost reversible: that is, if it will lift the weight of three by lowering a weight of one, then it will also lift nearly the weight of one the same amount by lowering the weight of three.

why would you need to lift a little weight off the left pan?wouldn't the machine lift the right side(with one unit) up as soon as you placed 3 units on the left side?also what does the last four lines here mean again?how will you lift a weight of 3 by lowering a weight of one?how can one weight on one side make 3 weights on the other side go up?

It has been known for over two centuries that perpetual motion machines which create energy from nothing and disregard losses due to friction etc are crank theories that can never be realised in practice. For one thing, they violate the 1st Law of Thermodynamics (energy can neither be created nor destroyed). On the other hand, ideas for harvesting energy from phenomena powered by the sun or the moon may seem like perpetual motion but are not in the truest sense of the words.

An example of a weight lifting machine which lifts one weight by lowering another is a canal lock, which lifts a heavily laden barge by lowering a large mass of water into the lower chamber and floating the barge up to the next level. Some more modern and more ingenious ways of achieving the same thing by lowering a mass of water have been devised. These work according to the principles stated by Feynman, and as he says, don't amount to perpetual motion, though the source of the power, a falling weight, is infinitely renewed by the rainwater which fills the canal.

First you must be certain to understand what a "weight lifting machine" is. It is a kind of perpetual motion machine that runs on the argument that as it spins, the gravitational potential energy of the weights that are being pulled down are going to be exactly equal to the energy required to pull the weights on the other side up. Thus, it could theoretically move for ever. I have added a picture that I took from Stanford University's webpage. 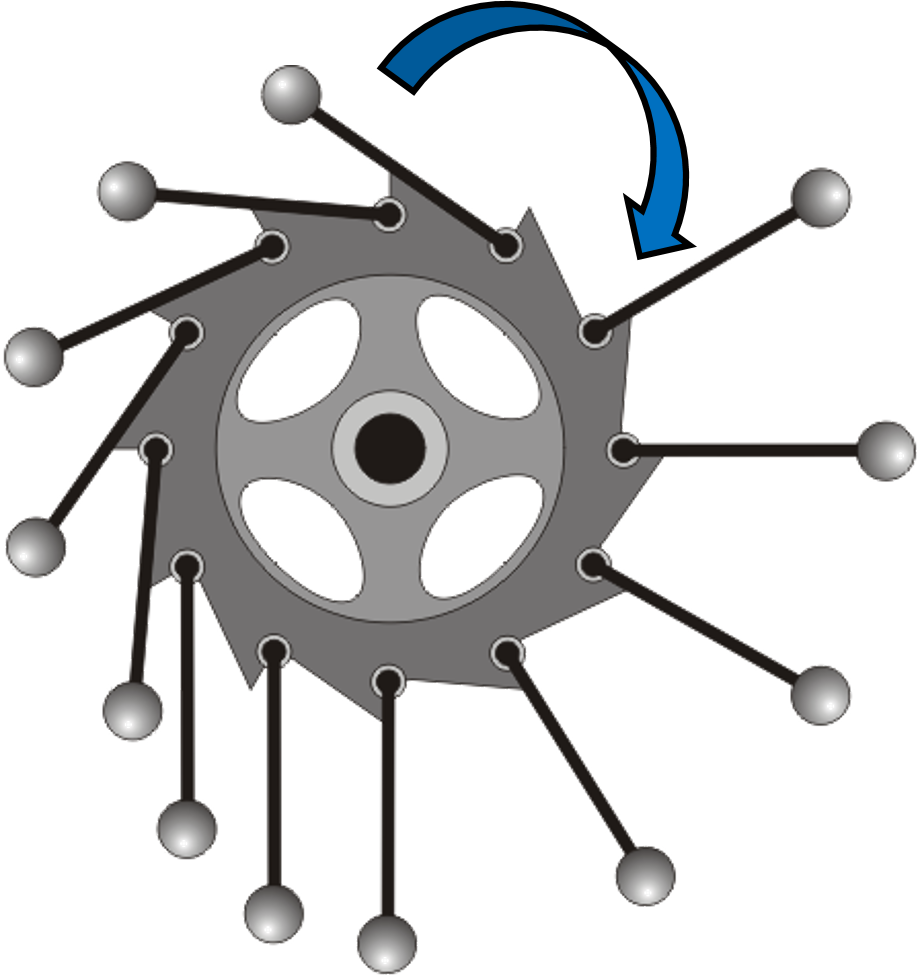 As you can see, the machine spins in a certain direction and can spin forever in a perfect world. That is what Feynman is referring to. However, as he states next, Perpetual motion machines DO NOT WORK IN REAL LIFE. Because there are dissipative forces, like drag, which makes the machine slowly lose energy and come to a halt. Even worse, perpetual motion machines are usually advertised and tried to sold as if they could generate energy. But generating energy means that you take energy from the system. So in the example shown in the image, if you were using it to do work, which in this case would be to spin a turbine or something to generate electricity, it would slowly lose its own energy (as it is transferring it away), and come to a halt.

As to the second paragraph, it would help a lot if you could post a picture of the image, as it is referring to it but we can't see it, and thus I would have to answer based on assumptions that might not be correct.

However, the whole theme seems to be to explain how perpetual motion devices do not work, so if you want to learn more you can check out Tedx's youtube video on the subject, which is quite good

Not the answer you're looking for? Browse other questions tagged gravity energy-conservation conservation-laws or ask your own question.