What determines the “strength of impact” of a falling object on the ground, momentum or energy?

I am considering free falling objects that eventually hit the ground. The objects have various masses and various final (ground-impact) velocities.

Hence, at the time both objects hit the ground:

Any answer to this conundrum: jump off or ride the ladder to the ground should take the rotational dynamics of the situation into account.

Consider the ladder as a long straight rigid rod, with mass $M$ and length $L$. The rod is originally vertical and rotates ninety degrees around the bottom end until it hits the horizontal ground. The Internet is filled with images and videos of this situations as applied to the demolition of tall chimneys (many in the "hold my beer and watch this!" genre)

The moment of inertia, $I$ of such a uniform rod is given by: $$I=\frac13 ML^2$$At the start of the fall, the kinetic energy of the rod is zero, and the potential energy is found by putting all the mass at the centre of mass:$$PE_1=mgh=Mg \frac{L}2 $$ At the end, the rod has lost all its potential energy, is rotating at an angular velocity $\omega$ and has acquired a matching kinetic energy. In terms of rotational kinetic energy:$$KE_2=\frac12 I \omega^2 =\frac12 \times \frac13 ML^2\omega^2=\frac16 ML^2\omega^2$$Equating the lost potential energy to the gained kinetic energy and rearranging, we obtain:$$\omega=\sqrt{\frac{3g}{L}}$$The linear velocity of the extreme top of the rod,$V_T$ is simply:$$V_T=L \omega = \sqrt{3gL}$$On the other hand, something leaving the top of the rod as it starts to fall will acquire the velocity for a body falling a distance $L$:$$V=\sqrt{2gL}$$ So the tip will be falling faster than gravity alone would explain. The rod transmits the force of gravity along its length to get the tip to speed up.

In the case of chimney demolition, the chimney is often not rigid enough to maintain this motion: 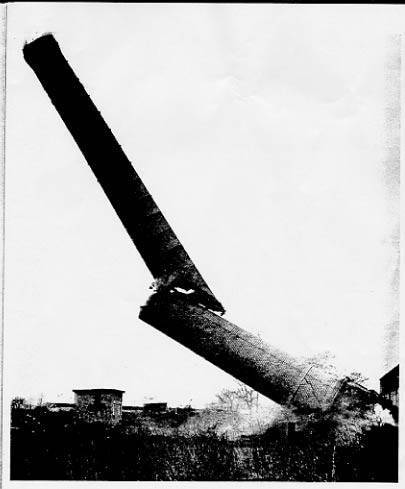 Note that the top part of the chimney cannot be pulled around by the bottom; the chimney breaks first.

Here my answer to your ladder problem and whether or not the person should jump (a) at $t=0$ or (b) just before the impact @ $t=T$. Furthermore, I am concentrating on the "damage to the person" and not on the damage to the ladder.

Let's consider scenario a: If we are standing on the ladder at height $h$ and we jump of the ladder immediately as it drops, we obtain an additional height $dh$ due to the jump. Thus, the kinetic energy at our impact on the ground is $E = m g (h + dh)$. Thus, this is even worse than not jumping at all.

In contrast, if we jump off the ladder just before we hit the ground, we decelerate. Hence, if we assume that we add the same energy to the ladder in both cases, we effectively hit the ground with $E = m g (h - dh)$.

There are other problems in comparing the box and the apple besides momentum and kinetic energy. The apple is a not a perfect sphere and will impact the ground a little differently depending on its orientation. The box, assuming it is a cube, can impact the ground on a corner, or on a flat side. Big difference in outcome there. The worst case is obviously if it impacts on a corner.

I will answer your question on the basis of concern to the damage to the ground, by substituting a sphere for the apple and the box. If you are interested in how much damage is done to the falling object, you will need to provide information on the physical properties of the objects.

The substitute sphere for the box will have the same diameter as the substitute for the apple but with a density 20 times greater to account for its mass being 20 times greater than your original apple. I will also assume the two spheres have the same rigidity. Now we can compare apples to apples (no pun intended. Oh heck, yes the pun is intended).

All other things being equal, the sphere with the greater kinetic energy upon impact should do the most damage. In order to bring the spheres to a stop, the ground has to do work on the sphere taking its kinetic energy away and transferring into the ground in the form of deformation which results in heat. The principle involved here is the Work Energy Theorem which states that the net work done on an object equals its change in kinetic energy. For the 0.1 kg sphere that is

Where $F_{ave}$ is the average stopping force and $d$ is the stopping distance of the sphere after it impacts the ground.

For the 2 kg sphere we have

The ground has to do more than twice the work to stop the 0.1 kg sphere than the 2 kg sphere. It should be emphasized that the above equations do not include the loss of potential energy of each sphere over the penetration distance $d$. That needs to be included to obtain the actual work required. Unless the penetration is very deep, it may not be critical in terms of comparing the two spheres since the kinetic energy of the 0.1kg sphere is more than twice as much as the 2 kg sphere. So I have not included that complication.

First off, you need to define precisely what you mean by the "strength of impact" - depending on how you do this, you will get different answers. If you define it to be, say, the energy with which the object strikes, then of course it will be the energy that determines the strength, by definition. So we have to think a little bit about what that should "best" mean. Given that you are talking about "safety", then it stands to reason what you are after is damage - i.e. the damaging power of the impact. In that case, though, the damage depends just as much on the kind of object as on the impact itself - e.g. consider dropping a basketball versus a glass sculpture of the same mass.

That said, the most reasonable variable you will want to look at here is probably the force generated upon impact. This is because "damage", in this sense, occurs when materials are subject to forces that exceed certain strength limits, which in turn are set by the cohesive forces holding them together. In particular, denting (plastic damage) occurs when the elastic limit of the material is exceeded, and fracture (breaking into pieces) occurs when the ultimate strength is reached.

The force generated on impact is, per Newton's second law,

with $I$ now the impulse, or change in momentum, delivered to the object. This will, for the case of hitting and stopping on a hard surface, equal in magnitude the object's original momentum.

So you would be tempted to say "momentum", but as you can also see, there is another factor, time, and that time depends in a complicated way upon other things like the object's velocity, the elasticity of the materials, and more and hence there isn't really any way to easily calculate it "from first principles" - you have to either do a full materials-physics simulation on a computer, or just measure the impact force empirically (usually the better and cheaper option).

Nonetheless, even with this, we can use intuition to make a rough idea that the apple will have the "worse" time, because while the needed momental change is much less, the much higher velocity means it has to stop a lot faster (a lot higher $t_\mathrm{imp}$). Indeed, from experience, we would "feel" that the apple will smash to bits. That said, depending on what your box is made of, it too could suffer damage since $30\ \mathrm{m/s}$ (= $30\ \mathrm{km/ks}$) is about highway speed.

Hence, the simplest answer would be "velocity, and the physical nature of the objects concerned".

However, the impulse is almost the same as momentum. So we can go for choosing momentum over energy. (Precisely, object's change in momentum is impulse.)

As the box has higher momentum, so the box will leave a greater impact.

Not the answer you're looking for? Browse other questions tagged newtonian-mechanics momentum collision free-fall or ask your own question.