Conformal gravity is an "alternative" theory of gravity, where instead of using the Einstein-Hilbert action composed of the Ricci scalar, the square of the conformal Weyl tensor is used. It was originally designed to arrive at the inflationary cosmological models without the use of dark energy.

However, it was later noticed that the galactic rotation curves of a certain matter distribution commonly seen in galaxies can also be accurately predicted using the conformal gravity and without the use of dark matter, but where in addition to total luminosity of the galaxy and its mass used in the matter distribution, two new constants appear. However, both of the constants turn out to be universal and are found to be equal for all galaxies (within the errors permitted by the deviation from the assumed baryonic matter distribution).

Based on what I've heard during a few talks, and from skimming what I can from papers like this, I think the answer is probably not. In essence, my understanding is that conformal gravity leads to a different form of gravitational potential from mass distributions---but it can't create potential gradients where there isn't mass.

If you look at a picture of the bullet cluster (e.g., from here), you can clearly see that the primary source of field is in an entirely different place than the baryonic matter distribution. 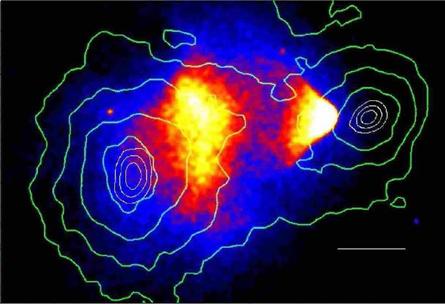 Not the answer you're looking for? Browse other questions tagged general-relativity dark-matter galaxies galaxy-rotation-curve galaxy-clusters or ask your own question.

3
Dark matter and dark energy
0
At what point do researchers in physics make the leap from wild theoretical ideas to physical experiments?

3
Does the recent re-count of stars in elliptical gallaxies affect our understanding of the universal mass balance?
0
Merger happening tangentially, but dark matter at both sides?
4
Do alternate theories for Dark Matter (like MOND) explain its effect on gravitational lensing?
9
Can curvature waves in f(R) theories explain gravitational lensing in cluster collisions?
1
Why does the gas in the Bullet Cluster act like a lens?
6
Does the bullet cluster prove that dark matter must consist of particles?
1
Do attraction between two galaxies count for dark matter?
1
Do the Bullet Cluster remnants prove that dark matter consists out of particles?