Let'se say we have two walls, wall A and wall B. Both walls are made from the same material, but they differ in thickness. Wall A is L cm, whereas Wall B is L + ΔL cm.

Wall A and Wall B make up parts of two separate compartments with identical dimensions, and in both compartments there is fire, causing the temperature to increase at the same pace in both rooms.

Consider a 1-D system of thickness $L$ (a slab) with conduction coefficient $k$, density $\rho$, and specific heat capacity $\tilde{C}_p$. It is subjected to a sudden temperature change from $T_o$ to $T_\infty$ on one side (the left side). The convection coefficient on that side is $h$. The resulting formulation and boundary conditions are developed in this example PowerPoint posting.

We can make this dimensionless and allow an unrealized temperature to be defined as $\theta = (T(z,t) - T_o)/(T_\infty - T_o)$ where $T_o$ is the temperature at time $t = 0$ throughout the entire slab. In dimensionless form, the temperature profile through the slab as a function of time and position is determined by the equivalent of Fourier's second law. A defining time constant of the system is found from the Fourier number

The Fourier number can be viewed essentially as the dimensionless time needed to reach a specific temperature $T$ at a specific position $x$ in the slab.

The exact solution requires separation of variables and is shown in the PowerPoint link. A simpler analysis is to show the case for unrealized temperature as a function of dimensionless position in a slab with the left wall held at $T_\infty$ and the right wall at $T_o$. Such a sketch is shown below. 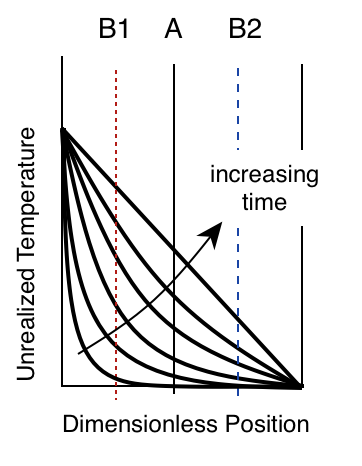 Not the answer you're looking for? Browse other questions tagged thermodynamics thermal-conductivity heat-conduction or ask your own question.

1
Per unit area, is there more heat transfer through the open top of a mug or the side walls?
0
When does heat conduction become convection?
4
Why does a salt water solution have a higher coefficient of thermal expansion (i.e. expands more) than distilled water?
0
Thermodynamical system
1
Energy Losses - Hot Water Tanks
0
Why does temperature remain constant in this case?