Does CMB rule out that the universe is infinite?

If the universe were infinite, the energy of the big bang would have been long dissipated, and very little or nothing would hit us. Does the fact that CMB still comes roughly the same from every direction prove that the Universe is bounded and that the radiation keeps bouncing at the boundaries?

The question was not clear enough or it has been misunderstood:

Now, if we spin back the 10 billion years, we find that the universe was a few cm wide, if the universe is infinite the energy liberated by the BB traveled in all directions and never came back. Can we conclude that there would be scarce or no CMB? How do you explain radiation coming from all direction if most energy was dissipated?

As has been discussed already, the term infinity is ambiguous and needs clarification to give a proper answer.

No, the CMB does not rule out an infinity of the spacial nature of the universe. Space can be infinite ›although‹ we see the CMB in all directions in the same strength and with the overall same features. Space itself isn't involved in the creation of the CMB, the CMB was created by the matter in this space.

No, the CMB does also not rule out the infinity of matter and energy in the universe, nor does it prove that the universe is bounded at some point and operating with reflections which would dissipate the origin of the CMB enough to make it shine from all directions likewise.

The CMB is arriving from all directions because we were inside the blob of matter which created the CMB. That blob of matter produced photons in all directions, not just directed to the outside. Instead, all the heat and events happening at that time created a fluid of photons from all points in that cloud to all directions (statistically speaking), so also to its own inside. Most of the photons will of course never arrive at where we are now because they are directed elsewhere. But some were already pointed exactly to the point in space where we are today (which is a point which was, at the time when the CMB was emitted, inside that area where the CMB happened; whether this point is today still inside that said area is rather a matter of reference).

Some of these photons have been very close to us when they started their journey, maybe just some light years in distance, so they should have arrived at where we are now just some years later, so we should not be able to see them today. But space took them with it when it expanded (that's the idea of space expansion: It takes everything with it, also photons). This expansion also reduced the energy and frequency of the photons by expanding their wavelengths as well. That's why we today see the originally high energy gamma ray photons as mere infrared photons which are extremely hard to detect.

With the emission of these photons a race was started between the photons moving with light speed towards us and the expansion of space itself. Had they been a little further off, the expansion would have won and these photons would never reach us. What we see today are exactly those photons which had been started in the sphere around us which had exactly the correct distance to us so that these photons today win this race. Tomorrow we will see the photons which were emitted in the sphere around us which was just a tiny bit larger and thus further away.

The diagram attached shows this expansion. We are located in the black spot, the green ring is the sphere which emitted the photons we see today, the triangles are the photons flying directly towards us. They change color over time to indicate their change of wavelength. When they arrive at the black spot they are dark red to indicate infrared.

So no, there is no bouncing necessary to explain our observations. The photons have been on their way for about 13.8 billion years but the green ring which emitted them is now much further away than just 13.8 light years and they were much closer than the 13.8 light years when they were being emitted.

The blob of matter which created the CMB may or may not be infinite, we wouldn't know, at least not by looking at the CMB. The diagrams display it as a circle of finite size and we are located not too close to the border (otherwise we would see a difference in the CMB in varying directions). But the circle might be an infinite field of such matter, getting stretched out by the expanding universe. We would see the exact same CMB.

This all doesn't mean the universe is actually infinite. It just states that this cannot be determined by looking at the CMB.

It might be interesting to mention that our whole observable universe, all photons which arrive at the Earth, are emitted inside the expanding green circle. Anything emitted just outside of it will reach us in the future (but really just a tiny bit of more layers will do so because they have been expanded along with space to immense measures), and anything far enough outside the green ring does not win the race against the expansion and will never reach us. That's the reason we call the microwave photons we see a ›background‹ (the B in CMB). 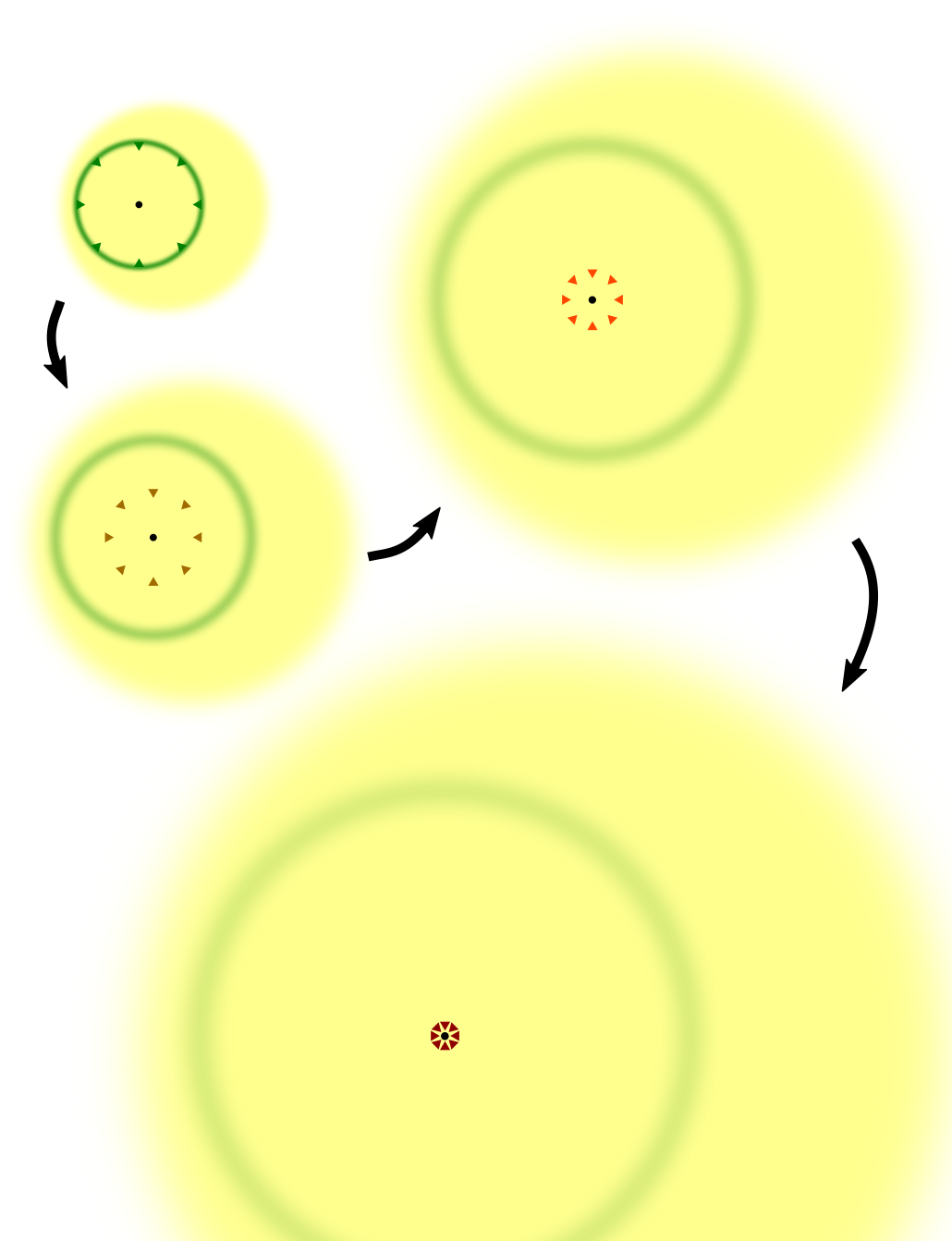 There are a few things to clarify:

There are two ways to say if something (our universe for example) is infinite:

Now in our universe, the case is possibly 2., infinite, meaning endless, you can travel in space without hitting the edge forever.

Yet, the Earth is infinite for the ant (who does not understand the bigger picture), who only lives in 2D on the surface.

Analogously, the universe is infinite for us, who live in 3D space, meaning, we can travel infinitely without hitting the edge.

Does this mean that the universe is infinite in age (in 4D in both directions, back in time and forward)? No.

The very important thing is to understand that the infinity (in this case endlessness) of space does not require infinite time.

Based on the comments, the question is rather why we see the CMB if the universe is infinite in size and all the radiation has diluted.

Now some people might make you confused asking questions like "why is the nightsky not dark then?"

It all comes back to the time dimension. The reason we still see light coming from other galaxies, and we see the CMB is that the universe is not infinite aged. The universe according to our currently accepted theory, the SM, is 13.8 billion years old.

This is not the case, CMB, radiation, just like other photons (like visible) are coming from all direction in the universe, and the farthest we see could have been emitted only as much as 13.8 billion years ago (but again this is for the whole universe, not only for the observable).

If we would see no CMB radiation (and no visible photons either coming from galaxies), that could mean two things:

Not the answer you're looking for? Browse other questions tagged cosmology spacetime space-expansion topology cosmic-microwave-background or ask your own question.

4
Looking out into the universe means looking back in time - how does that work?
4
Why the CMB has not been dispersed so far?
8
Will the CMB eventually recede outside our observable universe?
8
The Redshift of the CMB vs. Dark Energy
2
Cosmic Microwave Background seen from a hypothetical foreign Galaxy?
6
Why is CMB not considered as the edge of the universe?
7
Evidence before CMB
1
Why wasn't CMB radiation absorbed long ago, since when it was emitted the universe was much smaller?
28
Why is CMB an evidence of hotter and denser early Universe?