On what is the pressure in Relativity exerted?

In Relativity we have the stress-energy-momentum(-pressure) tensor: 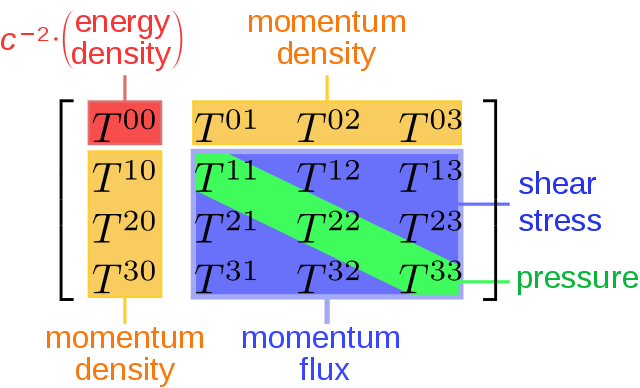 The three green entries represent three pressures (in this extensive article much is said about the pressure term, but I still don't understand the concept). But what are the origins of these pressure, on what do they press, and why are these entries called pressures?

In special relativity, energy is closely connected to momentum. Just as space and time are, in that theory, different aspects of a more comprehensive entity called spacetime, energy and momentum are merely different aspects of a unified, four-dimensional quantity that physicists call four-momentum. In consequence, if energy is a source of gravity, momentum must be a source as well. The same is true for quantities that are directly related to energy and momentum, namely internal pressure and tension. Taken together, in general relativity it is mass, energy, momentum, pressure, and tension that serve as sources of gravity: they are how matter tells spacetime how to curve.

What is, for example, meant by the pressure of light (and the tension part that goes along with it, like the time part of a four-vector and it's associated space-part)? Is it literally the pressure (as it is for massive matter) that the light exerts on... eeeh... what? Pressure has, of course, the unit ($\frac N {m^2}$), but how relates this to a force? With which area you have to multiply it to find a part of the force in Relativity?

Maybe these are too many questions in one, but I think it's clear what I mean.

You are probably used to thinking of pressure as force per unit area. Since force is the rate of change of momentum, pressure in the $x$-direction is alternately the $x$-momentum crossing an imaginary surface with normal $\hat{x}$, per unit time per unit area. It does not have to be exerted on anything. A gas has pressure regardless of whether the atoms or photons are actually hitting anything.

In theory, the energy-momentum tensor conceptually has contributions from of all fields other than the metric field: quark fields, gluon fields, electron/muon/tau fields, photon fields, neutrino fields, W and Z fields, and the Higgs field all contribute to it. Their total energy-momentum tensor determines the Einstein curvature tensor and thus the metric tensor through the Einstein field equations.

In practice, one typically does cosmology with simple “matter”, “radiation”, and “dark energy” contributions to the energy-momentum tensor. “Matter” means non-relativistic matter, for which the pressure can be approximated as zero compared with the energy density. This includes both regular matter and “cold” dark matter. “Radiation” means photons or highly-relativistic matter such as neutrinos or “hot” dark matter, which have an approximate equation of state where the pressure is one-third of the energy density, in units where $c$ is $1$. “Dark energy” is something that has a peculiar equation of state where the pressure is the negative of the energy density. Scalar fields can have this behavior, so it’s not too peculiar to be plausible.

Not the answer you're looking for? Browse other questions tagged pressure relativity stress-energy-momentum-tensor or ask your own question.

6
Could Dust Equation of State have some negative pressure?
8
Negative pressure, tension, and energy conditions
23
Intuitive understanding of the elements in the stress-energy tensor
0
Stress-Energy Content
2
Pressure in General Relativity