I am currently reading the book "Advances in Atomic Physics: An Overview" by Cohen-Tannoudji and Guéry-Odelin. In pages 29-31 the authors discuss a two-level atom subject to a broadband radiation field. More concretely, they derive the transition rate from time-dependent perturbation theory

Here $W_{g\rightarrow e}$ is the transition rate from the ground state to the excited state, $D_{eg}$ is the dipole matrix element and $I\left(\omega_{0}\right)$ is the power spectral density of the field evaluated at the transition frequency $\omega_{0}$. This transition rate is related to the relaxation time $T_{\rm R}=1/W_{g\rightarrow e}$ (similar to Einstein's $A,\:B$ coefficients) which dictates the average time it takes until an absorption happens.

On the other hand, the authors mention the correlation time of the field $T_{\rm C}=1/\Delta \omega$, where $\Delta\omega$ is its bandwidth. They comment that this is the actual duration of an absorption process. The difference between those two times is stressed in Sec. 2.5.2 in page 31. I attach here an illustration of those two times, as I understand them, for the case of spontaneous emission. 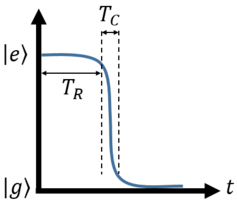 While I understand there should be such two time scales and agree with the derivations, I feel a little bit of discomfort. My two major concerns are as follows.

In most of the resources I am aware of, it is usual to use the phenomenology of the time-energy uncertainty relation while treating transitions. However, I would appreciate it if someone can refer me to a treatment of the problem which introduces both processes more rigorously, side by side.

Update 1: To sharpen point (1), consider several fields with increasingly narrower spectrum. As the spectrum gets narrower, the duration of an atomic transition gets longer and longer. In the monochromatic case, where is the diverging quantity in the mentioned models?

The discussions in Section 2.5 of the book relates to a two-level system interacting with a broadband field. The two timescales emerge naturally because the spectrum of the broadband field $I(\omega)$ is characterized by two quantities: a) its spectral width $\Delta \omega$ and b) peak value at the resonance $I(\omega_0)$.

Having said that, it is not surprising that you do not need to look out for the two timescales $T_R$ and $T_c$ when you are considering a different problem: a two-level system interacting with a strong monochromatic field. The main quantities of interest here is the strength of the monochromatic field and its frequency detuning from resonance, and this gives us the generalized Rabi frequency, which tells us how the system oscillates between ground and excited states (how long a period, or duration, of the transition is).

Regarding your second point, after reading the book, I would have said the linewidth is actually related to the average time it takes to make a jump, and not to the duration of a transition. The book explains that the duration of the quantum jump is related to the correlation time of the broadband field. But the linewidth is related to how strongly an atom couples to the environment (proportional to density of states of light, and also to the matrix element), so the equation $W_{g\to e} \propto |D_{eg}|^2 I(\omega_0)$ is the most relevant in calculating the atomic linewidth. Also, experimentally, when we try to observe the decay of an excited state, we will wait for the click of a photodetector, and hence it measures the average waiting time.

Update: I had a discussion with my colleague, and he mentioned that the explanation of the linewidth related to $|D_{eg}|^2 I (\omega_0)$ is a bit vague. As per your comment, the linewidth is an property of the excited state, regardless of whether there is a laser switched on. So if the laser is switched off, where is the "intensity" $I(\omega_0)$? It is actually related to the fluctuations in the EM field vacuum. When we use Fermi's golden rule, we use $|H_{eg}|^2 \rho(\omega_0)$, where $H_{eg}$ is the interaction matrix element and $\rho$ is the photon density of states. Now if we use the dipole Hamiltonian for atom-light interaction, $-D\cdot E$, you can pull out $E^2$ and put it next to your photon density of states. That becomes the power spectral density of the vacuum $I(\omega_0)$, and our $H_{eg}$ is reduced to $D_{eg}$.

And to accentuate my answer to question 2), when you say " Yet, it is common to say that Δ=1/Γ is the width of an atomic line (and as a consequence, of the pulse it emits)" this is not correct, or the reasoning is wrong. I don't think I have come across any literature that says linewidth is related to the size (duration) of the photon wavepacket emitted by an excited atom. We (atomic physicists) all understand linewidth to be related to lifetime of an excited atom, or an average waiting time for a photon to be emitted from the excited atom.

Back to question 1), if I re-interpret Cohen-Tannoudji, what he calls "duration" is the time over which coherence between excited and ground state is still there. In the limit of narrowband radiation, this diverges. In the limit of broadband radiation, this dies out, even before the excited state has time to evolve (1/Bohr frequency, and Bohr frequency here is ~100 THz or more for optical t transition). But when we discuss Rabi oscillation, what we usually mean by "duration" is how fast we can flip a Bloch vector from ground state to excited state, and it is given by how strong the Rabi frequency is. So I think there is some semantic issue going on with the word "duration".

The case of near-monochromatic radiation (compared to the natural line width) can not be described by separate absorption/emission events anymore. It has to be described as resonance scattering process which is a coherent single-quantum process. This is derived in detail in §15 (Resonance Fluorescence) of the book 'The Quantum Theory of Radiation' by W. Heitler, which can be found on the Internet Archive.

In this case it is not possible to say in which energy state the atom is, and thus you can not really speak of a transition either. You can do this only in case of an incoherent re-emission i.e. when the atom is disturbed by other processes (e.g. collisions). In that case you would observe the natural line width again.

Not the answer you're looking for? Browse other questions tagged quantum-mechanics atomic-physics absorption photon-emission two-level-system or ask your own question.