Why do the inner tyres of a vehicle rise when taking a turn at high speeds? 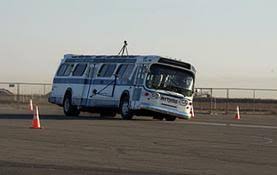 Now if in place of the cycle, we keep a bus, then similarly bus needs more centripetal force and hence the normal component should rise by bending the bus inwards. But if we consider common experience, bus bends outwards, raising the inner tyres. Does this not lead to normal reaction being applied away from the centre of the circle? Why does this happen?

When you go around a corner on a bike your body (and bike) leans toward the inside of the bend, to avoid being thrown over by centrifugal force (inertia).

If you were to attach a cable to the center of gravity of the bus and pull in a horizontal direction (at right angles to the long axis of the bus), the forces would be about the same as in the above case. Pull hard enough and the bus will tip over. The lower the center of gravity, the harder the cable will need to pull.

There is a rule: an object (set on the ground) will not topple as long as its weight force points to the ground within its supports. In other words, the bus does not topple so long as the imaginary arrow of the combined weight force (gravity force plus centrifugal force) ‘contacts’ the ground between the left/right or indeed forward/rear vehicle wheel pairs (see diagram below).

As the ground contact position moves beyond the outer wheels, the inner wheels are no longer supporting the vehicle weight, and thus the vehicle will generally tip over. 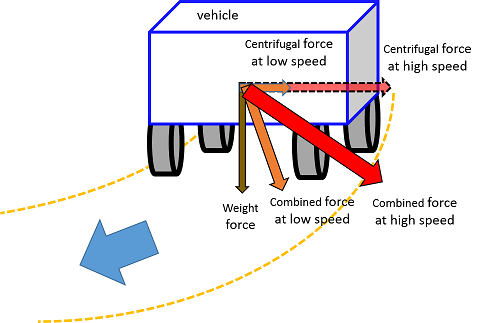 Not the answer you're looking for? Browse other questions tagged newtonian-mechanics forces torque centripetal-force centrifugal-force or ask your own question.

3
Countersteering a motorcycle
2
Reference frame and centrifugal force
2
Turning on a straight, unbanked, frictionless road
2
Banking of road
0
Is Khan Academy wrong on centripetal force calculation?
2
Object on a banked curve
1
Why do vehicles executing circular motion tend to over turn outwards and not inwards?
0
Why does speed affect turn radius when turning a motorcycle given a fixed lean angle?
0
Does the static friction act towards the center of a path when a cyclist bends?