Why does a force divide equally on multiple supports/legs? 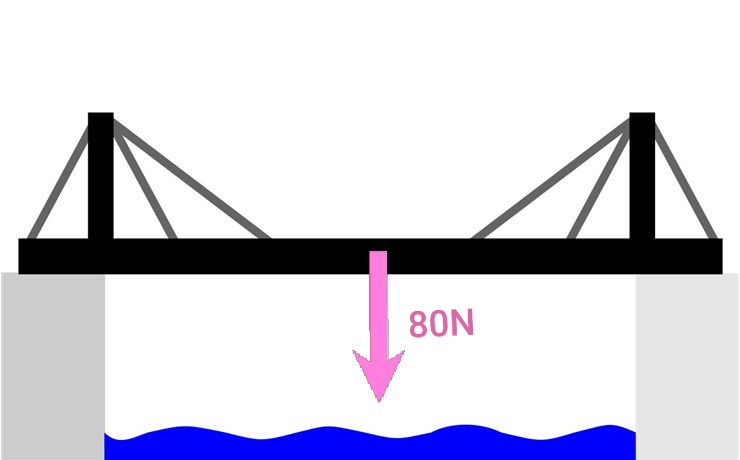 Imagine a bridge spanning across two pillars/supports with a weight of $80N$. {Any external forces affecting the system are assumed to be negligible.} 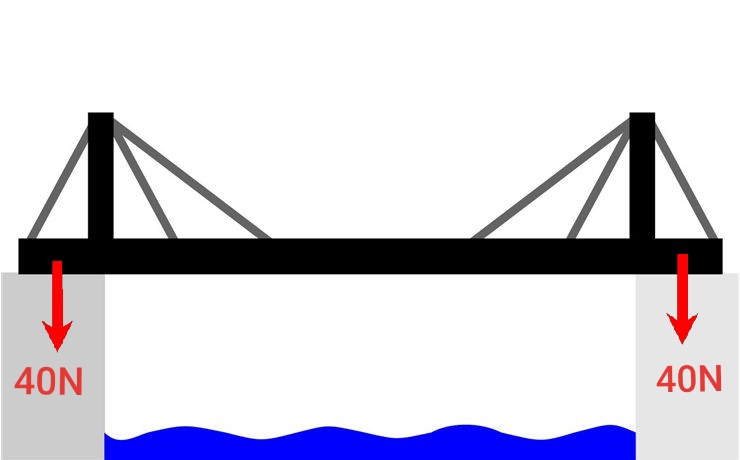 We know that the force exerted on these 2 support is $40N$. This is very intuitive and is completely sensible, at least to me, and I believe to all of us.

But, this strange, or rather absurd, question got into my head this morning: why should each individual support experience a force of $40N$?

The answer that came from me was "it's impossible, how can those 2 support experience different forces." Here's what I did to prove my thought was simply incorrect. 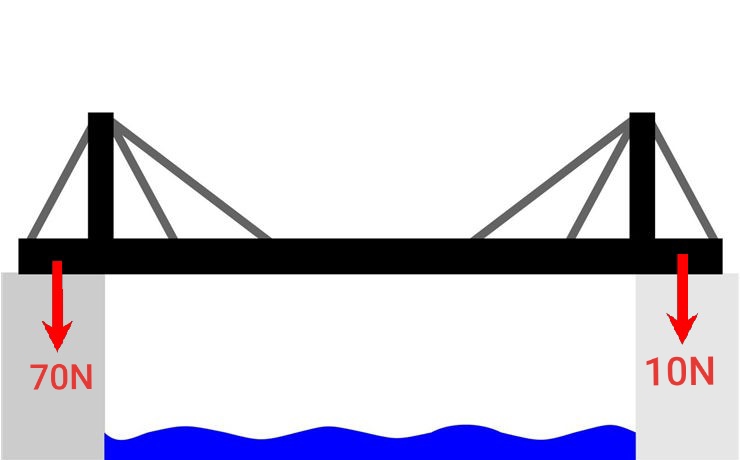 Now if you disagree that both support/concrete experience different values of force, just take a look at the diagram above. How is it even possible that one of them experiences 7× the amount of force the other one does. Imagine you and your friend carrying a heavy shelf across the room, and you were surprised that he is exhausted after experiencing most of the shelf's weight and you barely feeling anything, even when lifting it with the same force.

Now moving to the Main Question. For all the of the context above, Is there any more "Physics-al" or Mathematical proofs to support my answer? as I'm not totally convinced with my answers as they are only on the basis of "well, it is impossible and doesn't make any sense"

For a body to be in stable equilibrium it's not just the net force acting on it is equal to zero, but also the net torque acting on the body should be zero.

Since the object is stationary you can take torque about any point and at CM this would be the most convenient and it would not include the torque generated by the mass of the bridge.

One reason they are the same is because of symmetry. Physics follows mathematics in that if you can draw a line of mirror symmetry with what is on one side identical to the other side, then the equations will be identical. For your bridge this will mean if its mass distribution to the left is the same as to the right then the forces must be identical.

If the mass distribution is not uniform, say the centre of mass is right of centre, the forces will have to be different in order to balance: $F_{left}r_{left} = F_{right}r_{right}$ in this case with greater force on the right to counteract its shorter distance to the centre of mass. In this way in moving furniture, the person closer to where the weight is centred will do more work.

Symmetry arguments can be very powerful, and sometimes can provide an answer very quickly. The torsion arguments above are perfectly valid, and provide the general case. In this particular case, however, you might ask yourself, "Why WOULDN'T they be the same?" Looking from the left, the situation is precisely the same as looking from the right. Consequently, there is no way to fundamentally assign either side as "left" or "right". Any such assignment is arbitrary, and so they must be identical. This is known as the principle of parity. Until the middle of the 20th century, parity was thought to be a law of nature, but then the electro-weak force was shown to violate parity in certain circumstances, so now it is merely a very broadly applicable special case.

Consider also a dynamic case, which I also often find very helpful. Let us say the right hand support in the picture is not fixed, but can slide underneath the bridge. As we slide the support towards the middle of the bridge, the weight on the right hand support will indeed increase, and the weight on the left hand support will decrease until the support reaches the middle of the bridge. At that point, the bridge will be balancing upon the right hand support (now the center support), and as long as the bridge's mass is uniform and the two supports are the same height, the entire 80N will rest on the center support, with no weight at all on the left support. If we continue to slide the middle support to the left, then the force on the support will increase BEYOND 80N, and the force on the left support will be negative, or in the upward direction. The vector sum of the two forces will still be 80N in the downward direction, but the force on the middle support can become huge. This is how a nutcracker works. The force supplied to the nutshell can be dozens of times the forces supplied by one's hand, because the nut is relatively close to the fulcrum and relatively far from the hand.

Consider also the validity of your initial statement in terms of the advantages of a tripod over a four legged table. Have you ever been to a restaurant where the table was wobbly because either the floor was uneven, the table had one leg that was a little shorter than the other three, or both? In general, the weight of an object does not distribute equally among multiple supports, as commented above.

Kudos, by the way, for not rejecting an idea out of hand just because it does not seem to make any sense. "Common sense" is NOT a good method of approaching scientific investigation.

The best way to answer these questions is to quit guessing and actually calculate the forces, such as using the method of user232243 in another answer.

If you must use just logic, rather that a calculation, then in this case if we assume uniform weight distribution over the span of the bridge, the forces on each side must be the equal or the bridge will rotate. This is equivalent to requiring the torque be zero.

An interesting deviation to this problem that still maintains symmetry is the case where there is a third support in the middle of the bridge. In that case, the left and right supports will be equal, but they will be different from the middle support. The physical properties (Young's modulus, areal moment of inertia) of the bridge are needed to make that calculation.

They divide the forces equally because we designed the bridge that way.

For an utterly trivial example of how they might not be equally distributed, find a heavy box, and a raw egg. Hold the box over the egg, and ever so slightly let the box down until its slightly resting on the egg. The egg is clearly receiving some of the force. If it received half of the force, you'd be on cleanup detail.

For bridges and the sort, we tend to be approaching the physical limits of our materials. Accordingly, we design them so that the forces are nice and evenly loaded.