How to calculate induced emf of moving rod?

I have the following exercise: 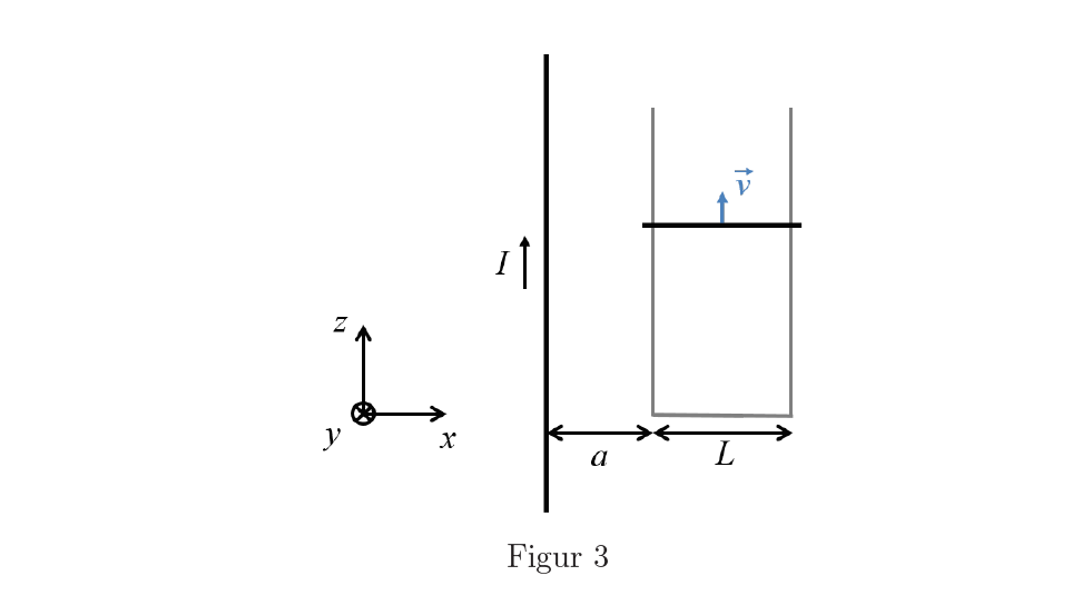 A copper rod with length L is moving on two frictionless conducting rails, in a distance a from an very long straight conductor. The rods resistance: R. Ignore any self inductance. The magnetic permeability is $\mu_0$

a) Find the direction and magnitude of the induced current.

I know I could probably just use faradays law finding the induced emf:
$\mathcal{E}=-\frac{d \Phi_{B}}{d t}$

And even if I chose my dL-vector to go in the other direction and integrate from a+L to a. I would get the same result.

What am I doing wrong here?

And even if I chose my dL-vector to go in the other direction and integrate from a+L to a. I would get the same result.

This is not correct.

Vector $d\vec L = dL\hat i$ is to be interpreted as $dL$ being the component of a step in the $\hat i$ direction.
As $dL$ is a component it can be either negative or positive.

Once you have put limits on your integration whether the step is negative or positive is fixed and you do not need to do anything more other than evaluate the integral.

As a simple example, Suppose you want to find the displacement when moving between position $a \hat i$ and position $b\hat i$ and the step is $d\vec x = dx\hat i$.

Note that in both cases the indefinite integral is $\int dx$ and whether you moved in the direction of $\hat i$ or $-\hat i$ was determined by the limits of integration ie the values $a$ and $b$.

In terms of Lenz, the magnetic flux through the loop is increasing so the induced current will try and reduce that increasing flux (produced by the $B\hat j$ field) by flowing anticlockwise producing a magnetic field in the $-\hat j$ direction.

Not the answer you're looking for? Browse other questions tagged electromagnetism classical-electrodynamics electromagnetic-induction induction or ask your own question.

2
Direction of integration and boundary limits in electromagnetism?

0
determining Induced emf/current through v x B . l
2
Faraday's saw from Lorentz force in the case of a moving conducting rod: how must the vectors be oriented?
0
The trouble with EMF induced in the coil of wire
0
Is induced EMF proportional to the square of the number of turns of a solenoid?
2
Direction of integration and boundary limits in electromagnetism?
6
How is it possible for the induced emf to take negative values in Faraday's Law of induction?