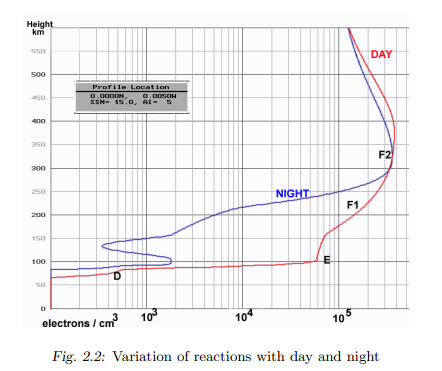 So, I wanted to know why is the recombination rate in F2 layer very low.

The ionosphere is the boundary layer between the Earth's neutral atmosphere and the ionized, magnetized gas surrounding it called the magnetosphere (technically, the ionosphere is part of Earth's thermosphere). At low altitudes, the charge--neutral interactions can play a dominant role and even control the dynamics of the gas (e.g., neutral winds can push charged particles around affecting radio communications in some cases). At higher altitudes (e.g., F layer and above), the gas starts to behave more like a quasi-neutral gas exhibiting a collective behavior based upon long-range forces, called a plasma.

Though I should note that even at lower altitudes, the gas can be characterized as a plasma too. The distinction largely results from the region where radio waves are affected by variations in the free electron density, which determine the local plasma frequency ($\omega_{pe}^{2} = \tfrac{n_{e} \ e^{2}}{\varepsilon_{o} \ m_{e}}$).

The total ionization state of the gas is generally defined by the Saha equation.

So, I wanted to know why is the recombination rate in F2 layer very low.

A Strömgren sphere describes the boundary between mostly neutral and mostly ionized gas. In other words, it is a sharp boundary in the optical depth of the medium to ionizing radiation.

Not the answer you're looking for? Browse other questions tagged electrons atmospheric-science plasma-physics geophysics or ask your own question.

4
What is the mean ionospheric height?

4
stability of hypothetical lunar atmosphere
2
If a hot Jupiter was not tidally locked, then are there any specific cases where its wind speeds would be milder than those found on Jupiter?
5
Plasma recombination rate
1
Why does the breakdown voltage increase when the separation between the electrodes is decreased beyond a particular value?
1
In LED's do the number of charge carriers (electrons and holes) decrease with time?