If the mass of the Earth is decreasing by sending debris in space, does its angular momentum also decrease? [duplicate]

We are sending huge amount of debris into space from earth, and also very heavy satellites and rockets, then the mass of earth must be decreasing over time. If the mass will decrease, then gravitational attraction between earth and sun must decrease, and its angular momentum must decrease, which would result in greater orbit of earth and earth being cooler over the time, but instead the temperature of earth is increasing, why is it so?

Active Oldest Votes
14
$\begingroup$
Want to improve this post? Add citations from reputable sources by editing the post. Posts with unsourced content may be edited or deleted.

The mass of material sent into orbit may seem huge to a naïve observer, but it is nothing at all compared to the mass of the Earth and wouldn't result in any detectable change in its orbit or rotation. Meanwhile, the mass of the Earth is actually increasing as it picks up dust, meteorites and micro-meteorites on its passage around the sun. A certain amount of the upper atmosphere is gradually leaking into space, but that is more than offset by the space debris which arrives. The majority of orbiting satellites will eventually fall back to Earth.

The existing answers are already sufficient, but it is also important to emphasise that if a satellite is sent to Earth orbit, then the launch does not affect the Earth's orbit around the Sun, because the Earth and the satellite continue to interact gravitationally, and the angular momentum of the Earth+satellite system is unchanged.

For there to be any effect on Earth's orbit, the spacecraft needs to be sent off into deep space (i.e. so it is no longer gravitationally bound to Earth), and only a select few spacecraft have been sent there.

As mentioned previously, the total mass and momentum of the spacecraft that have made it to space is negligible compared to the inertia of the Earth's mass. Selecting down to the couple dozen spacecraft that have left the system makes that comparison even more lopsided.

Not only is the mass tiny (as explained in other answers), considerable amount of material is outside the equatorial plane (see image below). Objects orbit in a plane, and the angle this plane makes with the equator is called inclination. The larger the inclination angle, the less of a decrease in Earth's angular momentum will occur. 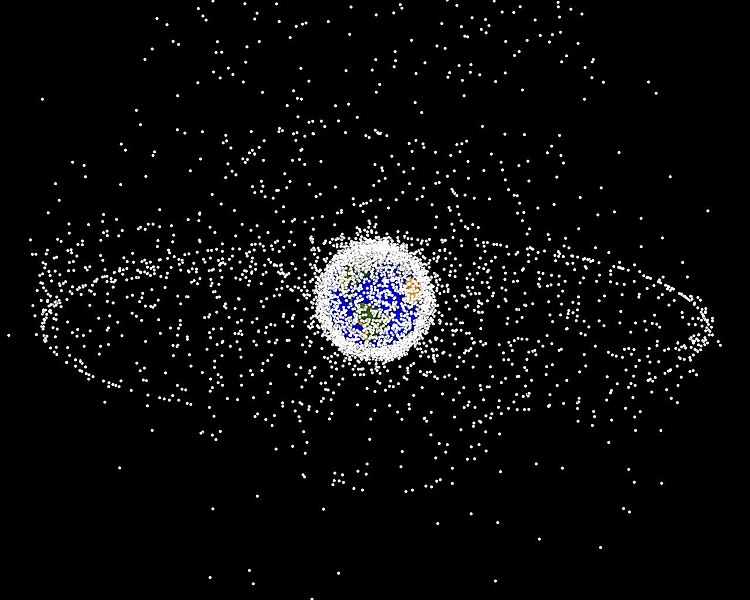 Are there reasons for using specific orbits?

Okay, but why not launch everything else into a 0° equatorial inclination?

Thus, spacecraft vary in how much they change the Earth's angular momentum, and some actually increase it.

All the existing answers nicely explain the issue, but I'll add some numbers to the discussion:

In 2018, 112 objects have been launched to orbit. Let's assume a typical rocket mass of 500 t and a payload of 10 t (values for the Falcon 9). Of these 112 objects, 30 were launched into high orbits where part of the rocket exhaust may have escaped Earth's sphere of influence (SOI), and four (Elon Musk's Tesla Roadster, InSight, Parker Solar Probe, and BepiColombo) were launched into interplanetary orbits where they and their upper rocket stages, escaped Earth's SOI themselves.

Assuming that 2018 is a representative year and those guesses are about correct (variations from 0.1 to 10 would be possible),

As discussed in the other answers, the mass of satellites that stay inside Earth's SOI has no influence on the distance between Earth and the Sun. The only relevant part is the $3 \cdot 10^5\ kg/year$ that are launched away from Earth.

As you correctly noted, the mass itself isn't relevant, the impulse is, so let's assume that the mass leaves Earth at 10 km/s. The fastest-ever spacecraft to leave Earth was New Horizons at 16 km/s, while a typical Mars transfer takes 6 km/s. Rocket exhaust is typically much slower, on the order of 3 km/s.

But in which direction is the force applied? For interplanetary probes the ejection direction depends on your intended destination and transfer plan, while for rocket exhaust from satellites in high orbits it's pretty much random. All in all, I guess that it will pretty much even out. After all, in 2018 two launches were to higher solar orbits and two were to lower solar orbits.

The orbital energy of Earth is calculated as $ -\frac{ G \cdot M \cdot m_{Earth}}{2a}$, where G is the constant of gravity, M is the total mass of the Earth-Sun system, and a is the semi-major axis (average distance between Earth and Sun).

The power at which Earth is accelerated or decelerated is $\frac{dE}{dt} = Fv$, where F is the force of acceleration and v is the orbital velocity of Earth. We arrive at

While rockets seem huge, they are mostly fuel. Most of the fuel is burned up in the atmosphere, and never leaves Earth. The boosters usually return to Earth, so only a relatively small payload remains in orbit, or leaves orbit outward.

The other part of the question is about why removing this mass doesn't affect Earth's orbit. A, possibly surprising, fact is that even if you decreased the mass of the planet by a significant amount you would not actually change its orbit. That is because mass comes in numerators and denominators in the relevant equations, and cancels out.

You mention "then gravitational attraction between earth and sun must decrease". That is true. If you halved the mass of the Earth, you would get half the gravitational force on it. However, because force is mass times acceleration, when you halve force and you halve mass, you are left with the same acceleration. The other fact is that the momentum of the Earth decreases when this mass decreases. Again that is true: momentum is proportional to mass times velocity. Once again though, that does not mean that it's going any slower. There is just less of it going as fast as before.

Fundamentally, orbital radius is a function of tangential velocity and centripedal acceleration, and neither of those has changed. Therefore even if we had launched an impossibly huge proportion of the planet (assuming we put it in orbit or disperse it equally in all directions) that wouldn't cause the planet to orbit further from the sun.

The amount of debris we are sending is so small in comparison to the total mass of the Earth, it is probably less than the error involved in measuring the total mass....

So, any change in angular momentum will be "lost" due to the errors involved.

Not the answer you're looking for? Browse other questions tagged newtonian-gravity angular-momentum rotational-dynamics planets estimation or ask your own question.

18
Do mankind and manmade activities/constructions have any effect on the rotation of the Earth?
4
Is Earth's orbit altered by recoil from take-off/launch/recovery of aero/space vehicles?

0
Why Sun is not able to attract mercury closer?
5
How much mass must Earth lose to lose its Moon?
1
Does gravitational force tend to zero over large distances?
5
Why are large planets away from the Sun and smaller planets near the Sun?
8
Entropy and gravitational attraction
27
As the sun expands, will its Roche limit also expand?
1
Conservation of Angular Momentum — Earth-Moon System — Earth spin backwards?