How should we do dimensional analysis when we have derivatives, logs, exponents and trigonometric functions in an equation. Should we assume that the operands are pure dimensionless numbers? Coming from a chemist's perspective, the simplest example is that of pH is defined as the negative logarithm of hydrogen ion concentration. Lets us take the unit of concentration as molarity = moles/Liter. One way to circumvent this is that some people say one can normalize the concentration by dividing by a unit concentration. As a result, the log operates on a dimensionless number and pH is then dimensionless.

For example Hecht*, in his celebrated Optics writes "It's necessary to introduce the constant k simply because we cannot take the sine of a quantity that has physical units. The sine is the ratio of two lengths and is therefore unitless. Accordingly, kx is properly in radians, which is not a real physical unit"

What is the opinion of physicists on dimensional analysis when a equation involves transcendental functions and derivatives?

The main reason why the argument of transcendental functions has to be dimensionless is that these functions are actually the convergence function of an infinite power series. Because the terms in the series have different powers, it is impossible to add the terms if there is a dimension attached.

which we cannot add. From here the requirement of having a dimensionless argument.

As a follow up to Alonso Perez response, I found an article in the Journal of Chemical Education, "Can One Take the Logarithm or the Sine of a Dimensioned Quantity or a Unit? Dimensional Analysis Involving Transcendental Functions" 2011, 88, 65.

Quote from the above mentioned article: 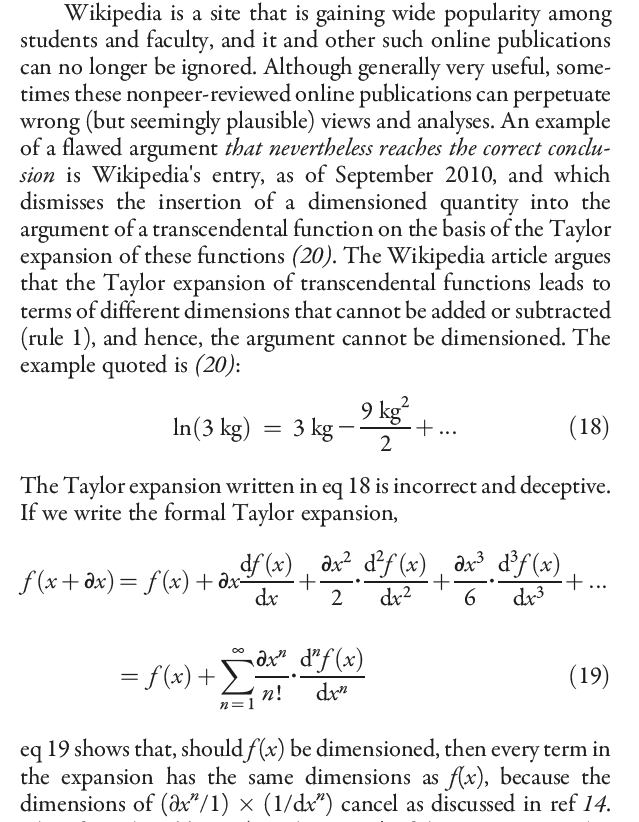 It is not as simple as it seems. We tell the children they should never take a transcendental function of a dimensional quantity and that keeps them safe. (Derivatives, as @G.Smith points out, are not a problem and do not belong in this discussion.)

But if it is true that, say $p=mv$ it is manifestly true that $\sin p =\sin (mv)$. That is an acceptable equation. We could even (if we wanted to, I can't think why) say $\sin p = \sin m \cos v + \cos m \sin v$. It looks horrible, but if you punch the numbers into a calculator or computer program they will work.

So if you have such a function (sin, cos, log, exp and similar) the argument is probably dimensionless, but there can be exceptions in some weird cases.

I would instead say that the way dimensional analysis works in the first place is based on the idea that you cannot take an arbitrary function of a dimensionful quantity, only a dimensionless quantity.

Taking an arbitrary function of such a dimensioned quantity is technically definable even when $q\ne [0,0,0,0,0,0,0].$ One could simply define that $$\operatorname{lift}[f](r, q) = (f(r), q).$$ However this does lead to some very strange things like $x \times x \ne x^2.$ This approach does not really capture the “why” we are doing what we are doing, just the “what” we are doing.

This captures the “why” much better as it gives a reason, for example, why addition can be well-defined only when the dimensions are the same.

Arbitrary functions do not have a clear well-defined way to be applied to these equivalence classes directly, of course, unless the unit is the empty unit and hence the equivalence class is just the number itself, $\{(\bullet, \pi)\}$ for example.

So for example if something is falling from space to Earth, you might be interested to figure out the time it takes to do so; this depends on the starting distance $r_0$ from Earth, and the mass of earth $M$ and the gravitational constant $G$ and its initial speed $v_0$. There is only one dimensionless constant and so the fall time must have some representation like $$t = \sqrt{\frac{r_0^3}{GM}} ~f\left(\frac{r_0 v_0^2}{G M}\right),$$ for some function $f$. The reason I know this is that no other arbitrary functions are well-defined.

Not the answer you're looking for? Browse other questions tagged physical-chemistry dimensional-analysis or ask your own question.