Time dilation and twin paradox - can this be explained in plain English? [duplicate]

If one twin goes with an extremely fast rocket to Alpha Centauri and back, time is going slower for him, so when he comes back, the twin that stayed on the Earth is older.

But... if we look from the relative position of the rocket, the Earth rushed 4 light years away and then came back -- so the twin on the rocket should be older.

When the rocket is at cruising speed, neither accelerating nor decelerating, aren't Earth and the Rocket equally "correct"?

But then acceleration and deceleration cause time dilation and not speed?

I know there are multiple questions already there about twins, but I can't understand the answers...

Can this be explained for someone with no physics background, in plain 5th-grade level English without manifolds, integrals, homotopy, etc?

The twin on the rocket changes inertial frames. The twin on Earth does not. This is why the situation is not symmetric. If you want to not invoke acceleration, then do the following. At the time the twin would (instantaneously) turn around, instead just have a third twin (triplet? I guess it can just be some other person) that is traveling towards Earth pass the rocket twin and synchronize clocks. Then follow the third person back to Earth.

The conclusion is still the same that the rocket trip takes less time, and this shows that it isn't necessarily the acceleration, but rather the change in reference frames associated with an acceleration.

There are multiple questions here. There is a difference between the special theory and general theory of relativity. First of all where there is relative motion at a constant speed the apparent effect is symmetric. It is not correct to say that time is slower for the moving twin as either twin could be moving. The effects of SR are applied to time intervals and distances in one frame as seen by the other frame. There is a concept of proper length, proper time, and proper mass, etc. These are the measurements in the local rest frame. So the twin on earth has a clock, and the twin on the rocket has a clock. The clock on the moving rocket is not slower, but the twin on earth will see those intervals as extending for longer periods in their own frame. And, likewise, the twin on the rocket will see the earth twin's clock as ticking longer (slower) time intervals. This is not a statement about the clock in it's proper rest frame, rather it is a statement about how intervals in one frame are observed in another, relatively moving, frame.

In his original work Einstein was considering one observer describing events happening in a relatively moving frame and the apparent time difference between events. All of which is "observed" by sending and receiving reflected light signals. The behavior of light is at the heart of SR.

Now acceleration is equivalent to local space-time curvature or gravity so we enter the general theory (GR). The resolution of the paradox lies in the asymmetry of the situation, i.e. that one twin accelerated to leave and later meet the other. However, what might happen if both twins left on trips in opposite directions and later met? What if the conspired to travel in opposite directions, making round trips with exactly the same acceleration and deceleration? Would the twins not return with everything in sync? In reality both twins do move since only the center of mass of the system remains fixed. Rather than leaving earth what if one twin left a space station and the rocket and space station were equal mass? Then both are moving relative to something.

As it turns out clocks farther from the surface of the earth do run faster than clock closer to the earth and this effect is not symmetric as it is due to the local gravitational field. Gravity will encrypt a time difference (that is a difference in the passing of time) in otherwise identical systems.

As to your question: "Can it be explained?"

No, it cannot. However, what can be done, and is done by all authors, is to demonstrate that the theory is self-consistent. No self-contradiction can be construed. That is in itself a very powerful thing.

Any traveller is always moving, in the sense that you are moving forward in time. If you just stay where you are then when your journey is plotted in a diagram your journey is plotted as a straight line. Another traveller separates from you, goes far away, makes a U-turn, and rejoins you. That journey, when plotted in a diagram, is not straight. Spatially it is a longer line.

Special Relativity asserts:
For the traveller who does not travel along the spatially shortest path less proper time elapses.

(Think of the word 'proper' in 'proper time' as related to 'property'. Your proper time is your own time. 'Proper time' is the standard expression in this context.)

To get to my overall point I need to discuss a number of things about acceleation. Bear with me (or jump ahead to paragraphs with words in bold)

Think of measuring your own acceleration and inferring your current position from that as a higher order form of dead reckoning.

When two spaceships depart from each other, and make a large journey, they can rejoin by both returning to the point where they were together, using the above described accelerational dead reckoning.

Special relativity asserts that if you measure your acceleration accurately, and you use that information to plot your motion (relative to some chosen origin) you can accurately predict how much proper time will have elapsed for you as compared to another traveller (whose journey is also known and plotted). (When you and the other traveller have rejoined you can proceed to compare elapsed proper time.)

It is this measurability that makes the difference.

For contrast: in the case of relative velocity there is no such thing as measuring that one is actually motionless and the other is moving. Well, if there is nothing measurable anyway then how about not admitting it in the theory altogether? As we know, that is what special relativity does: special relativity asserts that velocity is inherently relative.

The point is: this does not extend to acceleration.
Whether or not you are acccelerating is measurable. In special relativity acceleration is just as fundamental as in newtonian dynamics.

My best guess is that this is the key point:
What I always see is that novices automatically apply the following reasoning: if position is inherently relative, and velocity is inherently relative, then surely acceleration must be relative too.
That expectation is understandable, but it is totally not how special relativity works. In special relativity acceleration is just as fundamental as in newtonian dynamics.

The thing that special relativity does is that it gives exact mathematics that allows you to calculate how much difference in elapsed proper time there will be between two travellers who have travelled different journeys, accumulating a different amount of distance travelled.

I interpret your question as asking for a very broad picture of how this can happen, without worrying about the details. Therefore, here is the sort of thing that can happen (although if I were doing this accurately, it would have to include times like 4:33 or 7:14). 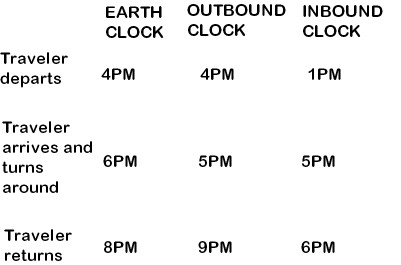 Now: As the inbound traveler arrives home, what do the twins say?

The returning inbound twin says: Actually, I left at 1 (with my clock reading 4) and reached Alpha Centauri four hours later at 5, but my clock (and my body) ran slow that whole time, so I only aged an hour. On the one-hour trip back, I aged another hour. I was gone for a total of five hours (from 1 to 6), but during that time you (and your clock) aged only four hours; the whole time, your clock was running slow.

(The outbound twin would tell yet a different story, in which the outbound trip takes one hour and the return trip takes four. But that story too is consistent with all the events, and with every clock except his own always running slowly.)

95
What is the proper way to explain the twin paradox?
0
Time dilatation - relative movement