Current through the reverse biased junction in transistor [closed]

It's surprisingly difficult to find a nice simple description of how a transistor works. This description is from my old physics book - I suspect this may be oversimplified and I'm sure a complete description would run to lots of equations!

Anyhow, this is what an NPN transistor looks like: 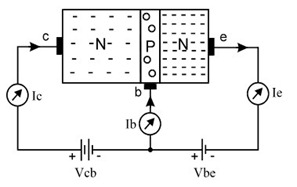 so as you say, the collector-base junction is reverse biased and no current flows.

A PNP transistor works the same way but in reverse.

From a first approximation, the depletion zone of a reverse-biased diode is simply an insulating region. But this doesn't explain the collector junction of a transistor. We need to look at this insulation-effect in more detail.

In truth, a depletion zone does not block the motion of any charge carriers found there. Instead, there's (usually) no significant carrier population there in the first place. A depletion zone is an insulator like an empty vacuum: a voltage placed across a vacuum will produce zero current, showing that a vacuum is insulating ...yet any charges injected from outside would easily flow.

But what if we dumped a bunch of electrons into the p-doped side of our diode? Sure, many would be swallowed up by the holes there. But some would pour into the depletion zone, where they'd be strongly forced across the junction and into the n-doped side. (The larger the reverse-bias voltage, the faster those charges would move.) So, dumping charges into the wrong side of a reversed diode will cause a large current.

And that's exactly what transistors do: in an NPN transistor, the Emitter region dumps large numbers of electrons into the p-doped Base. From the viewpoint of the CB junction, those electrons are on the wrong side of that diode. A few are swallowed by holes, but the majority wander through the Base region, and make it all the way over to the Collector's depletion zone. If they touch it, it grabs them and accelerates them with the full Vcb voltage-field, flinging them into the collector region. (Their large K.E. causes the Collector to heat up.)

So, heh, a BJT is much like a vacuum tube triode, where the Collector region is like a positively-charged metal plate, and the depletion zone of the Collector junction is like a vacuum with a large voltage placed across. And even worse[*], with NPN transistors, if we force the initially-positive Vbe to become more and more negative, it turns off the electron flow, just like a Grid electrode does.

[*] Worse for those who dislike the idea that BJT transistors are like FETs and vacuum-triodes: they behave as transconductance components, with output current controlled by a voltage signal.

Simply put, and speaking about a NPN. The base emitter junction is forward biased to allow current to be injected into the emitter. The transistor uses this small injected current and amplifies it in the current that flows from Collector to Emitter. The mechanisms for that are complicated and I won't cover it. But in essence if you also want the base collector junction to be forward biased then the amplified current would also flow into the base. You wouldn't have a transistor then as these currents need to be kept seperate.

The collector base junction is reverse biased so that it attracts majority charge carriers and this jonction offers a high resistance to the current(as in rev. PN junc diode)

Not the answer you're looking for? Browse other questions tagged semiconductor-physics electronics electrical-engineering or ask your own question.

4
How does current flow from the emitter, through the base and to the collector in a NPN transistor?

0
Explanation for transistor as amplifier
4
How does current flow from the emitter, through the base and to the collector in a NPN transistor?
6
How did the Bardeen-Brattain point-contact transistor work?
0
Reversed biased condition np junction
1
Question about full wave bridge rectifier
1
Conceptual question regarding transistor biasing
0
What factors affect drift current in a PN junction?