Suppose a mass is attached to a spring and is oscillating (SHM). If a driving force is applied, it must be at the same frequency as the mass' oscillation frequency. However I'm told that the phase difference between the driving frequency and the mass's frequency must be $\frac{\pi}{2}$.

It would depend on damping effects being taken into account or not.

Invoking Newton's 2nd Law of motion, a differential equation for the motion of a damped harmonic oscillator can be written (including an external, sinusoidal driving force term):

Where $m$ is the inertial mass of the system, $\omega_0$ is its characteristic frequency, $\xi$ a dimensionless damping factor... And, last but not least, where $F_0$ is the amplitude of the driving force and $\omega$ its frequency.

The stationary ($t\rightarrow\infty$) solution takes the shape $x\left(t\right)=A_0\sin\left(\omega t-\varphi_0\right)$, where $A_0$ is an amplitude factor (whose particular expression in terms of the particular parameters is not relevant to this question) and $\varphi_0$ is phase lag, which is this phase difference you are asking about.

This phase difference can be calculated to be $\varphi_0=\left|\arctan\left(\xi\dfrac{2\omega\omega_0}{\omega^2-\omega_0^2}\right)\right|$. It is a phase lag, so with the (implicitly) chosen phase convention, it has to be positive.

If there was no damping whatsoever in the system, $\xi$ would be zero, and you would be right: $\varphi_0=0$. The stationary motion of the oscillator would be in phase with the driving force (regardless of which is the relationship between $\omega$ and $\omega_0$).

But in an undamped resonant situation the amplitude $A_0$ diverges, which means that the stationary solution is never reached (starting from reasonable, finite initial conditions for the system). Also, in a physical down-to-earth situation, the system would eventually breakdown somewhere, somehow, since energy is being introduced into the system with perfect efficiency (that is what 'resonance' is all about) and without any means to dissipate it. Somewhere, sooner or later, something would go boom or crash. That is how nasty undamped resonances are.

On the other hand, for a non-zero damping, in the resonant case $\omega=\omega_0$, the argument of the $\arctan$ function diverges, so the phase difference turns out in this case to be $\frac{\pi}{2}$.

To sum up, the $\frac{\pi}{2}$ phase appears as an effect of damping in the system, and just a little bit of it is enough to offset the oscillatory response from the system. As it happens, every realistic, down-to-earth harmonic system has some kind of damping in its dynamics. Even if the damping is so small that the induced dephasing in an out-of-resonance situation is negligible for every purpose that the model has, damping has to be taken into account in resonant and closely resonant motion, otherwise the model yields highly unphysical results.

The oscillator frequency $\omega$ says nothing about the actual oscillator phase. Let us suppose that your oscillator oscillates freely like this: $$x(t) = A_0\cdot\cos(\omega t + \phi_0),\; t<0.$$ At $t=0$ it has a phase $\phi_0$. Depending on its value the oscillator can be moving forward or backward with some velocity. If you switch your external force on at $t=0$ and onwards, say, to push your particle in a positive direction, then, depending on the particle phase, the force will accelerate or decelerate the particle.

The particle velocity phase is shifted with respect to the particle coordinate $$v(t) = -A \sin(\omega t + \phi_0)=A\cos(\omega t + \phi_0 +\pi/2),\; t<0.\;$$ So, when $\Phi_0 =\phi_0 +\pi/2\;$ the force is in phase with velocity (not with coordinate) - you have not only the same direction for the velocity and for the force, but also coincidence of instants when both the velocity and the force become zero (no time intervals with their opposite signs).

EDIT: The permanent phase shift of $\pi/2$ in a resonant case with friction (as described in user17581 answer) is a self-established thing and its meaning is simple - the external force in the end compensates exactly the friction force; the latter being proportional to velocity which is shifted by $\pi/2$ with respect to the coordinate time-dependence (so the oscillator oscillates as if it were free, without losses).

For resonance to occur (at $\gamma$=0 and $\omega=\omega_0$), the system must be able to absorb all the energy input coming from the external driving force, and this results in incessant growth in the amplitude. For this to happen, the external force, which does not have to be in sine/cosine form, should be positive (pushing forward) while the oscillator is traveling from $-A$ (amplitude) to $+A$, and the external force should be negative (pulling back) while the oscillator is traveling from $+A$ to $-A$.

The plot below shows the solution of $\ddot{x}(t)+\omega_0^2x(t)=f(\omega_0 t)$ where $f(\omega t)$ is a square-wave of which frequency $\omega$ here matches the natural frequency of the harmonic oscillator $\omega_0$. The amplitude grows in time due to the resonance ($\omega=\omega_0$) as expected. 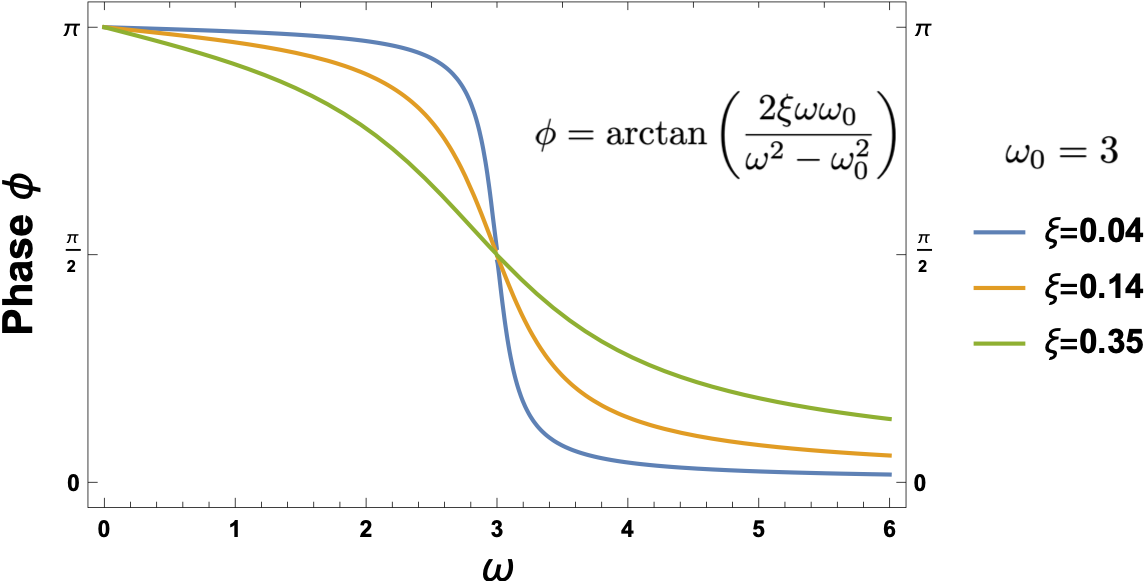 Want to see all of these in action? Here's a video from MIT: https://www.youtube.com/watch?v=aZNnwQ8HJHU

Hope all these help.

The reason becomes clear if you sketch the graphs of displacement against time and velocity against time. You'll notice that the displacement time graph is a cosine curve (assuming it starts at max amplitude) and the velocity graph is a sine curve, thus it has been shifted by pi/2 to the right. Therefore, at a phase difference of pi/2 the velocities are in phase which gives max kinetic energy: increasing the amplitude.

Not the answer you're looking for? Browse other questions tagged frequency resonance oscillators or ask your own question.

2
Phase shift of resonance
1
Meaning of “phase delay” in forced oscillations
5
How to determine phase angle for a sinusoidal motion?
2
What is a complex phase shift?
0
Is the displacement of a driving oscillator in phase with the driving force?