This is a common misconception, and to find the answer one only has to think what adjusting the aperture size in a camera does.

I will illustrate my answer using a lens as it is easier for me to draw the diagram. 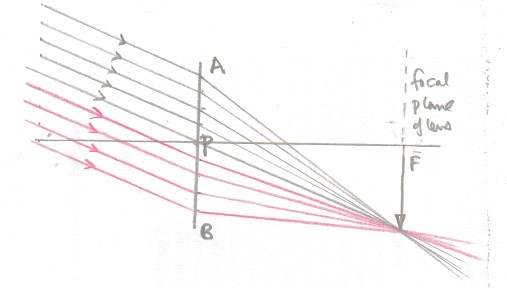 If the bottom part of the lens $PB$ is covered up, the image of the top of the distant object is still formed in the focal plane of the lens with the rays which pass through the top part $AP$ of the lens.
There is no part of the image which is "missing" – rather the image formed is less bright as less light is responsible for its formation.

And there is no "blind spot" as the image of the whole of the distant object can still be seen.

Not the answer you're looking for? Browse other questions tagged telescopes or ask your own question.

5
Why do we stop using optics for photons above a certain energy?
1
Does sign convention in geometric optics fail to explain the cases of image formation by virtual objects?
0
Question about reflecting telescope
0
How can one tell how much light is blocked by a secondary mirror in a reflecting telescope?
3
Is a mirror-less telescope possible?
0
Optical interferometer using software
1
How do telescopes work as magnifiers?
0
Is there a difference between the image captured by a big telescope and a small telescope at several points in spacetime?