Light of a minimum frequency (threshold frequency) must be shone on the cathode in order to eject electrons. The minimum frequency corresponds to a certain energy of each photon by $E=hf$ and this energy represents the work function $\phi$ of the metal (minimum amount of energy needed to eject an electron). This produces a graph like this 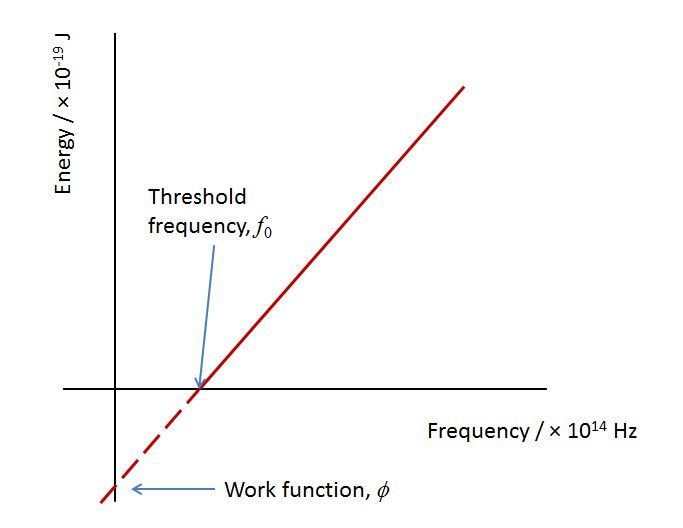 However, what if you turned up the voltage in the experiment (such that the plate the electrons are flying towards - the anode - is positive)? Wouldn't this decrease the work function of the metal because the electric field is pulling on the electrons and thus less energy will be needed to push them out of the metal? Could someone tell me if my reasoning is correct or if there is no impact?

Yes, an electric field will change the work function, but it is a very small change at ordinary values of the field. For example, if you apply say 10 volts to an electrode one centimetre away, giving a field of 1000 volts per metre, then the change in the work function will be negligible. I haven't got a number for you, but I expect the change would be lost in the noise in a photoelectric experiment.

The reason for this is that the work function is itself connected to an electric field, namely the one that comes about between the metal and an electron leaving it, and pulls the electron back in. This field is partly associated with the nearest atoms, and partly with the conductor as a whole. It can be overcome by applying a field of a similar size, and then the applied field will pull electrons out of the material, a process called electrical breakdown. This is what causes a spark when two conductors with a large voltage difference are brought near to one another. You need fields around a million volts per meter to cause such breakdown, I think.

It may surprise you that I wrote about such large fields, when the voltages in a typical photoelectric effect experiment are quite modest. It is because the workfunction voltage is developed over a small distance when an electron leaves a metal surface.

To conclude then, all this is almost entirely irrelevant to the photoelectric effect in the conditions that are normally used to study it, but in extreme conditions it is very relevant.

The Frank-Hertz experiment demonstrated the existence of excited states in mercury atoms helping to confirm the quantum theory which predicted that electrons occupied only discrete quantized energy states electrons were accelerated by a voltage toward a positively charged grid in a glass envelope filled with mercury vapor. Past the grid was a collection plate which held a small negative voltage with respect to the grid. The values of accelerating voltage where the current dropped gave a measure of the energy necessary to force an electron to an excited state.

Not the answer you're looking for? Browse other questions tagged photoelectric-effect or ask your own question.