Disclaimer 0) I'm a mathematician, not a physicist
1) I'm interested in the theory where there is only one scalar field and the only interaction term in the Lagrangian is a monomial of the form $\frac{g}{d!}\varphi^d$-in particular for $d=3$ (non physical but nevermind) or $d=4$-here $g$ is a coupling constant
2) As I understood Feynman diagrams is a device to compute some complicated (functional) integrals-in particular I'm less interested in the physical interpretation of the diagrams: I'm only interested in an analytical information they contain.

Let me also specify concretely Feynman rules (fixing notations and conventions at the same time): 1) Every external line produces a propagator $\frac{1}{p_i^2+m^2}$
2) Every internal line produces an expression $\frac{1}{k_i^2+m^2} \frac{d^Dk_i}{(2 \pi)^D}$
3) Every vertex (corresponding to the monomial $\frac{g}{d!}\varphi^d$ produces delta distribution $(2\pi)^D g \delta(\sum_{lines entering}k_i-\sum_{lines living}k_j)$ (here we allow also external lines).
At the end we integrate the product of the all above expressions

For a Feyman diagram $\Gamma$ one can define the loop number $L$ as $I-V+1$ where $V$ is a number of vertices, $I$ is a number of internal lines. One can also define the so called superficial degree of summability as $DL-2I$: if this degree is negative then the integral associated to a graph will be finite. There is some subtelty that the loop number is undefined for graphs which are not connected: however the formula $I-V+1$ still makes sense but now this formula does not coincide with the number of loops of geometric realization of the graph.

These notions can be translated into the analytic language: the loop number should be the number of free variables over which (after we get rid of delta ,,functions'') we integrate. The superficial degree of summability comes from power counting: we integrate over $DL$ dimensional space and the expression under the integral is a rational function with a $2I$ degree polynomial in the denominator. However when I tried to evaluate some examples I met different expressions: since drawing Feynman diagrams is problematic I refer to this picture: 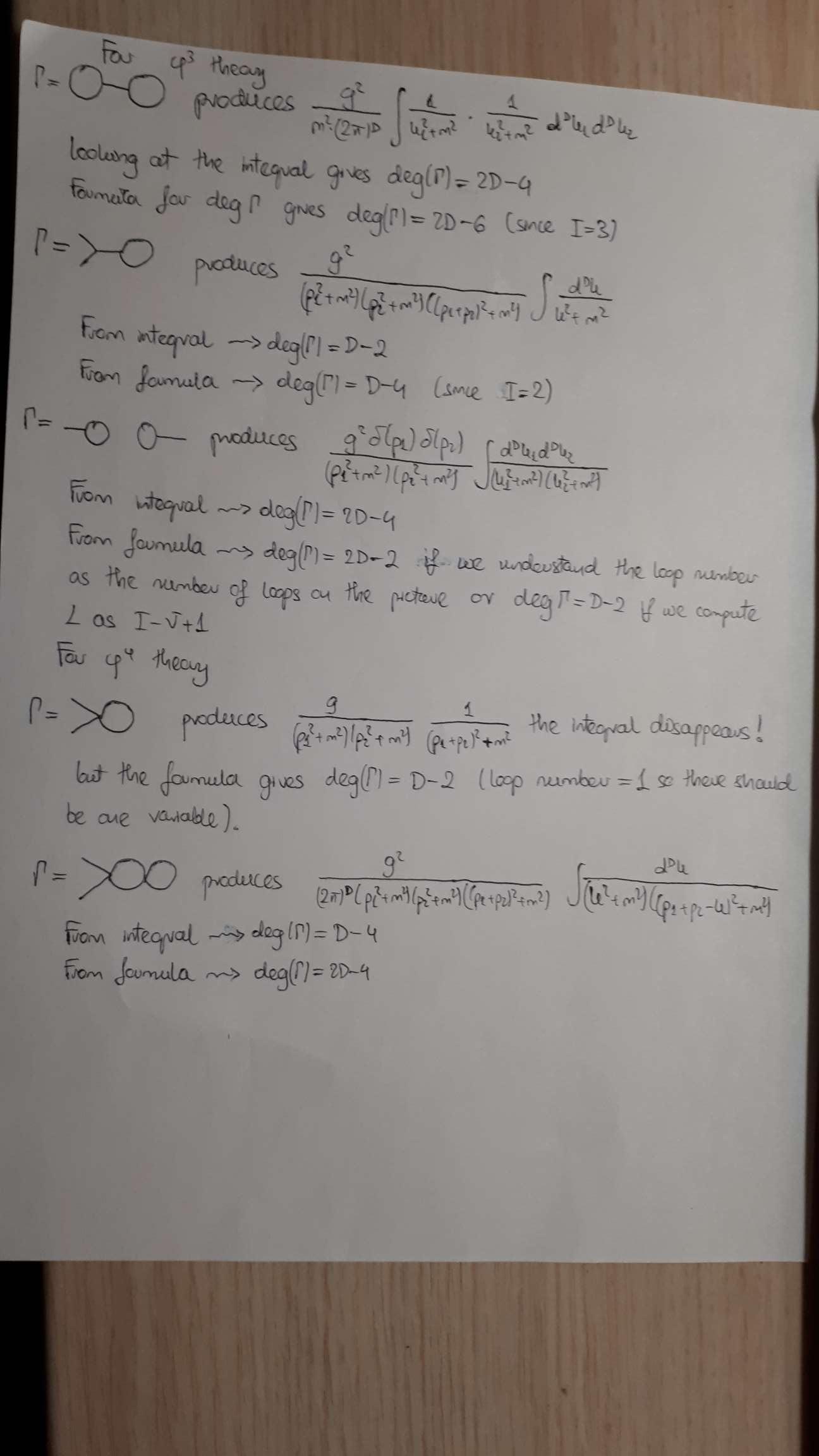 This picture contains several examples in which, by following Feynman rules I get expressions which look strange for me. I will be grateful if could somebody correct me and write the correct form of integrals corresponding to the Feynman graphs given in this image.

Not the answer you're looking for? Browse other questions tagged quantum-field-theory renormalization feynman-diagrams or ask your own question.