Rolling object not stopping even when friction is considered

I am dealing with a question that has me puzzled. Suppose an object which is rolling on a horizontal plane, with initial linear velocity $v=v_0$ and angular velocity $\Omega=\Omega_0$.

There is friction between the object and the floor, but we are not considering aerodynamic friction (i.e., no air). Intuition tells me that after a while the object will stop, i.e., it won't rotate nor move anymore. But that seems to be impossible!

$F_r$ would make the object stop moving in the horizontal direction.. but the induced torque would make $\Omega$ increase!

The second possibility is that $F_r$ points forwards. That would cause the object to stop rotating, but it would accelerate it in the horizontal direction.

So.. the only possible option left is that $F_r = 0$, and that the object will continue to move and rotate for ever. That seems really unintuitive to me. Is there something I'm missing?

Just to clarify, I'm not imposing any additional conditions on the problem, such as rolling without slipping.

In real life, the energy lost is due to the deformation (dimple) that happens as the object rolls. In front of the dimple, the object slows down as it compresses the floor. On the back of the dimple, the floor springs back pushing the object forwards, but that spring back is slightly less than the compression leading in a loss of energy. This energy is due to hysteresis in the materials.

Additionally, for any fraction of time that the object isn't in pure rolling (and thus slipping) friction causes energy loss. The power loss is easily calulated by $W_{\rm loss} = F_{\rm friction} \; v_{\rm slip}$.

At first, there will be a frictional force due to the relative slipping between the cylinder and floor

But after some time, due to the action of the frictional force, the cylinder will be in pure rolling i.e. v=Ωr

Once this is reached, there won't be any relative slipping between the surfaces and hence no friction

This happens as no body is rigid ideally i.e. it undergoes deformation while rolling

There is friction between the object and the floor, but we are not considering aerodynamic friction (i.e., no air). Intuition tells me that after a while the object will stop, i.e., it won't rotate nor move anymore. But that seems to be impossible!

Static and kinetic friction not withstanding, I believe the wheel will slow down simply because any real object is deformable. The section of the wheel in contact with the ground will undergo some deformation due to pressure. No deformation is completely elastic. When contact with the ground ends not all of the energy that caused deformation is recovered (it is dissipated as heat). We call this rolling friction or rolling drag. How long it takes to stop will depend on how rigid (resistant to deformation) the wheel is (the more rigid the longer it will take) and the degree to which the deformation is elastic (the more elastic the longer it will take).

The object rolling will slow down and eventually stop because if you imagine a magnified view of the forward edge of the object where it is touching the supporting surface, it has sank itself in a shallow trench into the material crushed under it, because nothing is rigid. And is continually working its way uphill to climb over the edge of the trench but loses some more energy in crushing a new segment in trench.

And as has been mentioned in other answers the object deforms and flattens a bit at the attack edge and expands at the release end, both compression and expansion are not elastic and lose energy by dissipating heat.

Another way of losing rolling energy is when this compression and expansion at the contact surface happens it creates a vibration in the object similar to heaving and deflating of breathing, however this vibration gets damped by internal friction between the molecules of the object. 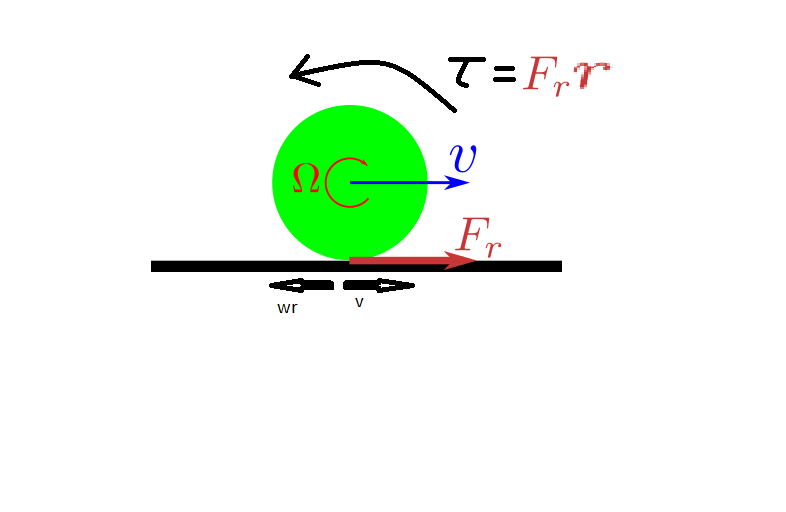 As we've assumed that at any given moment, there won't be any slipping between object and ground, $v$ velocity of object will always be equal to $\omega r$.

But in real life, $\omega r$ and $v$ will never be equal. If $v$ is greater than $\omega r$ then friction will act in opposite direction, will reduce $v$ and increase $\omega$, but the moment $\omega r$ is greater than $v$, friction will start acting in the direction of $v$, and now it'll decrease $\omega$ and increase $v$. This process will keep happening and eventually object will come to rest.

Friction is not conservative force. Whenever $v$ and $\omega r$ are not equal, kinetic friction will come into the picture and there will be some loss of energy. Because of this, lose in velocity and gain in $\omega r$ won't be equal and vice versa. Hence kinetic energy of system will keep reducing until it becomes zero or when there won't be any kinetic friction.

Not the answer you're looking for? Browse other questions tagged newtonian-mechanics classical-mechanics rigid-body-dynamics or ask your own question.