Why in a two possible energies system heat capacity goes to zero as the temperature goes to infinity? I thought as T increases heat capacity approached to a constant positive number, however I'm getting something like the figure 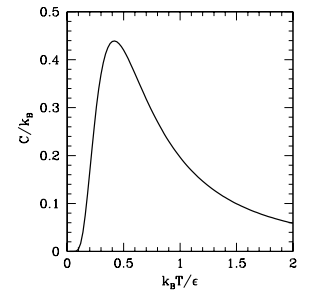 In the two-level system, at very high temperature one reaches the situation where the populations of the states no longer change when the temperature is raised, so no more uptake of energy is possible. The states become equally populated (all the Boltzmann factors $\propto\exp(-E_i/k_BT)$ are the same as $T\rightarrow\infty$). The energy vs temperature curve saturates at a constant value, and it follows that the heat capacity tends to zero at high temperature. Many other model systems which have an upper bound to the energies of the states, and either a finite number of discrete states or a continuum of states with a reasonably behaved density of states, should behave in the same way.

In many systems, on the other hand, there is no upper bound on the energy; there are always higher energy states which can be populated. So when one increases the temperature, there is always the possibility of the total energy of the system increasing. The ideal gas, and classical simple harmonic oscillator, are examples, as is the quantum harmonic oscillator, whose behaviour becomes classical-like at high temperatures. In many cases, such as these, it turns out that the average energy increases linearly with temperature (for example, the classical equipartition of energy result may apply), and so the heat capacity tends to a constant value, in this limit.