If absolute velocity does not exist, how can we say a rocket accelerates in empty space?

If a rocket in space fires its thrusters, it is propelled forwards as per the laws of motion. This can be measured by its position relative to other bodies in the universe.

Hypothetically if there was a universe that was completely empty except for the rocket and it then fired its thrusters, surely the same forces would apply (even if its movement could not be measured). Just because we can’t measure an event, is that the same thing as saying that it never happened? Is it correct to say that the rocket didn’t move?

Within the context of Newtonian mechanics, there's a simple answer: velocities are not absolute, but differences in velocities are. So you can state that acceleration occurs unambiguously.

In special relativity, this is a bit more complicated because of relativistic velocity addition, but all observers can unambiguously compute a "proper" acceleration for every object, which is the acceleration in that object's momentary rest frame.

In fact, the same logic still works in general relativity; acceleration is unambiguous even in a universe without matter. However, in certain philosophical stances inspired by general relativity, the question is trickier because one might take a hardline Machian position, where motion should only be defined in relation to other matter. But in this case you can still answer the question because there is motion relative to the exhaust.

A rocket's thrusters function by ejecting reaction mass (exhaust). You can measure the movement of the rocket by its distance from its reaction mass. The rocket moves relative to its reactant.

You can say the rocket didn't move, but not because it can't be measured. The center of mass of a rocket-reactant system* never goes anywhere—not even in our universe**—because the force of the rocket on its reactant is equal and opposite to the force of the reactant on the rocket. In this sense, the rocket-reactant system's center of mass is unaffected by the thrusters because the thrusters are internal to the system in question.

** Unless acted upon by an outside force.

how can we say a rocket accelerates in empty space ? 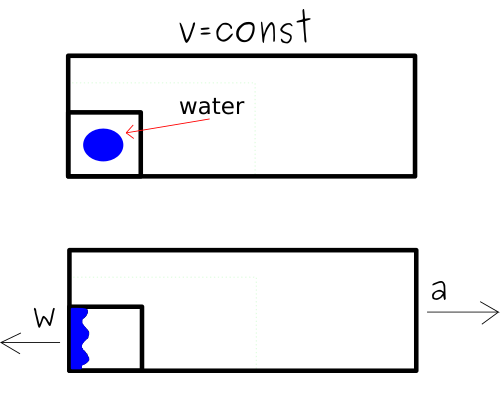 It's much like water "feels" centrifugal force. What you actually will not be able to distinguish is that if rocket flies with acceleration OR if it has already landed at some planet given that astronauts were sleeping in a journey and no windows to see planet surface and rocket's dashboard is broken showing false acceleration. It is a direct conclusion of Equivalence principle.

An absolute velocity can not be measured, that's correct. But an absolute acceleration can. E.g. with a simple scale.

Measuring the acceleration, you can know your velocity. This is a system that is e.g. already since long time used in airplanes known as inertial navigation system.

There is the other part, the relative velocity, as already mentioned in other answers: while the absolute velocity is not measurable, differences are. And in this case the difference to the exhaust of the rocket can be measured.

Relative velocities are the only ones that actually matter.

We can do the same in general relativity for some sets of initial conditions but not others, but there is no simple proof for this because conservation of momentum and conservation of energy are linked in general relativity. In all of the ones for which this works, the absolute velocity is equivalent to the velocity of the cosmic background radiation.

Rockets accelerate by pushing mass out the back. The weak forces resulting from CMB interaction are negligible for any reasonable rocket, therefore if fired in deep space, the reasonable reference frame is the initial frame of the rocket, and there is no change to position of the center of mass of rocket + exhaust. As we should expect from this, engine efficiency is exponential with engine exhaust velocity.

*Yes I know taking the limit of a constant makes no mathematical sense. What we're looking for is reintroducing Newton's assumption that the speed of light is too large to matter for anything else.

if it is a universe with the same dimensions and physical laws as our own, then the rocket would move per action and reaction, whether or not there was any other mass or energy in the universe. Then the rocket would be moving away from the gasses it expelled.

from whatever i have read this is a fundamental open q. properties of space and time are not known in an "empty" universe and hence concept of motion is not clearly understood. you might want to read about spinning water bucket thought experiment

I will firstly answer in the context of relativity. The proper acceleration, meaning the acceleration as measured in the reference frame of the rocket, which is related to the "force" felt by the rocket, is independent of its velocity (relative to any other observer). However the rocket's acceleration as measured in other reference frames does depend on the relative velocity: $\vec a' = \vec a/\gamma^3$, where $\gamma := (1-(v/c)^2)^{-1/2}$ is the Lorentz factor. Hence other frames measure a lower acceleration for the rocket. The "$\vec a$" terms are accelerations in space (3-accelerations) to be precise; also this simple formula applies only when the relative velocity lines up with the acceleration direction (again, I mean in space only). Tsamplaris 2010 is a nice reference, see $\S7.2$.

To take a very different perspective, from philosophy of physics and Newtonian gravity, you can actually define or interpret "acceleration" as relative if you really want to. (I mention this as a curiosity only, and if the reader is pragmatic or prefers a simple answer then ignore this and just say "acceleration is absolute".) John Norton, in a 1995 article subtitled "Acceleration is relative", writes

Presumably this could be extended to the rocket example here.

First of all, Leroy's question has nothing whatsoever to do with rockets. His question is about motion in space. Scientists have been pondering the issue of motion in space for at least five centuries. At the beginning of the twentieth century a consensus began to form in the scientific community that a law of nature exists mandating that inertial motion relative to space cannot be measured, and that absolute space does not exist. That consensus about absolute motion and absolute space is stronger today than ever before. Although it is generally accepted by the scientific community that if a rocket experiences a period of acceleration in space, the rocket's velocity in space will change accordingly, but the century old consensus requires that the rocket cannot have a velocity relative to space because there is no such entity like absolute space for the rocket's motion to be relative to. It takes considerable arm waving to wrap your mind around what seems like contradicting assertions.

Obviously there are inconsistencies in prevailing scientific thought about space and motion in space, and these inconsistencies are most likely what prompted Leroy to post his questions. The root cause of the inconsistencies is the century old consensus that absolute space does not exist. Ironically, the supporters of this consensus readily accept that the Lorentz Transformation correctly depicts space and time for inertial observers in empty space. What they don't realize is that the transformation contains a hidden trail-head of a logic path leading to mathematical proof that absolute space actually does exist.

For those of you interested in the mathematical proof of the above declarations check out my paper The Prime Reference which you can download from my website. Just click on the link in the lower right portion of my picture. When you get to my site click on The Nerds Room, and when you get there click on The Prime Reference. For those of you interested in the ramifications of this revelation check out my Dick & Jane book about relativity that is available on Amazon.

The instant your rocket begins to accelerate, the space it’s in is no longer “empty except for the rocket”. Because you now also have the rocket’s reaction mass, and that gives you something else against which its movement can be measured.

You got "movement" and "acceleration" mixed up.

"Movement" (in free-fall), i.e. velocity, cannot be measured without outside references. Movement is always in relation to something else.

But acceleration, i.e. the changing of velocity, can readily be measured without outside references.

So you can't tell whether a rocket is moving or not if you have no reference, but you can very easily measure if it is accelerating, by how much, and in which direction.

Without an Ether, there can be no absolute velocity.

That's the gist of it. It's for this reason that Einstein stated, "space without ether is unthinkable".

Unfortunately, he was voted down by his peers as this went against everything he said in his theory of spacial relativity. Einstein realized his mistake, but by then, his theory had taken on a life of its own.

OH yeah, back to the question. Tie a Lazer pointer to a light fitting, pointing straight down. Mark the spot. If the dot moves, you're accelerating in the opposite direction.

Not the answer you're looking for? Browse other questions tagged spacetime reference-frames velocity relative-motion or ask your own question.

19
Twins Paradox: Why is one frame considered to be the accelerating frame
12
Is acceleration an absolute quantity?