What is the rate at which a precessing top falls over?

From the following equation from hyperphysics, as rotational speed $\omega$ decreases, precession speed $\omega_p$ increases. However, from what we observe physically, as rotational speed of the top decreases, not only does precession speed increase, we also see that $\phi$ increases. I believe this discrepancy is due to the equation assuming zero friction slowing down the spin.

How would one modify / derive the equation to take into account friction slowing the spin leading to an increase in $\phi$? 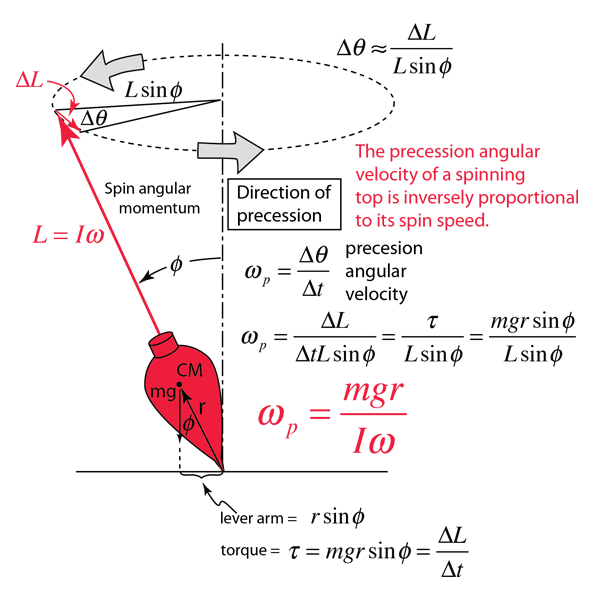 As you point out:
In the case of a spinning top that is in the process of decaying three things are happening hand in hand.

As you suspect:
the equations presented on the Hyperphysics website are approximations, they are not exhaustive. I'll get back to that further on in this answer.

A larger precessing speed has a corresponding larger rotational kinetic energy. The height loss of the center of mass of the spinning top is the source of that energy. That is: gravitational potential energy gets converted to kinetic energy.

This conversion process is discussed in the Feynman Lectures, Book I, chapter 20, Rotation in space. In section 20-3 Feynman discusses the onset of the precessing motion, right after the gyroscope has been released. The onset of precessing motion is summerized as: "So you see it has to go down a little, in order to go around."

This discussion by Feynman has been experimentally verified with a tabletop experiment. This was done by Svilen Kostov and Daniel Hammer. The article which they describe their corroboration of Feynman's discussion is named after that key assertion It has to go down a little, in order to go around.

The actual mechanism of the conversion of pitching motion to precessing motion is discussed by me in an 2012 answer here on physics.stackexchange, to a question titled "What determines the direction of precession of a gyroscope?"

To find the rate at which the spinning top's center of mass loses height:
It should be possible to use either energy considerations or angular momentum considerations. I expect the energy approach to be the shortest.

You would need to find an expression for the rotational kinetic energy of the precessing motion. To reach the required precessing speed the center of mass needs to drop a corresponding height.

An exhaustive derivation of gyroscopic precession uses Euler angles throughout.

It may well be that nobody has ever worked out that problem. In engineering gyroscopes are always equipped with some driving mechanism (usually an electric motor) to sustain a constant spin rate.

Not the answer you're looking for? Browse other questions tagged newtonian-mechanics rotational-dynamics gyroscopes precession or ask your own question.

29
Why don't spinning tops fall over?
12
What makes a wrist-energized gyroscope rotate faster?
1
Torque and angular acceleration with bicycle wheel
0
Understanding work with rotational momentum/moment of inertia
3
Why do the expressions for an object rolling down an incline not depend on the coefficient of static friction?
0
A query on the solution of a gyroscope with friction