Do SR account for one sixth or one third of the anomalous perihelion shift?

In answers to two other questions on this site:

it is stated that special relativity could account for one sixth of the "anomalous perihelion shift" of Mercury and other planets.

If I insert the "relativistic mass" (I know people hate that term) on both sides of Newtons equation for gravitational acceleration you first have:

and you end up with:

This will give you more or less precisely one third of the experimentally found anomalous perihelion shift. (I checked this out by numerical integration, I do not have an analytical solution)

I guess it can be argued whether adding a "relativistic mass" in the form used in special relativity to the expression for gravitational acceleration by Newton constitutes "special relativity" or not.

Still using this method you get one third of the anomalous perihelion shift and not one sixth.

1. Do SR account for one third or one sixth of the so called anomalous "perihelion shift"?

2. Can you say that one third of the weak field perihelion shift is explained by using the "Lorentz factor" in this way and two thirds are due to effects accounted for in general relativity but not in special relativity?

In the strong field limit you get orbits using the expression above that are obviously wrong, but still in the ballpark. The green circle represents the Schwarzschild radius and the red circle the innermost stable circular orbit. In this special case one gets three revolutions between consecutive aphelions. 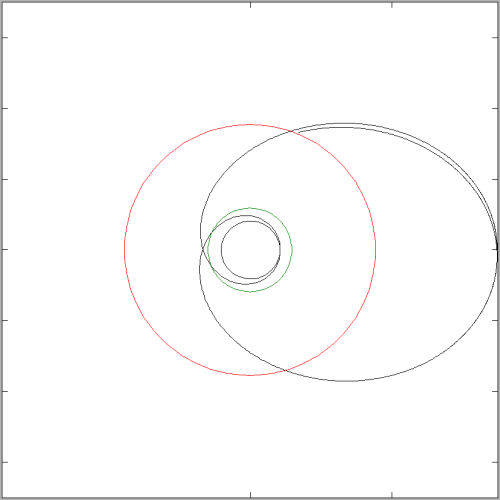 According to both current answers by Elio Fabri and Pulsar assuming:

results in one sixth of the experimentally found perihelion shift and is the most SR way to do it based on arguments that you can get (4) but probably not (2) from a Lagrangian approach and that (4) but not (2) is consistent with a "conservative force". It could perhaps be argued that (3) violates the equivalence principle as you have "$m\gamma$" on the left side of the equation but only "$m$" on the right side. Note that using (4) we no longer have $v=\sqrt{GM/r}$ for circular orbits as is true in both classical mechanics and general relativity (in Schwarzschild coordinates using coordinate time at least) and using (2). Instead, for circular orbits, we end up with:

It is a bit strange if you get the correct orbital velocity in both GR and classically but not in SR, if we assume (4) is the correct SR expression.

I plotted an example of a strong field orbit using (4) below. The extra factor of $1/\gamma$ appearing in (4) but not in (2) weakens the gravitational acceleration at high velocities and thus gives less perihelion shift. The kinds of orbits one gets using (4) instead of (2) looks less like what is expected from GR. 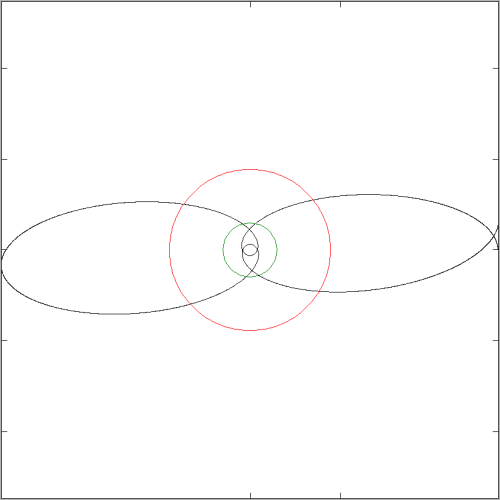 With these caveats in mind, we can try to formulate some sort of SR version of Newton's laws. Your initial equation is almost correct, but if we want to keep the property that the gravitational force is conservative, the equation should have the form $$ \frac{\text{d}(m\gamma\vec{v})}{\text{d}t} = - \frac{GMm}{r^2}{\vec{e}_r}.\tag{1} $$ (again, SR is not able to describe gravity, but this is the best we can do). This way, the force can be written as the gradient of a gravitational potential $\vec{F} = -\vec\nabla V(r)$. A force that only depends on position and not on velocity also satisfies Newton's Third Law and conservation of momentum: keep in mind that the Sun feels an equal and opposite force from Mercury, but contrary to Mercury the velocity of the Sun is nearly zero. So if we want to keep the Newtonian form of gravity (i.e. no curvature of spacetime), the gravitational force can only depend on the distance between Mercury and the Sun.

Suppose we started instead with $$ \frac{\text{d}(m\gamma\vec{v})}{\text{d}t} = - \frac{GMm\gamma}{r^2}{\vec{e}_r}. $$ It's easy to verify that the energy of this system is $$ E = m\gamma c^2\exp\left(-\frac{GM}{c^2r}\right) = \sqrt{m^2c^4 + \vec{p}^2c^2}\exp\left(-\frac{GM}{c^2r}\right), $$ which looks weird; it doesn't resemble either the Newtonian or the GR form. It does reduce to Newtonian physics for weak gravitational fields and low velocities, but this is not what Goldstein in the original questions had in mind. Ultimately though, it's a discussion about definitions, since there is no correct SR version of gravity.

As to the first problem, it's a special case of a matter discussed in almost all books on classical mechanics, e.g. Goldstein or Landau.

If $A_0=-k/r$ ($k>0$) the equation for trajectory can be solved in close terms and gives a "rotating" ellipse (1/6 the GR result). You find detailed calculations in your first link.

We only have to discuss to what physical situations the above treatment applies. There are no approximations and the only condition is that "potential" is the time component of a 4-vector. This ends discussion of item 1.

2) I don't remember how Sommerfeld approached the problem of relativistic Hydrogen atom, but I'd bet he closely followed the general treatment examined above. In Hydrogen atom the only interaction is between electron and proton. Given the high mass ratio (about 1 to 2000) the problem can be safely reduced to that of an electron moving in an electrostatic field of magnitude $e/r^2$. Potential energy is then $-e^2/r^2$.

It's well known that electrostatic potential is the time component of a 4-vector, so we are precisely in the domain where the above treatment can be applied with no further approximation. The rotating ellipse has a consequence: whereas angular momentum is still conserved, this is no longer true for Lenz vector. In QM terms, $l$-degeneracy of levels is broken. This is a satisfying feature, but the resulting "fine structure" doesn't agree with experimental results. We had to wait for Dirac's theory to obtain a good agreement with experiment.

3) IMO there's no hope to get the GR result for precession in SR. The main reason is that spacetime in GR is curved and only part of the effects due to curvature can be reproduced in SR. This is dramatically shown in your figure. There is a trajectory merrily entering and exiting the horizon - a thing perfectly understandable since in SR there is no horizon: spacetime is flat.

A comment about your introduction of a $\g$ in force expression. The issue isn't a more or less "hated" relativistic mass. Actually there could be some argument in favour of your $\g$, as in GR what causes spacetime curvature is not plainly mass, but the energy-momentum tensor. Then we could think that the way a body feels an existing curvature may depend on its energy, not on rest mass.

Some time ago I made a calculation (unpublished) aimed at seeing if acceleration of a falling body, as measured in a local rest frame in Schw. geometry depends on $m$ or on $m\g$. I tested two cases:

In both cases I found that the measured acceleration if interpreted within SR should be viewed as due to a force proportional to $m\g$.

Should that result be taken as a proof that your $\g$ factor is right? I'd not say so, as the context is entirely different. You're assuming SR and building a gravitational theory where a force exists, acting on the test body, depending on $m\g$. You take that expression as holding in the whole flat spacetime of SR.

My approach was different. I assumed GR and Schw. spacetime. I computed geodesics in that spacetime and asked myself how the corresponding motion of a test body would look if measured in a small neighborhood of a fixed point. Measured, I mean, with rulers and clocks for that neighborhood. Then I searched how a physicist in that neighborhood would interpret the observed motion if he used SR, included the modified second law: which force did cause the observed motion? I already gave the answer I found.

Your confusion came from introducing the so called “relativistic mass”, which seems to give you the wrong result. The mass $m$ is invariant in all contexts and doesn’t transform as $m→mγ$. However, (4) is the best definition of momentum and can be considered valid even in classical physics as γ→1.

Not the answer you're looking for? Browse other questions tagged general-relativity special-relativity gravity orbital-motion celestial-mechanics or ask your own question.

31
How do you calculate the anomalous precession of Mercury?
4
Is the best data about Mercury's perihelion shift really 60 years old?
0
Newton's gravity formulas for ellipses
6
Do 2-body elliptic orbits precess in special relativity?
0
Can the constant $k$ from Kepler's third law be independent of the mass of the planet?
1
Formula for perihelion speed as a function of circular speed and eccentricity
1
3PN and higher order post-Newtonian Schwarzschild approximation
1
Is there a general relativistic mass in general relativity?
0
Time dilation between perihelion and aphelion of earth with the combined effects of Special Relativity and General Relativity