How to calculate fractal dimension by fitting on a log-log plot?

I have simulated a DLA pattern by MC method and the data is for fractal dimension. The right column is the number of particle N(r) into radius r and the left column is the radius r. I plotted a log-log plot by Origin software. But I have a problem with fitting onto the plot. I do not know which part of the data should be considered and others should be deleted to fit on the log-log plot accurately and show me a correct fractal dimension. Please guide me to do it. In fact, I should consider a scaling region for calculating the slope (fractal dimension) but I do not know how I do it.

The result is below: 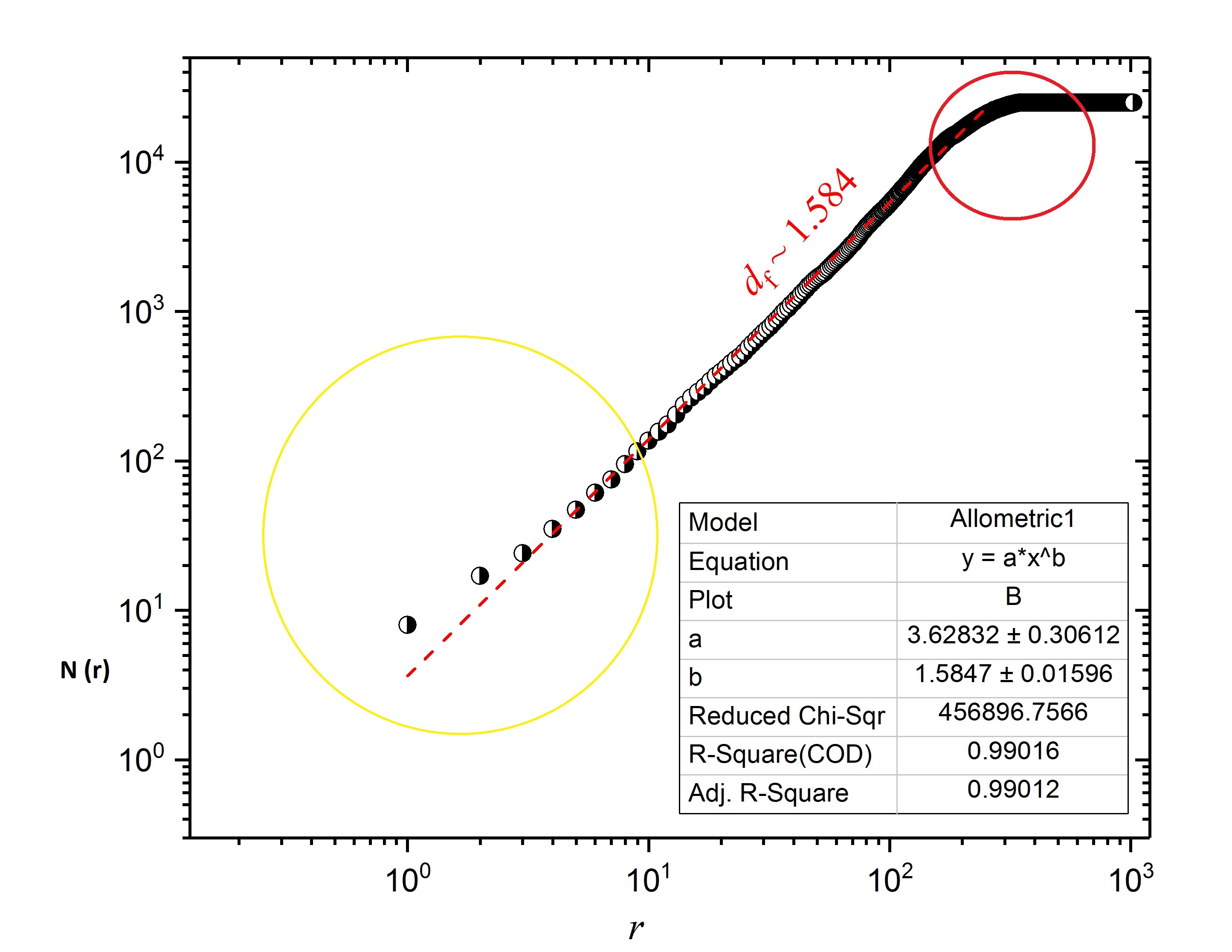 Two circles show two regions which should be considered accurately.

My data is shown below:

The value you plotted onto the fit is the one you are interested in.

Note that you are computing a quantity different from the box-dimension, which is the quantity generally used for these estimates.

The box dimension is defined as:

$$ d_B=lim_{\epsilon\rightarrow0}\frac{log\;N(\epsilon)}{log\;(\frac{1}{\epsilon})} $$ While you are using the quantity: $d=\frac{log\;N(R)}{log\;R}$. If you substitute $\epsilon$ with $R^{-1}$ in the definition of box dimension then, in the limit of $R\rightarrow\infty$ you obtain the same value, so that you can interchange the two estimates whenever $R$ is large enough, say so large that only a negligible set of your particles are distant less than $R^{-1}$.

This said, let's come to the plot.

On the rightmost part, is obvious that you are considering values of $R$ for which you are encircling almost all of your particles, so you should discard your data.

On the leftmost side, on the other hand, you have a sort of offset in your dimension which is most likely due to making your estimate on a local cluster of particles. At this stage this part of the data is not to be considered either.

In order to understand which data to discard on the left side you should:

This last step will give you some error bars to put on the data and probably will also reduce the offset you are seeing on the left side of your graph. Be careful to implement this averaging without including (almost empty) balls on the edge of your distribution, because these would ruin your estimate.

Edit: looking at the numbers I realize that probably most of your data are not in the range that makes your quantity equivalent to the box dimension. However I would say that the quantity you are considering may have a dignity of its own as scaling dimension. I don't know how much this can be similar to other estimates of fractal dimension, like the box dimension or the Haussdorff dimension.

You could make a separate fit for the region in which $R$ is so large that (almost) all the particles are at distances larger than $R^{-1}$ and see the difference between the results.