I'm working on a problem involving deriving equations of rotational motion for a system of connected rods (see the picture), and I'm a bit confused about a few things to do with rotational motion. I won't go into detail about the forces involved or their precise nature - it's more something I don't understand about rotational motion. I know how to derive local and global momentum balances by taking forces acting on each point, applying Newton's second law and also considering the motion of the centre of mass of the whole system, but I am getting incredibly confused with doing the same for the rotational motion. 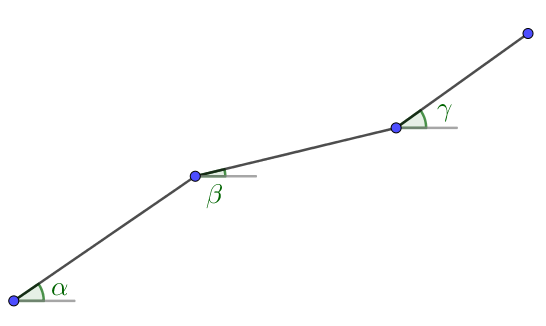 If the moments of inertia about each of the first three blue dots are $I_1$, $I_2$, $I_3$, would we have the following (using conservation of angular momentum, i.e. equivalent to Newton's Second Law for rotational motion):

Also, how would we write down the equation for the overall moment balance? One of my supervisors suggested that the global moment balance can be obtained by considering

since $\alpha$ could be describing the orientation of the whole body as the rods are connected, but I'm not so sure about this. Surely it doesn't make sense for the LHS of the above to equal two different things?

Also, a few of questions:

What you need to do is a bunch of free body diagrams to establish a relationship for each pin force as a function of the next body pin force and motion of the targeted body.

Consider the force/moment balance of body (1) as it receives the equal and opposite pin forces from body (2).