If atoms are mostly vacuum, why are things so rigid around us? [duplicate]

I can't say confidently that an atom is mostly vacuum, but I am somewhat sure of it because electrons and nucleons cover little space, and everything other than these elementary particles in an atom is vacuum.

Why is everything around us rigid even if the atom is mostly vacuum?

The question over which this question is marked duplicate has a completely different premise as compared to this question as this question asks about rigidity of materials around us rather than interaction between things around us and their subsequent behavior that they do not pass through each other.

I think the other answers which mention electrostatics capture the physics behind things being rigid correctly. However, I wanted to specifically point to your question of "why are they rigid when they're mostly vacuum?" I'd like to draw your attention to Guyed Masts: 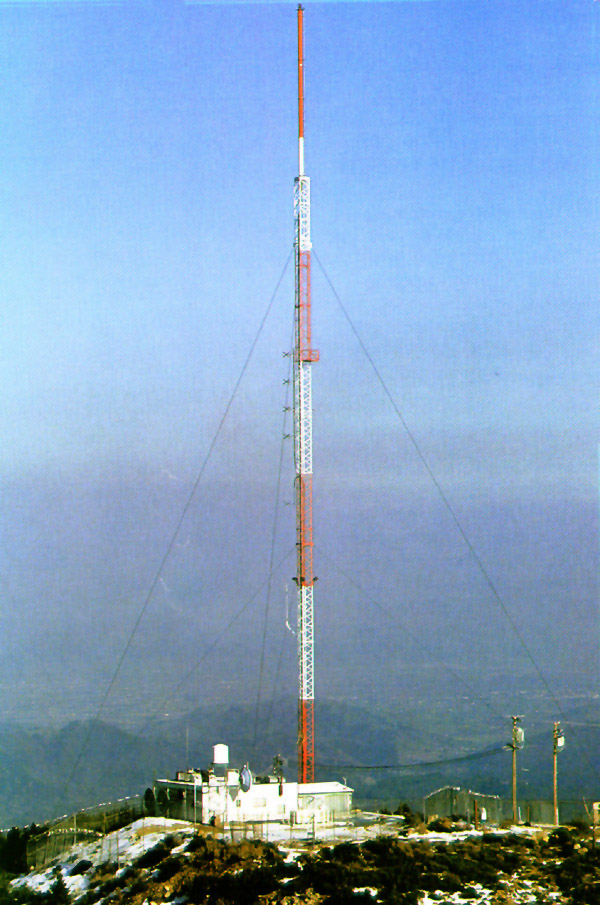 A Guyed mast is a tower whose rigidity depends on several guy-wires surrounding it. If you're treating the mast in the picture above as a rigid structure, you have to include the guy wires too. If you didn't include them, the tower would flex and collapse. And if you look at the whole structure, almost all of it is empty air between the wires.

This points to why things are rigid. If the electrostatic forces between atoms are configured into a stable configuration, like how the mast with guy-wires is stable, then it can be rigid even though most of it is empty space. It's the structure which makes things rigid or not.

Objects feel solid because what is macroscopically perceived as contact between two objects is really electrostatic repulsion between the electrons of the materials. These fields have ranges that are significantly larger than the diameter of an atom. Thus, even though most of space is empty, these 'long-range' forces act as potential barriers that appear to us as solid material.

"Vacuum" is just an abstraction. If you think of an atom as being vacuum except for the electrons, protons and neutrons which are little balls that are not vacuum, that is incorrect. The structural pattern repeats itself within these particles: there is more such vacuum inside of them.

If two electrons separated by a distance repel each other, how can we regard the space between them as empty: isn't it filled with something, namely the electric field?

The macroscopic phenomenon of rigidity is just the interaction of force fields according to equations.

Objects on your computer screen can appear rigid. For instance, if you can't drag an object outside of an application's window, the edge of the window appears to be an impenetrable barrier. That is just the result of rules being applied; the space being visualized is entirely imaginary.

The rigidity of matter is due to a combination of two effects: electrostatic repulsion and Pauli repulsion. Pauli repulsion is the reason why only two electrons, with opposite spin, can occupy the same orbital. Thus electrons in atoms occupy shells and do not all reside in a common 1s orbital, which would drastically reduce atomic volume. Also it prevents two atoms from overlapping in space. It is hard to imagine a world without Pauli repulsion.

Solid objects are rigid because of the electrostatic repulsion of electrons in nearby atoms.

What is "rigidity"? On the macroscopic scale, we might liken it to a spring's spring constant or more generally Hooke's law describing a relationship between, stress, strain and an object's Young's Modulus.

Objects are rigid if a stress, i.e. force or pressure, induces only small distortions to the relative position of constituent particles.

In the absence of stress, an object will exist in several possible matter states: solid, liquid, gas, and plasma. We only have rigidity in the case of solids, though the concept applies to some extent to the others at high pressures.

All these interactions lead to an equilibrium position for the particles involved.

In an equilibrium state, particles can be described using the solutions to a Quantum Harmonic Oscillators about their equilibrium point. This implies a spring constant resistance, Hooke's Law.

So objects are rigid, unlike say, liquids or solids, when the wave function of their constituent particles can be described using wave functions of the Harmonic Oscillator. This in turn results from the kinetic energies of the particles not offsetting the attractive electro static bonds.

So we should get a measure of rigidity by averaging the binding energies of the closest particles to a point of interaction, doubling it then dividing by the mean square distance of those interacting particles.

The field isn't independent of the temperature, so $<u>=f(T)$. This might serve as a way of gauging a melting point.

Things appear rigid because of the way electrons interact

If you understand the interactions between things you can understand why atoms consisting mostly of empty space don't collapse into something smaller.

This is more complicated than simply saying that it is all about electrostatic repulsion. And you can't avoid quantum stuff in the answer.

The first part of the answer needs to ask why individual atoms take up so much more space than their naked components would if they were considered alone. Simple models of atoms (like the original "planetary" model that has electrons "orbiting" the nucleus because of electrostatic forces) don't do a good job of explaining this. A better, but incomplete, picture of what is really going on envisages electrons as standing waves. The picture of a standing wave has the benefit of capturing the basic quantisation of the possible shapes of electron "orbits" around a nucleus. Only certain shapes are possible (think of the possible vibrations in a violin string of a fixed length, though the electrons are moving in three dimensions not the two of a string).

Electrons don't collapse into the nucleus because there is is a simplest possible standing wave which has a definite shape. The rules for electrons only allow two electrons to occupy this simplest shaped orbital and only if they have opposite spins. Add more electrons and they have to behave in more complex ways (like the higher-order harmonics on a vibrating string). These have increasingly complex shapes. Those shapes define the size and geometry of an atom and the fact that the smaller possible standing wave is much larger than the size of a nucleus explains why atoms are mostly empty space.

The second part involves thinking about what happens when atoms interact. When atoms interact those electrons are what interact. And the results of those interactions get complicated quickly, which is why there is a whole scientific disciple called chemistry as well as one called physics. But the important point is that the standing election waves around molecules are more complex than the ones around naked single atoms, but they have definite shapes: the standing waves of electrons define the 3D shape and size of molecules.

When those molecules interact with other molecules those shapes and sizes matter. Lots of different types of interaction are possible: some mildly attractive, some strongly repulsive. When you touch a normal tabletop the molecules of your hand are strongly repulsed by the molecules of the table; if you live with toddlers, they may be attracted to the surface molecules of the table. But the root cause of the size is the standing waves of electron orbitals whose shape is determined by those quantum constraints on possible ways electrons can fit around nuclei.

There are various models that explain what forces are felt when molecules interact. But they all involve subtle changes in the shapes of the electron clouds around the molecules. But this is usually more complex that just "electrostatic repulsion" as the clouds have definite shapes (ultimately explained by the possible standing waves in atoms) and different distributions of electron density (the positive charges of the nuclei are not always exactly balanced by the average electron distribution generating some electrical dipoles, for example). And some electron clouds are "floppier" than others making it easier for quantum fluctuations to generate temporary attractions or repulsions (sometimes called London forces by chemists).

But the important point is that, when solids touch, the things that are interacting are electron clouds in different molecules. These have shape, size and other properties ultimately determined by the quantum rules constraining the possible "standing waves" that can be occupied by electrons. The details of those waves determines whether something is a solid or liquid and whether it is sticky or rigid.

Not the answer you're looking for? Browse other questions tagged quantum-mechanics electromagnetism atomic-physics vacuum pauli-exclusion-principle or ask your own question.

193
Why doesn't matter pass through other matter if atoms are 99.999% empty space?
132
What does it mean for two objects to "touch"?
112
How can I stand on the ground? EM or/and Pauli?
18
What are quarks made of?
7
If atoms are mostly empty space, why doesn't light pass through everything?
2
Protons and Electrons Occupying the Same Space

15
What could magnetic monopoles do that electrically charged particles can't?
2
Why do electrons couple in atoms?
6
Particles, fluctuations and the quantum vacuum: is this right?
1
Where is the line between Quantum and Relativity?