How long for a frictionless top to fall over?

So suppose a top with mass concentrated in a spherical body M of radius S with center situated a distance R to a point a horizontal table at an angle $\theta$ while rotating at angular speed $\omega$. How long does it take for the top to fall over?

Some simplifying assumptions: (1) Assume the point of the top is fixed on the table. (2) Assume that the time at which the top falls over is when $\theta = 0$. 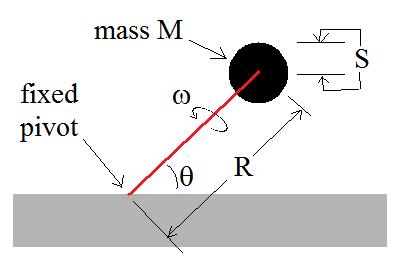 Well if you are really interested in Gyroscopes what about the equations of motion to get us started? Here I have copied some from http://www.gyroscopes.org/math2.asp which are in Euler-like coordinates:

and primes denote differentiation wrt time. We are assuming that s is constant - this is because there is no friction.

The expression for $SM_z$ simplifies because of the symmetry in the moments of inertia which in our case with the sphere on a rod R are:

Note that all of these equations are written in terms of the nutation angle q. In these coordinates q=0 when it is upright and $q=90^0$ when it is fallen over (although this is an approximation since it falls over at $q=90-\arctan(r/R)$).

The intuition behind your question is that when there is no spin s=0, there is no precession p=0. In this case the "fall" corresponds to a nutation from a small angle $q_0$ down to $q=90^0$ - and this nutation is the only motion. As s>0 these equations will generate a non-zero precession p>0, also the nutation will now reach a maximum $q_{max}$. The requirement is that s is sufficiently large that $q_0-q_{max}<90^0$. If this condition is not met then the top will still hit the surface after some rotation (precession angle f in these coordinates).

If one wished to take this further analytically then we could approximate for small initial angle $q_0$. So $\sin q_0=q_0$ and $\cos q_0=1$. Then we consider the x axis terms for the external torque.

Comments suggest that the motion described by the equations is not directly in accord with intuition. This is likely to be because a real Gyroscope has some elements of Friction. This friction has the effect of a damping term in the above equations. The friction will be basically a function of s, but n=n(s) through the equations, and the only acceleration term here is n'. Thus the friction, for a realistic Gyroscope, will damp the Nutation oscillations that otherwise occur. This would make the nutation an approximate constant of motion.

Treating nutation as a constant, simplifies the equations by setting n'=n=0 and so q, cos q and sin q become constants. However from an intuition perspective it reduces the number of (Euler) degrees of freedom from 3 to 2. So in a real Gyroscope we might see only the two degrees of freedom: spin and precession. Trying to intuit from this the behaviour in the remaining nutation dimension could be misleading as it ordinarily does not display behaviour in that dimension.

A related physical system which does display nutation is the "spinning plate on a pole" scenario. As the spin of the plates reduces through friction they start to wobble. If a wobble is too great the plate will fall over, even although it is still spinning a little.

Given a nonzero moment of inertia $I$, the transverse extension of the top from the rod has to be at least $\sqrt{I/M}$ because we can't have negative mass distributions. Because of this finite transverse extension, a spin-orbit cross coupling between the orbital angular momentum $L$ and the spin $S$ will have to exist. But this by itself isn't sufficient to transfer spin into orbital angular momentum.

The crucial question to ask is, is the distribution of mass of the rod rotationally symmetric about the rod axis? If yes, the kinetic and gravitational potential energy doesn't depend upon the orientation angle $\alpha$ of the top about the rod axis. However, if there are slight rotational asymmetries, we will have an $\alpha$ dependence leading to wobbles. These wobbles transfer spin into orbital angular momentum, and if sufficient angular momentum is transfered, the top will topple.

I think, once launched, the top will never fall over. Such are kinematic restrictions in this problem. For example, $\theta = const$ if it exceeds the minimum angle necessary for the top to be detached from the table. Of course, I imply that the initial conditions on the angular momentum are such that $\theta > \theta_{min}$.

Not the answer you're looking for? Browse other questions tagged classical-mechanics angular-momentum rotational-dynamics or ask your own question.

29
Why don't spinning tops fall over?
4
Will a precessing spinning wheel fall down if there is no friction at all?
1
Why does an increase in height decrease the spin time of a spinning top?

5
Why can you assume that the angular momentum vector of a top will always track its axis of rotation?
13
How do you explain spinning tops to a nine year old?
1
Finding the Mass of a Precessing Top
1
How to relate spin speed and time in which a gyroscope falls beyond some angle?
0
What actually is the vector of angular momentum?
16
Why should a motorcyclist hit the brakes to make his motorcycle tilt in midair?