How do superconducting materials float in magnetic field?

The movie Avatar got me interested in the subject, but so far I only found sophisticated articles loaded with unfamiliar words. Is there a simple way to explain how magnetic field affects superconducting materials in a way that causes them to float?

Superconductors float not just because of the Meinssner Effect. They Float because of quantum locking. Very small weak points in a thin superconductor allow magnetic fields to penetrate, locking them in. These are called Flux Tubes. 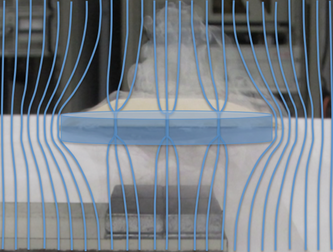 The Meissner Effect is only if you make a conductor into a superconductor while the magnet (or magnetic field) is near it. Placing a magnet near an existing superconductor is an example of electomagnetic induction producing magnetic levitation.

A magnetic field cannot penetrate a superconductor; since there's no resistance to the flow of electrons, a current is immediately created in the superconductor by the field, and the field produced by that current opposes the original field. This is ordinary magnetic induction, but with zero losses because of the superconductivity.

Essentially, whenever a magnet is brought near a superconductor, the superconductor immediately becomes an opposing magnet, producing the force that keeps the two objects apart. The magnitude of this force depends on the strength of the original magnet.

There is also a releated phenomenon known as the Meissner Effect, which describes how a magnetic field is actively excluded from a substance as it makes the transition to the superconducting state.

Another related phenomenon is flux pinning, which occurs in thin layers of type-II superconductors. When this occurs, magnetic field "lines" are trapped by the superconductor, passing through non-superconducting tubes that are isolated from the superconducting regions by vortices of current. This creates the effect that the superconductor "prefers" to be in the same magnitude of field that existed when it was created, actively resisting movement to a region of higher or lower field strength.

Flux pinning can also be created on a macro scale by forming a superconductor (any type) into a ring (torus) shape.

Not the answer you're looking for? Browse other questions tagged electromagnetism superconductivity levitation or ask your own question.

2
A correct explanation for the levitation of a superconductor above a magnet
0
Magnets quantum locking/levitating
0
will the magenet become weightless when made float on super conductor?