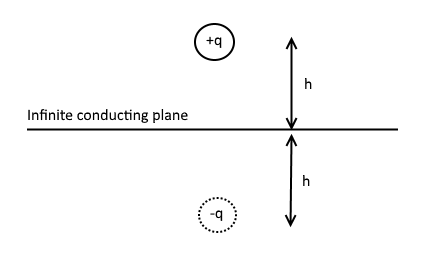 If the infinite conducting plane in the diagram above is grounded, then $V=0$ on the plane and the image problem is easy to solve - just put the dotted $-q$ charge there and the $V=0$ equipotential between the two charges satisfies the grounded plane boundary condition.

However, what if the infinite conducting plane is not grounded and so $V$ is not necessarily $0$?

Duffin, in Electricity and Magnetism 4th Edition, simply sets the conducting plane (which, as a conductor, must be an equipotential) to be the point of 0 potential. He then points out how the equipotential between the $+q$ charge and the image $-q$ charge is valued at $V=0$, so the boundary condition is satisfied. However, he set the plane as the potential reference point first when considering the initial configuration of plane and $+q$ charge and then used infinity as the reference point when he added the mirror $-q$ charge, so I don't see how his argument holds up.

How can we argue that the above image set up, with the dotted $-q$ charge, is valid even if the the potential on the conducting surface is not $0$?

Remember that absolute values of the electrical potential have no physical significance. Only potential differences have a physical meaning. Mathematically, you should note that this method is derived from Poisson's equation, and adding any constant value to the potential (i.e., shifting its reference value) will not change the equation, because the derivative will cancel it.

Not the answer you're looking for? Browse other questions tagged electromagnetism electrostatics potential method-of-images or ask your own question.