How to show that the electrons responsible for a current have an energy within $k_BT$ of the Fermi energy?

It is commonly written in textbooks that in metals the electrons responsible for an electric current are the ones that have an energy about $E_F$ and a few $k_BT$ around that energy. See for example Datta's textbook "Electronic transport in mesoscopic systems" page 37 (book available as PDF from a Google search):

It is easy to see why the current flows entirely within a few $k_BT$ of the quasi-Fermi energy.

But then, no proof nor anything involving $k_BT$ is shown anymore. What's more, it is then showed that the number of electrons involved in electrical conduction is proportional to the applied electric field's magnitude, which makes entirely sense to me. More precisely, he shows that the difference in energy between the most energetic electrons that create a current and the least energetic ones that also carry a current is worth $2eEL_m$ where $L_m$ is the mean free path, which is worth about $10$ nm. In other words, the width of energy around $E_F$ that electrons that create the current have, has nothing to do with $k_BT$.

I can understand that regarding the calculations for the specific heat, it is indeed true that only electrons having an energy about $k_BT$ around the Fermi energy (of the order of $1$ eV for metals) can absorb thermal energy, which is itself of the order of $k_BT$ (so about $10^{-5}eV$ to $10^{-3}eV$). It is easy to realize when one uses the fact that electrons are fermions and that at room temperature a metal is similar to a cold Fermi gas. Thus the electrons are roughly forming a sphere (let's take alkali metals to make things simple) in k-space and all states below the surface are occupied. The surface of the sphere is blurred due to finite temperature, in an energy amount around $k_BT$. So that the electrons that are below the surface by more than $k_BT$ cannot absorb thermal energy because the states above them are all occupied. It is only in that $k_BT$ window-range that electrons can absorb thermal energy.

But when I apply the same logic to an electric current, i.e. we apply an electric field to the metal instead of a temperature, I do not get anything related to $k_BT$ anymore. By considering that we apply $1$ V on a $1$ cm sample, the electric's field magnitude is about $100$ V/m which translate as an energy of about $10^{-6}$ eV. In other words, the electric field is a very tiny perturbation to the system, it is about 40 times smaller than rising the temperature of a metal by 1 K. I would expect then that only electrons having an energy around the Fermi energy $E_F$ with a margin equal to that extremely small $10^{-6}$ eV amount would be able to react to the field and produce a current. This has absolutely nothing to do with $k_BT$ and is in fact proportional to $|\vec E|$, as it intuitively (to me at least) should. I.e. I get something linear in the strength of the perturbation, just like with the case of the thermal energy with its thermal perturbation.

So, I do not see, for the life of me, how to reach to the conclusion that only electrons that have an energy within $k_BT$ of $E_F$ are able to produce a current.

I am well aware of the Fermi-Dirac distribution and how its derivative with respect to energy is non zero only around $E_F$, also of the density of states and how temperature affects it, etc. But I fail to see how it is relevant to answer my question.

Ashcroft and Mermin discuss this in their Chapter 13, the Semiclassical Theory of Conduction in Metals. Following a volume of electrons as they move through phase space, their ends up being a factor of the derivative of the Fermi function with energy which is non-zero only within a few kT of the Fermi energy.

I had checked that chapter, and seen that the conductivity can be written as an integral with a term that contains $\partial f/\partial \varepsilon$ which involves $k_BT$ (as I wrote in the previous paragraph), but I fail to see how this implies that the electrons responsible for the current at the ones that are within $k_BT$ of $E_F$. But that is indeed probably the way to go. But still, I would have to see where I go wrong in my reasoning that I exposed above.

I finally figured out. The statement that only electrons within a few $k_BT$ around $E_F$ contributes to a current when an electric field is applied to a metal is not universally true. This roughly holds when $k_BT >> e|\vec E|L_m$ where $L_m$ is the mean free path. For a reasonable current, the statement holds for almost all temperatures, i.e. above $1$ K.

The reason can be understood by considering 2 cases.

First case: T= absolute zero. At that temperature, the Fermi surface is perfectly sharp and if the statement would be true, then only the electrons exactly at the Fermi surface would contribute to a current, but this is wrong as can be seen from the countless displaced Fermi sphere pictures found in textbooks (and showed here in the answer by Pieter). Even at $0$ K, as Datta mathematically shows, the electrons that have an energy above $E_F - e|\vec E|L_m$ all do contribute to the current. In that case the energy window around $E_F$ is indeed of width $2e|\vec E|L_m$. In Pieter's figure of the Fermi sphere, only the crescent between the displaced and non displaced spheres contributes to the current. The maximum energy of these electrons is proportional to the applied $\vec E$ field strength ($v_d$ is proportional to it).

Second case: Finite temperature. In that case before applying the electric field, the Fermi surface isn't sharp, it is blurred. This means that there unoccupied states below $E_F$ and occupied states above $E_F$, all within a few $k_BT$ (because of the Pauli exclusion principle, as you've already pointed out). Nevertheless, it is very important to realize that there are unoccupied states within a few $k_BT$ around $E_F$. So that when another perturbation, such as an electric field, is applied, then all these electrons around $E_F$ by a few $k_BT$ can interact with the $\vec E$ field and get their energy increased (because they have unoccupied states above them). Here it is assumed that the electric field is a smaller perturbation than $k_BT$. For if the electric's field magnitude was gigantic, then even electrons with a much lower energy than $E_F-k_BT$ would be able to interact with the field and contribute to the current. You can picture this in the usual Fermi sphere figure as a huge displacement compared to the radius of the sphere, rather than a very tiny displacement (for ordinary current the real "displacement" is so tiny that it wouldn't be distinguishable to the naked eye on these figures).

In the free-electron model, I prefer to say that all valence electrons contribute to the current. This gives the correct value of the drift velocity as measured by the Hall effect. It also makes it clear that the drift velocity does not depend on temperature.

The image to visualize this is the displacement of the Fermi sphere by the drift velocity in velocity-space: 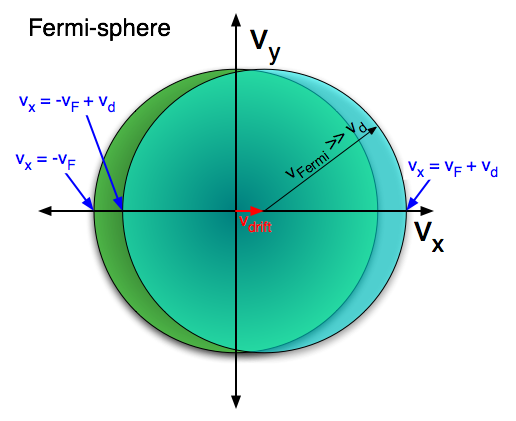 The statement that only states within $kT$ of the Fermi level contribute to the current may lead students to conclude that resistivity of metals should go up at low temperature. I am not arguing that the statement is wrong, but I cannot find it very helpful to explain the phenomena. It needs so much more explanation than to say that the number of conduction electrons is constant.

Let's perturb the metal in one of two ways.

The most important concern we have to determine conductivity is not any of these steps by themselves. It is the combination of how many electrons are free to carry current (due to promotion by the field and temperature) and how fast they are moving. In short, to determine the electrical conductivity of a metal, we must determine the number density of free electrons and the velocity of the free electrons under the applied electric field. In a metal, the number density of states depends on $\sqrt{E}$. At 0 K, we fill this with the appropriate number density of bonding electrons following Pauli exclusion principles. Then, we promote electrons using Fermi-Dirac statistics because electrons are fermions. This happens regardless of whether a field is applied or not. Using a convolution integral, we obtain a picture of electron density as a function of energy and temperature $\rho_E(E,T)$ as shown here. Those electrons above the Fermi energy are free to carry current.

Not the answer you're looking for? Browse other questions tagged condensed-matter solid-state-physics electric-current conductors metals or ask your own question.

0
Why electrons that form the cooper pairs only lie within $\omega_D$ of the Fermi energy in superconductors?