Can a syringe be used as a hanging scale if needed?

FYI: This is not a homework q; I am just curious... You can assume that... 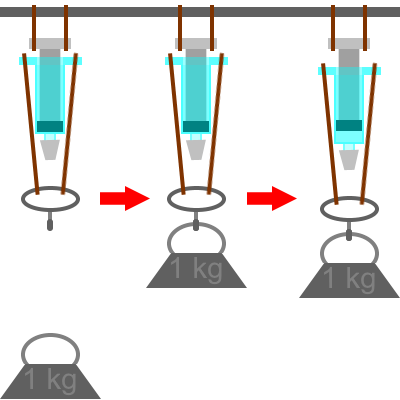 Is the following equation correct for determining the mass of the weight, based on how far it causes the plunger to depress...

Yes you are basically right, and I will add a historical note. When Robert Boyle (1627-1691) did his experiments which led to what we now call Boyle's law, he compared air to a spring and wrote of "the spring of the air", very much in the same spirit as you are doing here. He titled his book "New Experiments Physico-Mechanicall, Touching the Spring of the Air, and its Effects"; it was an important contribution to the development of experimental physics. His approach was along similar lines to yours---thinking through in precise mechanical terms the consequence of a change in volume of a given amount of air. There is one slight drawback in the use of an ordinary syringe, in that they normally have a lot of friction. The experiment would work better with a metal piston and cylinder, with o-rings and grease a bit like those used in a car engine.

Not the answer you're looking for? Browse other questions tagged newtonian-mechanics fluid-dynamics pressure atmospheric-science sensor or ask your own question.

72
What causes ballpoint pens to write intermittently?
2
Pressure loss in a syringe
8
Why does the air pressure at the surface of the earth exactly equal the weight of the entire air column above it
1
Atmospheric pressure on a flat object
1
Can dynamic viscosity be measured directly and without knowing fluid density?
1
Is Atmospheric Pressure due to weight of air or the collisions of the Molecules
1
Force to hold contents of a syringe in
2
Pressure of air in a cup