Does the internal state of a particle change after tunneling?

Consider a toy 1-dimensional model molecule: two particles with positions $x_1$ and $x_2$ and the same (for simplicity) masses, attracted to each other by a harmonic potential

Let this molecule come across a potential barrier, which has the same potential energy for both particles: $V(x_1)$ and $V(x_2)$ with maximum at $x_i=0$. Consider now the part of configuration space where both particles have tunneled through this barrier: $x_1,x_2>0$.

I'm interested in the steady states — the situation similar to the one where we have plane-waves/exponentials/plane-wave solution, but extended to a composite particle.

If there is sufficient energy for this to happen, then yes, it can. And, because of the totalitarian principle, it must happen, with some nonzero amplitude.

Basically, the way to think about this is in terms of channels. Each internal state of the particle defines a channel, with a continuum of kinetic energies, so that the total energy of the post-tunnelling state reads $$ E_{n,k} = E_n+E_k, $$ where $E_n$ is the energy of the $n$th internal state, and $E_k = \hbar^2 k^2/2m$ (say) is the kinetic energy corresponding to momentum $\hbar k$.

It's important to note, moreover, that these channels will be coherently populated, and that you will therefore observe coherent dynamics within the internal sector, depending on the COM coordinate. The cleanest way to express this is via the separable Schrödinger-equation solution $$ \Psi_\mathrm{transmitted}(x_1,x_2) = \sum_n C_n \exp\mathopen{}\left(i\sqrt{\frac{2m}{\hbar^2}(E_{k,\mathrm{in}} - \Delta E_n)}\frac{x_1+x_2}{\sqrt{2}}\right)\mathclose{} \psi_{\mathrm{int},n}\mathopen{}\left(\frac{x_1-x_2}{\sqrt{2}}\right)\mathclose{} , \tag{$*$} $$ which makes it clear that (because the COM energies are different), the relative phase between the different internal eigenstates will depend on the COM position $x_1+x_2$, so that the wavefunction will oscillate as you get away from the barriers.

The cleanest term for this process would be 'inelastic tunnelling', though it appears that the term is also used for configurations which are related but not identical (particularly this one), and those make it complicated to search for this process in the literature. Though that's mostly because the configuration you're interested in just isn't all that interesting (i.e. it doesn't justify a huge investment of research effort, unless you can make it do something useful).

Here is a sketch of the dynamics, which can be seen most clearly by plotting the total potential as a function of $x_1$ and $x_2$: 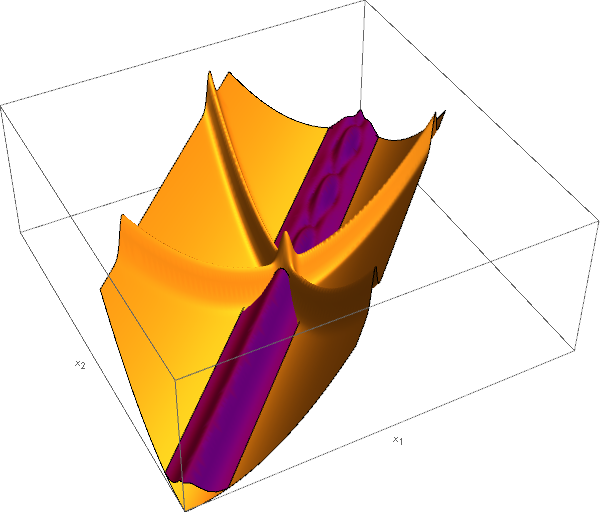 The potential part of the problem is completely straightforward $-$ you specified it in the question already. The state you seek, as you specified it in the questions and comments, is a scattering eigenstate: an eigenstate of the hamiltonian which contains population flowing in from the negative $x_1+x_2$ diagonal along the $x_1-x_2$ ground-state channel, completed to a full solution by adding the relevant tunnelled wavefunction (of the form $(*)$ above) as well as a reflected component, as well as whatever the wavefunction ends up looking like in the regions where the potential barrier is present.

(Note that this diagram omits the reflected wave along the ground-state channel, which would cause interference fringes with the incident wave. Moreover, if inelastic tunnelling is possible, then inelastic reflections are also made available, and those would cause transverse oscillations on the incident+reflected interference; this is also not pictured.)

Now, how do you actually calculate the amplitudes of all of these processes? well... with difficulty! Or, rather, using whatever suitable TISE-solving method causes you the least amount of pain, depending on what you know about the potential barrier and internal potential, what you consider a 'solution', and how kindly the gods are smiling on you. QM guarantees you the existence of amplitudes $C_n$ which will provide for a full eigenstate of the problem (when coupled with a similar reflected wave, and the wavefunction on the inner regions), but it doesn't lay out a roadmap of how to get them.

All of which is to say: yes, the process is possible, in coherent superposition with the usual inelastic tunnelling. But finding out the details can be a hard problem.

1
Does molecular diffraction depend on slit size?

13
Does tritium hydride exhibit measurable spontaneous fusion via proton tunneling?
2
Does quantum tunnelling drill holes in solid state drives?
0
Single particle tunneling Hamiltonian
0
Why can't the probability distribution of a quantum particle tunnelling be normalized?
1
Tunneling of Electrons
2
Quantum tunneling through the event horizon (EH): Is the EH a potential barrier for Quantum tunneling?
1
What is the real difference between tunneling ionization and multiphoton ionization (MPI)?
2
Bound states on a Quantum Dot and Tunneling on and off the Dot
0
Tunnelling of alpha particles - explanation