Why am I getting substantially different energy values when I include core electrons in this VASP calculation?

I am investigating the potential energy map of a periodic array of water molecules as a function of rotation. As part of that, I am attempting to determine the partial charges (to determine the dipole) using DDEC6 via Chargemol as a post-processing step (i.e. I already have converged WAVECAR files).

In order to implement this method, I need to include the core electrons and produce the relevant AECCAR* files by running VASP with the tags "NSW = 0; LAECHG=.TRUE." in my INCAR file according to numerous tutorials/discussions. In doing so, an energy relaxation is still performed, and I am getting different energy values (as show in the attached figure)

Is this suppose to happen? Should I get such drastic energy differences when including core elections? On the one hand, I can see how explicitly including the core elections in a wavefunction (i.e. WAVECAR file) that previously omitted them would require some relaxation, but then this also suggests that the use of pseudopotentials is not justified (an obvious contradiction). 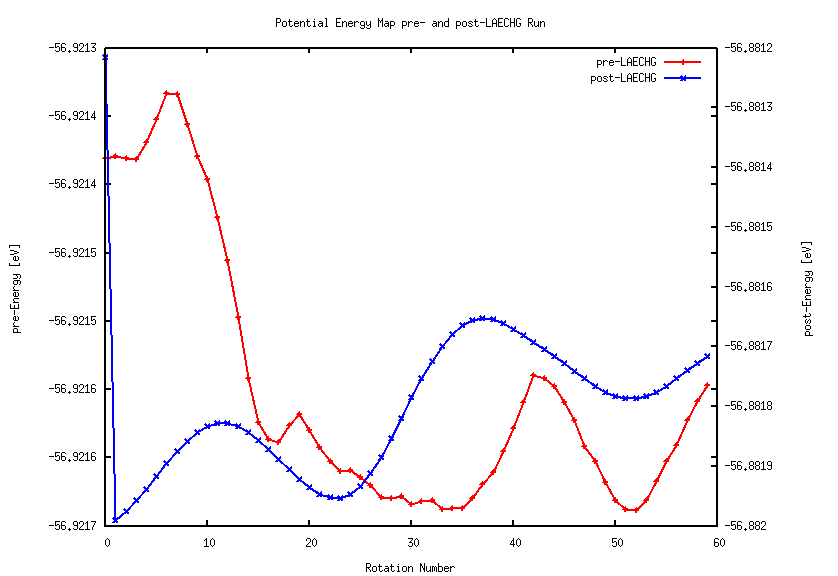 Though i never used Chargemol but you query is related to VASP run, i think, in my experience, if you do convergence ISIF=3, before doing NSW = 0; LAECHG=.TRUE., then these energies will change. Is this the situation in your case?

Not the answer you're looking for? Browse other questions tagged density-functional-theory or ask your own question.