Turning into superconductivity---continuous or discontinuous?

The figure below is Onnes' original data.

The transition region is very narrow. It suggests a first order phase transition, but still not so conclusive.

What is the latest understanding of the transition behavior? Is it continuous or discontinuous? What is the scale behavior? 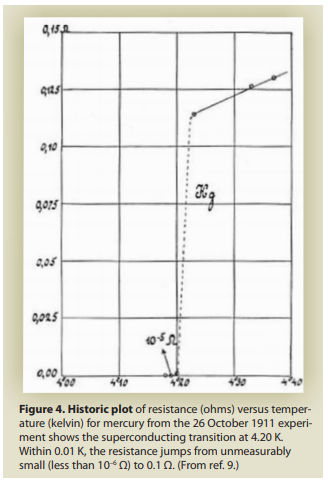 condensed-matter superconductivity
Share
Improve this question
asked May 28, 2019 at 13:17

The transition shown in Onnes picture is a second order phase transition (the data is for Hg). The order of the transition refers to the continuity of the derivatives of thermodynamical potentials not of every measurable quantity.

As a side note, the discontinuity in the resistivity is not a measurement of the order of the transition. Actually, the resistivity would be a very bad measurement for that. If you take a very disordered inhomogenous system, you still have may have a sharp transition if you get a quick percolation path between electrodes.