Earth moves how much under my feet when I jump?

If I'm standing at the equator, jump, and land 1 second later, the Earth does NOT move 1000mph (or .28 miles per second) relative to me, since my velocity while jumping is also 1000mph.

However, the Earth is moving in a circle (albeit a very large one), while I, while jumping, am moving in a straight line.

How much do I move relative to my starting point because of this? I realize it will be a miniscule amount, and not noticeable in practise, but I'd be interested in the theoretical answer.

First I will present the intuitive argument. The first thing to remember is that the earth rotates from west to east. Now let's say you are standing in london. You turn on your mods and jump very high. You will notice two things as you go very into orbit. First, your angular velocity about the earth's axis of rotation will have decreased because of conservation of angular momentum. Second, you will be moving south, because you are in orbit around the earth, and it would be weird if you stayed at the same latitude; you are supposed to be orbiting the center of the earth. So as you look down, you would see the earth spinning beneath your fit, and london would head east and you would be somewhere in the americas. Also you would be heading south, so you might land in central or south america. From this we can see that you will land southwest of where you started. (If you were in the southern hemisphere you would land to the northwest.)

Now let's try to estimate the magnitude of the effect. We will consider only the earth's gravity and rotation; we will not consider effects from other planets, moons or stars, since these should be weaker effects. We will also assume a spherical earth. I am not sure how much this assumption affects the answer.

Some quantities which will be important to this problem are: $\theta$, the latitude you are jumping from; $R_e$, the radius of the earth; $\rho_0 = R_e \cos \theta$, the your initial distance from the axis of rotation of the earth; $\omega = 2 \pi / \textrm{day}$, the angular velocity of the earth; $H$, how high you can jump; $m$, your mass; and $g$, gravitational acceleration.

There are three force acting on you when you are in the air. One force is gravity, and the other two are (fictitious) inertial forces. One is centrifugal force, and the other is the coriolis force.

Let's start by considering gravity. Gravity points down to the center of the earth, so the force of gravity is $\vec{F}_g=mg\zhat$.

Now let's calculate distances for the case where the height $H$ you jump is one meter, and the latitude is $45^ \circ$. In this case the centrifugal force will move you $6.91 \textrm{ mm}$ south and the coriolis force will move you $62.1 \textrm{ $\mu$m}$ west. In the spherical earth approximation, I think these values should be good to about 1%, the largest error being the uncertainty in the acceleration due to gravity.

While you jump, just like earth, you continue to move in a circle around sun. This is simply because you and earth are both continuing to undergo a gravitational acceleration towards sun.

However, while you jump, due to your and earth's difference in positions, earth and you will experience a miniscule difference in gravitational acceleration towards sun, resulting in so-called tidal forces.

The solar tidal acceleration at the Earth's surface along the Sun-Earth axis is about $0.52$ $10^{−6} m/s^2$. You would have to specify where on the equator you are jumping relative to the sun-earth axis, but as a rough estimate, the effect during a 1 second jump will not be larger than 0.5 micrometer. In reality, it will be much less, as a significant part of the effect would be in changing the height of your jump, not in changing your landing position. Also, you have to include tidal forces due to the moon (which are of the same order of magnitude), and effects due to the rotation of the earth around it's own axis. The tidal effects due to the Milky Way can safely be ignored.

Edit: The effect due to earth's rotation around it's own axis can be estimated as follows. At the equator, the circumference of the Earth is 40,000 kilometers, and the day is 86,400 seconds long, so the speed of earth's surface at the equator is roughly 460 m/s. When during the jump you spend your time on average roughly one meter above earth's surface, your velocity lags 460 m/s times 1/6.4x10^6 (the denominator corresponding to earth's radius in meters) which equates to about 70 micrometer per second. So, when jumping exactly vertically, after a second you land roughly 70 micrometer west of where you started.

EDIT: As suggested in the comments, I solved this problem after writing it symbolically. See https://physics.stackexchange.com/questions/227391 for details.

For small jumps, the answer is 122micrometers*s^3, where s is the time of the jump in seconds. I used numerical methods in Mathematica. Can someone improve on and/or verify this solution? 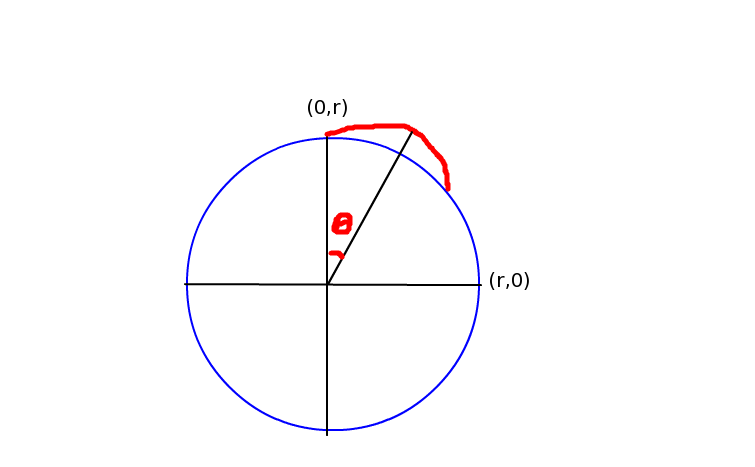 I then ran the following:

EDIT: ignoring the x component of gravity (treating x''[t] as 0) appears to introduce a significant amount of inaccuracy.

Ugh, assuming constant radial gravity $g$ I need to solve the equations of motion in polar coordinates $r$, $\theta$ as

which I do not know how to do. When I find out I will add to this answer. This system varies the direction of gravity and not it's magnitude for an approximate solution that should be fairly accurate.

which is Doh! nothing more than a projectile under constant gravity.

with time in the air:

These equations match the numerical solution 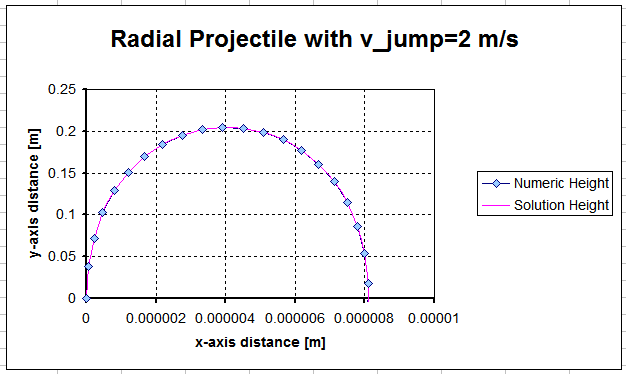 My excel sheet with both the numeric and the above solution is at Public Dropbox. Caution you need to have macros enabled as they are used for the numeric results.

In the rotating frame of the earth's surface, there are two fictitious forces acting on you, a centrifugal force and a Coriolis force. These are both quite small in absolute terms, and the centrifugal force is also not noticeable because it simply feels equivalent to a slight change in the over-all direction and magnitude of the gravitational field. The Coriolis force has a horizontal component and will therefore in theory cause you to come down in a slightly different place then the one from which you jumped up. In practice, this effect is much too small to observe in this situation due to all the other systematic and random errors.

There is identically zero effect due to the earth's motion around the sun, since the earth is free-falling and therefore constitutes an inertial frame in the general-relativistic sense.

Share
Improve this answer
answered Oct 8, 2013 at 23:33
user4552user4552
$\endgroup$
Add a comment  |
Highly active question. Earn 10 reputation (not counting the association bonus) in order to answer this question. The reputation requirement helps protect this question from spam and non-answer activity.

14
If I jump, would I be displaced from my initial position since the Earth is moving?
4
If a bullet is fired vertically upwards, when it comes back does it fall to the same spot?
1
If I jump will I land in the same spot?
1
What happens if a body jumps in the Moon?
1
Relation between Earth's rotation-gravity and moving object on Earth
0
Will a projectile fired straight up from the equator land at the same spot on the ground ignoring wind?
1
Whether a ball thrown upwards will come back to the same position if we consider the effect of rotation of the earth
0
Does Earth get gravity due to it's spinning?
1
Effect of Eath's rotation on a ball thrown upwards
0
Can we move without moving?
See more linked questions

16
How fast is Earth moving through the universe?
4
The Earth is spinning, so why don't we jump and land on a different location?
1
How can planes land on a rotating Earth?
0
What would happen if a ball flew through the open window of a car?
0
Does Piston moves faster when we accelerate the car?
0
When pulling a rope wound around an axle, how much force does the axle receive?