Why does a prism refract light into a rainbow? [duplicate]

As the other answer gives you the formula, and the reasoning, the real reason is that different wavelength photons diffract at different angles at the edge of two different medium.

Now the question remains, why do different wavelength photons change angle differently at the edge of a new medium?

First of all, lets clarify that the change in angle not only happens at the edge of a medium, but:

So, shooting back the question as a boomerang, why do photons travel parallel in white light (inside a single medium, with no density and lattice structure changes):

Now you see that the answer to your question, why do the photons change angle in different amounts still remains, and the answer is the lattice structure. To be more precise, in air, or water, there is no lattice (like a solid), but the structure of the molecules, and densities, can still be different. Still, water can act as a prism in air, and you get the same rainbow effect. Why? Because the edge of the water and air has a different molecular structure. Now the question is why do different wavelength photons bend differently at the edge of different structural media?

So shooting back the question again as a boomerang, why does a group of certain (same) wavelength photons bend parallel (the same way) at the edge of a new medium? Why does the wavelength decide the angle? First of all, there is no two photons with the same exact wavelength, as the wavelength is continuous. But, with our eyes, we cannot tell the difference at a certain level, so let's say there are two photons that seem to have the same wavelength (for our viewing purposes). Why do these photons bend at the same angle at the edge? Why do you see a static image of the colors at the prism, and why doesn't the absolute angles of the different color photons randomly change? And why doesn't the relative angle randomly change?

The answer could be classical or QM:

Let me elaborate on the QM answer. When a photon interacts with an atom, three things can happen:

Now with elastic scattering, as the photons in the white light, combined of all the different wavelengths from the Sun traveling parallel reach the edge of the glass prism from the air, what happens is:

Now this is not the complete reality. Imagine the double slit experiment. The photon (shot one at a time) will have its partial waves pass through both slits and interfere with each other, sometimes constructively and sometime destructively. The destructive interference will not be visible (just its void, missing dot), creating a dark area. The constructive interference will create a visible bright area.

So the answer to your question why different angles for different wavelength is that the elastic scattering as an interaction between the photons and the lattice atoms will create an angle that is:

It is all about probabilities at the QM level, but if you use a lot of photons, that build up the white light, most of the similar wavelengths will change angle in the same amount, and they will be visibly separated from the other wavelengths.

This phenomenon is due to the simple concept of refraction. Due to the difference in the wavelengths of each component of white light, this dispersion of white light occurs in denser/viscous media.

We also know that $v = f*y$, where f is the frequency of light and y is the wavelength. Hence, the angle of deviation depends on wavelength.

This is also the reason for the "spreading out" of light by a raindrop thus leading to the formation of rainbow. 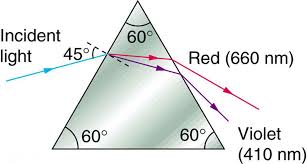 In the image given above, the red and violet components of white light have different wavelengths and hence the angle of refraction differs significantly in the viscous media.

Not the answer you're looking for? Browse other questions tagged optics visible-light scattering refraction geometric-optics or ask your own question.

48
Why do prisms work (why is refraction frequency dependent)?

10
Why does change in speed of a wave make it refract?
2
light ray undergoing total internal reflection thrice inside a prism
0
Why does a white photon create different energy photons in the prism
32
Why aren't rainbows blurred-out into nothing after they are produced?
1
How does a non-infinite monochromatic plane ray of light know which way to refract?
3
Why does a prism spread its “output” out over space, not time?
2
Why does light bend at an angle when it passes through a prism?