How do I calculate Reynold's number for a non-newtonian fluid?

I am familiar with the known formula to find Reynold's number in a circular pipe for newtonian fluids:

where $\rho$ is the density, $\bar{v}$ is the average velocity, and $\mu$ is the viscosity of the newtonian fluid; and $D$ is the inner diameter of the pipe.

At first, I presumed finding the $\text{Re}$ value for a non-Newtonian fluid is pretty straightforward: replace $\mu$ with whatever is equivalent for a non-newtonian fluid. I know that newtonian fluids hold the property that the viscous shear stress on any infinitesimal surface $dS$ is proportional to the velocity gradient along the normal of $dS$:

where $\tau$ is the viscous shear stress. Of course, the proportionality constant here is $\mu$.

For non-newtonian fluids, the shear stress is not proportional to velocity gradient, but still remains a function of it:

Various types of non-Newtonian fluids have been experimentally discovered, such as pseudoplastics and dilatants, with their shear-stress and shear rate (velocity gradient) relations: 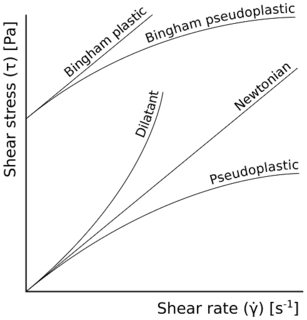 I thought we must use the "viscosity-equivalent" for non-Newtonian fluids:

This "viscosity equivalent" becomes a function of shear rate. This is where I hit a roadblock:

I am no expert on non Newtonian fluids, but to me it looks like (unless you have a special type of viscosity) you can't. A non Newtonian fluid is more complicated than a Newtonian one and can not be described by a single dimensionless parameter. I will illustrate this with a specific example of 'shear stress'-'velocity gradient' relation (I guess the 'dilatant' fluid):

There are however two numbers. The fluid is approximatively Newtonian if $Re \ll Re_{nN}$, and it is far from being Newtonian when $Re \gg Re_{nN}$. I guess that you need $Re \gg 1$ and $Re_{nN} \gg 1$ if you want to reach a turbulent regime and that the flow will be laminar if either $Re \ll 1$ or $Re_{nN} \ll 1$, but we are now entering into the specifics of non Newtonian fluids of which I know nothing. The takeaway message is (unfortunately) that non Newtonian fluids are complicated and depend on more than one parameter.

If the flow is laminar, then there is no problem, because you don't need to know the Reynolds number. You just integrate the velocity profile for the desired viscosity parameterization. This is particularly easy for a power-law fluid. To check for the onset of turbulence, you can use the viscosity evaluated at the wall shear rate to get the Reynolds number.

For turbulent flow, I suggest researching with Google. However, here is a reference to get you started for the case of a power law fluid:

I just briefly looked with Google, and found lots of references covering methodology for turbulent flow.

We need to define effective viscosity of the fluid for a given a set of fluid flow conditions to determine Reynolds numbers of a non-Newtonian fluid. Please refer to the paper below for more information.

Not the answer you're looking for? Browse other questions tagged fluid-dynamics dimensional-analysis flow turbulence non-newtonian-fluids or ask your own question.

4
What's the shear rate in a turbulent flow?
2
what is the static pressure in a yield stress fluid?
1
Derivation of the energy-momentum tensor for an imperfect fluid
0
Viscous forces with asymmetric gradient velocity in fluid mechanics
2
Why does viscosity effect the normal component of stress in a Newtonian fluid?
1
How to calculate Shear Rate magnitude for Compressible Flow?
0
How does fluid viscosity determine viscous friction between fluid and the moving plate?