Question about polarisation in dielectrics

I was going over my elecro statics course and in a textbook it gave an explanation on how molecules in a dielectric are polarised when placed in an external electric field. 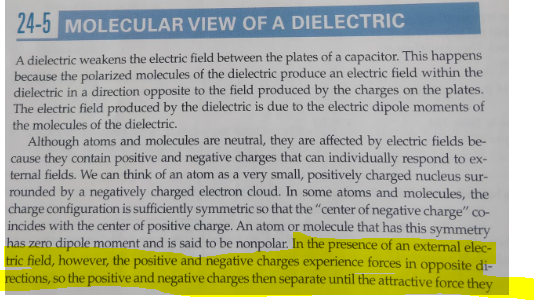 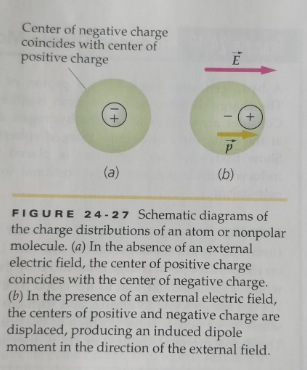 They seem to be saying the electric field increases the separation between the postive and negative charges until its balanced by the attractive force between the charges. What force increases in strength when the seperation increases?

My understanding is the couloumb force is keeping the electron bound to the positively charged nucleus. I agree that in an external field they will recieve opposite forces and try to seperate but if the distance between the electron and the nuceleus increases, the couloumb interaction between them weakens. How can they settle to a new equlibrium?

Where is my misunderstanding?

The electric field inside a uniformly charged sphere increases with $r$. It is a simple exercise in Gauss Law to prove that Electric field inside a uniformly charged solid sphere of charge density $\rho$ is given by $\rho r/3\epsilon_0$. Thus when the positive charge moves with respect to the center of the negative charge, it experiences an increasing force.

I agree that in an external field they will recieve opposite forces and try to seperate but if the distance between the electron and the nuceleus increases, the couloumb interaction between them weakens. How can they settle to a new equlibrium?

They are talking about molecules that are not normally polar (zero dipole moment). The electric field induces some degree of polarization but it is normally very little because the electrostatic force between the positive and negative charge of the molecule is much greater than the force due to the external electric field.

Consequently the electrostatic force between the charges dominates. The separation between charges is small. Take a look at @Rohit Gupta equation which applies as long as $r<R$ where $R$ is the radius of the sphere. The force increases linearly with separation as long as the separation is small. You could say the electrostatic force between the charges behaves like an ideal spring for small displacements. The force increases with separation.

For more info on dielectrics see the following

Not the answer you're looking for? Browse other questions tagged electrostatics electric-fields polarization dipole-moment or ask your own question.

3
Electric Field Between Two Parallel Infinite Plates of Positive Charge and a Gaussian Cylinder
0
Electrostatics of Conductor
0
Why does the charge on the outer surface cancel the external field inside a conductor having a cavity filled with certain charge?
2
Induced motional EMF where the wire is stationary and the field source is moving?
0
Forces on group of electrons in electric field
2
What is difference between electric field and electrical charge?
0
Why does potential energy of a moving charge inside a closed circuit increases?
0
What happens to the orientation of charge or charge density after conductor is removed from an electric field?