Force exerted by rails on a high speed train

I need to find the ratio between horizontal and vertical accelerations exerted on a train by the rails it is running on , given that the train is traveling East at a speed of $v_r=250$ km/h, along the 30 degree North parallel ($\gamma = 30^o = \pi / 6 \hspace{4px} rad$). ($\gamma$ is the angle generated by the Earth's nucleus - equator line and the Earth's nucleus - train line). I need to account for all the fictitious forces that arise from the fact that the Earth is rotating and the train is going at a high speed, but my solution doesn't match my professor's. This is what I've done:

But I don't know go from here to the final solution, which is related to horizontal and vertical accelations. My professor gets:

What am I missing? Thanks!

In this problem the component of the effect vertical to the local level surface is called the Eötvös effect, after the geophysicist Loránd Eötvös.

For completeness let me derive the magnitude of the Eötvos effect for motion along the equator.

Again, this is the simplified case of motion along the Equator.

As we know, the fact that the Earth rotates has the following effect: at the equator the effective gravitational acceleration is the resultant of two components: the true gravity of the Earth, and the fact that a force is required to sustain circumnavigating motion.

The required centripetal force to remain co-moving with the Earth is small, but not negligable.

When the train is moving (in this example along the equator) then its total angular velocity is ($\Omega$ + $\omega_{\ r}$), therefore the total required centripetal force is proportional to $(\Omega + \omega_{\ r})^2R$

Moving the problem to 30 degrees North

Note that both these components are still the Eötvös effect, just decomposed.
The amount weight that the train exerts on the rails will be diminished.
Since the train is moving East the train will tend to swing wide, that is: the rail closest to the Equator will have a bit more weight on it than the rail furthest from the Equator.

I hope it is clear that this problem is unrelated to the case of taking fictitious forces into account. The Eötvös effect is a true physical effect.

[LATER EDIT]
Additional discussion, triggered by the information that the question is from a practice exam.

We assume that here the $\omega$ is used for the angular velocity of the Earth.

I reconstruct that here 'g' is intended as the true gravity, not the measured gravity, as the expression subtracts a term with a factor $\omega^2 R_T$ to arrive at the answer.

(It's very unusual to have 'g' stand for true gravity. By universal convention when the letter 'g' is used it stands for the measured gravitational acceleration. It's not clear why the creator of that practice exam has not followed that convention.)

In the derivation that I gave for the magnitude of the Eötvös effect you see that a term $2\Omega \omega_{\ r}R$ arises. That term is identical to the Coriolis term of course.

[LATER EDIT]
Here is my attempt at reconstructing the thought process of the Practice Exam Creator.

Now, first consider the following 2-dimensional case: a rotating disk, with angular velocity $\Omega$. An object that moves in a straight line in inertial space will move along a curvilinear trajectory with respect to the rotating disk. As we know, the amount of centrifugal acceleration (wrt the disk) will be $\Omega^2r$. You can turn that around and recognize that in order to prevent that centrifugal acceleration a centripetal force proportional to $\Omega^2r$ must be exerted.

In this case the train has a velocity relative to the rotating disk, in tangential direction. If there would be zero friction then the acceleration wrt to the disk is given by the Coriolis term $2\Omega v$ (Where $v$ is the velocity wrt the disk). You can turn that around and figure that in order to prevent that acceleration a force proportional to $2\Omega v$ must be exerted.

The above is for the case of spherical, rotating Earth.
As we know, our Earth is somewhat flattened; the diameter along the equator is about 40 kilometers more than the distance from pole to pole. This means a line from the Equator to a pole is a downhill slope.

So it does matter what 'g' is said to stand for. Whether it is thought of as standing for true gravity, (which cannot be measured directly), or for the effective gravity, which is what is actually measured, is something that must be stated explicitly. 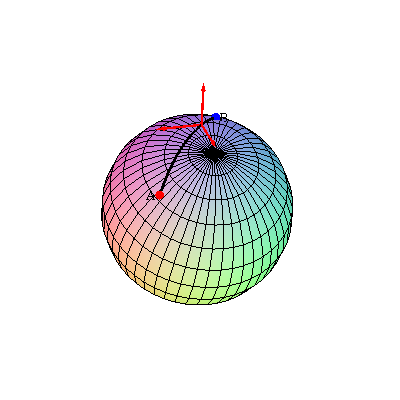 If you seat in the train that travel with the velocity $v$ , you will feel this acceleration:

Position vector discribed the path of the rail on a sphere surface.

$s$ is the path line parameter 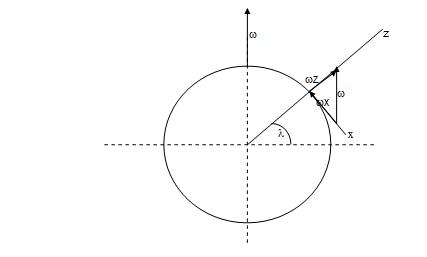 I generally set up these coriolis and centripetal forces on the Earth as shown in the figure.

The train is moving east so the velocity vector is

where v is the velocity of the train.

The position vector $R0$ from the center of the Earth:

where Re is the radius of the Earth.

The angular velocity vector of the Earth's rotation.

where $\omega$ is the angular velocity of the Earth's rotation.

We can now compute all the accelerations.

The total acceleration vector is then:

Not the answer you're looking for? Browse other questions tagged homework-and-exercises newtonian-mechanics reference-frames or ask your own question.

0
Rotating frame of reference
1
Angular velocity of cone rolling on ground
0
Why doesn't fully integrating Gauss' law give the correct linear charge density here?
8
Experimental Result Cannot Be Explained by Theory for 2 Spring 1 Mass System
2
Reasoning behind the solution to this Hamiltonian
0
Deflection of missile due to Coriolis force