Now, please don't dismiss this question because of its entertaining context. Today I attended a lecture by Kip Thorne and at some point he mentioned, almost offhand, that a few years ago it was found that black holes should contain three singularities.

He even said that the hero in Interstellar is saved and returns back because he comes across the "up-flying singularity". Okay, Hollywood had to find a solution, but he sounded as if this is actually a thing.

A standard search comes up with nothing that looks relevant. Do you know anything about this?

black-holes singularities
Share
Improve this question
asked May 23, 2019 at 21:35

Upflying singularity is certainly a nonstandard terminology but the concept this phrase is referring to is an established (and mainstream) science. This interview of Kip Thorne offers some explanation about what type of black hole singularities he was talking about. Also, Kip Thorne wrote a popular science book “The Science of Interstellar” that has chapter 26, “Singularities and Quantum Gravity” largely dedicated to this question.

A more technical (but very accessible to those only learning relativity) discussion could be found in his (with M. Scheel) paper:

Section III is most relevant, and bibliography contains links to further materials, including original papers.

Some context: We are looking at the interior of a large, rotating black hole as experienced by an observer entering the black hole at late time (i.e. long after it was formed). While the region outside of the event horizon for such a black hole would rapidly approach the Kerr metric soon after its formation, the inside region differs markedly from the analytic solution (starting from the near the inner horizon). In particular, the singularities that one expects to find inside a realistic black hole are not the same as singularities of analytic metric.

Singularities in a classical general relativity are described by diverging curvature invariants, which means that tidal forces experienced by an extended bodies become infinite. Event horizon, that serves as the outer boundary of the black hole proper is not a singularity of the curvature. Quantum gravity may modify the singularity itself possibly so that there would be no singularity in the strictest sense (and investigation of such effects is a plot point of the movie) but outside such strong curvature regions the geometry of spacetime would still be described by classical general relativity.

Singularities we are looking for are generic, i.e. their qualitative features would persist over wide range of initial matter distribution leading to the formation and subsequent evolution of a black hole. So, while other types of singularities may exist inside a black hole beyond those three types they would require a special fine-tuning of initial data (such as perfect spherical symmetry) so they are unlikely to appear in a realistic black hole. 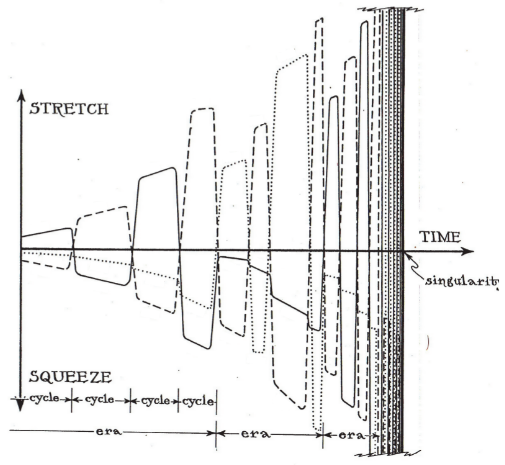 Historically, it was the first type of the generic singularity to be discovered (by a group of soviet physicists).

These last two types of singularity could be considered mild in the sense that while tidal forces for any observer encountering them diverge, the total deformation (stretching and squeezing) remains finite (so in principle an object could survive passing through it only to encounter a more violent singularity of the BKL type later).

The overall structure of black hole spacetime could be illustrated by Penrose diagram: 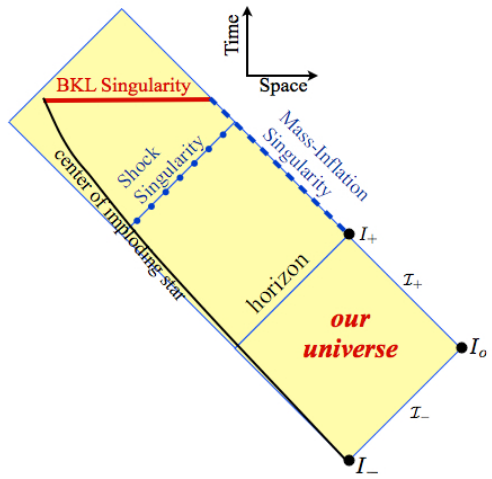 He must be referring to the proposed extra dimensions to the usual (3 space +1 time) universe of General Relativity:

Another subject high on Thorne's list of topics he'd like to discuss in an update of his book is an idea used in the movie "Interstellar": that the universe human beings see is embedded in a larger universe of a higher dimension. The visible universe (called the "brane," short for membrane) has three spatial dimensions and one time dimension; a fourth spatial dimension called the "bulk" may be all around people, but they can't perceive it. In the movie "Interstellar," the "bulk" is called "the fifth dimension."

These are models people are researching . Here is Kip Thorne quoted on the three types of singularities:

Science What goes on inside a black hole

DW: What happens inside a black hole?

Kip Thorne: What we [physicists] know is this: There are three singularities inside a black hole. We didn't know that until recent years.

One of them is very violent, very lethal. It's a singularity in which there's a chaotic oscillation of the stretching and squeezing of space, what we call tidal force (like the forces by which the moon raises the tide on the earth's oceans). And this chaotic stretching and squeezing will take your body as you approach that singularity. And it will stretch your body in one direction, while squeezing it in two other directions briefly. And then it will stretch in one of those other [directions] and squeeze in two directions - briefly.

More recently, it's been discovered that there are two other singularities.

One of them, that I like to call an in-falling singularity, is understandable in this way: If you fall into a black hole in order to experience the singularities, everything that falls in after you over the entire life of the universe is seen by you. It's coming down at you behind you very rapidly ... And because of the compression of time inside a black hole, what falls in after you and over billions of years comes down on you in a fraction of a second - and in a sheet of energy that you don't want to encounter.

Then there is the up-flying singularity. That was discovered just a couple of years ago. And this is caused by all the stuff that fell into the black hole before you did. Some of it, just a tiny fraction, is scattered back at you. And that is probably the most gentle of the singularities. So if you are going to encounter a singularity, that's what you should encounter. And that is the singularity that the character Cooper encounters in the movie "Interstellar."

So it is about "encountering" i.e. observing a singularity, that to an in-falling observer there are three types of interaction with singularities, the interaction characterizing uniquely the singularity.

Not the answer you're looking for? Browse other questions tagged black-holes singularities or ask your own question.