I am learning about Feynman diagrams, and I have trouble interpreting loop diagrams. The picture below shows a loop-induced decay of the neutral pion. $\pi^0 \rightarrow e^+ + e^-$.

I understand that $\pi^0$ has to decay into two photons in order to conserve momentum and angular momentum. I do not understand, however, what the vertical line in this diagram means.

My guess would be that each photon annihilates into a position electron pair, and the vertical line represents a positron and electron annihilating, thus leaving only one electron positron pair as the final products.

However, if that was to be the case, the reaction would be $\pi^0 \rightarrow e^+ + e^- + \gamma$. Can anyone explain the physics represented by this vertical line? 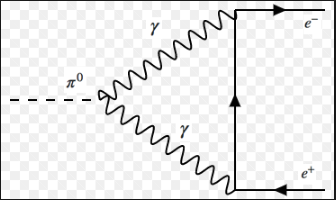 particle-physics feynman-diagrams mesons
Share
Improve this question
asked May 22, 2019 at 11:15

You have to realize that Feynman diagrams are one to one recipes for integrals built up within a quantum field theory. There are rules with one to one correspondence to the integral represented. They are used in order to evaluate crossections and lifetimes and to compare calculations to experiment.

There are internal lines and external lines, whether going along the x axis or the y axis.

External line in your diagram is the pi0 and external lines are the two e+ e- lines on the far right. These are real particles i.e. they have a real four momentum vector and carry the momentum and energy of the interaction.

My guess would be that each photon annihilates into a position electron pair, and the vertical line represents a positron and electron annihilating, thus leaving only one electron positron pair as the final products.

This is virtually true, at each point of the integration, because the four vectors of the virtual lines are under the integration continually variable. The line carry the name "photon" and|"electron" "positron" so as to keep quantum numbers correct between input and output external lines. The internal lines are keeping count of these quantum numbers and thus are identified with the particles, and also the propagators have the mass of the named particle. This is just a useful mathematical tool.

Not the answer you're looking for? Browse other questions tagged particle-physics feynman-diagrams mesons or ask your own question.