Does Sagnac effect imply anisotropy of speed of light in this inertial frame of reference? 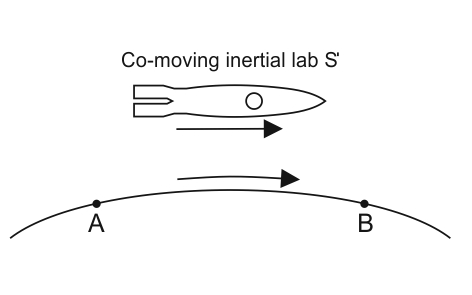 There seems to be a consensus that the one - way speed of light is anisotropic in a rotating frame of reference (Sagnac Effect).

Imagine a rotating ring of arbitrarily large diameter. In accordance with the foregoing the one - way speed of light along the ring clockwise and counterclockwise will be different, because simultaneously emitted in opposite directions beams of light that go along the ring will return to the starting point at different times. Hence, it is reasonable to assume that it is anisotropic on any segment of a ring, large or small, say on a segment AB.

Of course, taking into account the Lorentz contraction, the measured round - trip speed of light on any segment of the ring will be exactly equal to c.

Suppose that, a purely inertial laboratory S’ for a very long time moves tangentially to the circumference on which the ring lies, very near to the AB segment.

There is nothing "magical" about this. For a rotating ring $\omega=v/R$ where $v$ is the tangential velocity of the ring and $R$ is the radius of the ring. Since $v<c$ then $\lim_{R\to\infty}\omega=0$. So then the rotation is 0 and the speed of light is isotropic for any $v$.

This should not be surprising at all. The whole reason that you can approximate a large rotating ring as nearly inertial (to first order) is precisely because as the ring becomes large the angular velocity becomes small. This eliminates both the centrifugal force and the Coriolis force, as well as the Sagnac effect and any other first order non-inertial effects.

EDIT: Furthermore, it is fundamentally incorrect to think of the Sagnac effect as detecting the anisotropic speed of light in the rotating reference frame. For convenience I will use cylindrical coordinates $(r,\theta,z)$.

Basically, although both do occur in a rotating frame they are not the same. About the only thing that they share is that they both depend on a rotation rate.

Short answer: it is anisotropic, but that isn't an inertial frame of reference.

"Frame of reference" in special relativity means "coordinate system". When you talk about a frame of reference you need to be clear about what coordinates you're talking about, including (especially!) the time coordinate.

We keep time on earth by means of a bunch of clocks that are located in various places on the planet, and that we keep synchronized somehow. Let's only worry about clocks at the equator because that's enough for this problem.

Take two adjacent clocks A and B and set them so that the light travel time from A to B and B to A is equal as measured by those clocks. This is called Einstein synchronization and it's how clocks in inertial frames are synchronized. Then adjust C, the clock on the other side of B, so that it's synchronized with B in the same sense. Keep doing this and you'll eventually circumnavigate the globe and get to Z, which is next to A. You'll find that Z and A are not synchronized, and if you try to fix that they'll end up out of sync with Y and/or B. There's a lump under the carpet, and you can push it around but you can't get rid of it.

Let's try a totally different approach: broadcast a light speed signal from the north pole and have each clock set itself to a certain time (say t=0) when it receives that signal. This is essentially how we synchronize most clocks in real life (though the signal often travels over the internet, and the details are much more complicated). It works pretty well. If you look at adjacent pairs of clocks on the equator after this procedure, they'll all be more or less in sync. But none of them will be exactly Einstein synchronized. The lump is still there, it's just evenly distributed around the equator now.

Now, let's take two clocks on the surface, say A and B, and extend them to a line of synchronized clocks extending out into space (tangent to the surface). This is your rocket-ship coordinate system. If you synchronize those clocks pairwise to match the way A and B are synchronized, and A and B were synchronized by the signal from the north pole, then every pair of clocks will be not-quite-Einstein synchronized in the same way as A and B. The speed of light will be anoisotropic as measured by these clocks.

This doesn't contradict special relativity because SR only says that the speed of light is $c$ in inertial reference frames, and this isn't one. Inertial reference frames synchronize their clocks by the Einstein procedure by definition. Your reference frame is a perfectly valid coordinate system, and it might be useful in analyzing the motion of the rocket ship relative to clocks on the ground; it just isn't one of the specific family of coordinate systems that special relativity says the speed of light is $c$ in.

(You might be thinking that it's circular to say that the speed of light is $c$ in inertial reference frames when they're synchronized to make it $c$ in the first place. The interesting thing about them, though, is that they exist at all. In a non-special-relativistic world, either you can't define Einstein synchronization (because the speed of light varies) or the laws of physics don't take the same form with respect to all of those reference frames.)

17
Could speed of light be variable and time be absolute?
2
Why can't we measure the one-way speed of light?
3
Sagnac Effect and clocks synchronization
7
Are Lorentz aether theory and special relativity fully equivalent?