Is this the correct interpretation of specific intensity?

I've always been taught to define specific intensity as the following quantity: if I have a detector here next to me with an area element $dA$ and I detect a power element $dP$ from a source of solid angle element $d\Omega$ in the frequency band $d\nu$ then the specific intensity, by definition, is $I_\nu = dP/(d\nu \cos{\theta}dA d\Omega)$ where the factor $\cos{\theta}$ compensates for the orientation of $dA$ w.r.t the source. Or, using my paint skills: 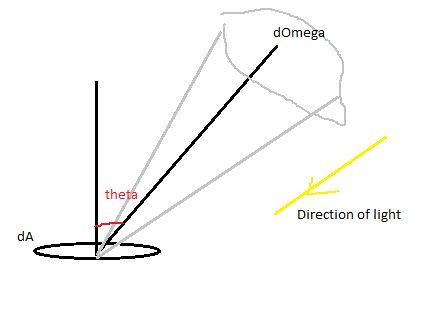 I can't quite wrap my head around why these two are equivalent. Why would they be?

I came up with one explanation of my own: suppose a pencil of light rays pass through an area element $dA$ into a cone of solid angle $d\Omega$ so that the pencil is incident upon a second element $dA'$. Then the solid angle of $dA$ w.r.t. $dA'$ is again $d\Omega' = d\Omega$ (I do not know enough of infitnitisimal geometric elements to know whether this assertion requires more background), such that the light inside the pencil emergent from $dA$ equals the light in the pencil incident upon $dA'$. That is, $I_\nu dA d\Omega = I_\nu dA' d\Omega$. 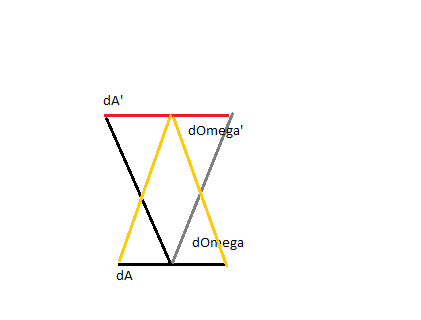 Is this the correct explanation?

Browse other questions tagged radiation intensity or ask your own question.

1
Irradiance on a surface
4
Obtaining photoelectron counts from known radiance
1
What does “intensity of light” mean?
2
Intensity of spectral lines