I recently encountered this problem dealing with inductors, similar to the diagram below. 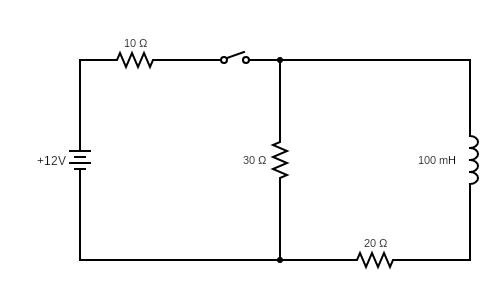 by KVL. I have no problem solving this differential equation for the general case; I'm just having difficulty determining the initial conditions of the current once the switch is flipped open. I'd have to assume that the current through the inductor does not change in magnitude or direction after the switch is flipped open, or else the induced EMF by the inductor would be momentarily infinite. So the current would flow clockwise throughout the right loop. Is this line of reasoning correct? Thanks for the help.

Not the answer you're looking for? Browse other questions tagged electric-circuits or ask your own question.

2
Current division in ideal inductors?
2
Using the loop rule while charging circuits
3
Current in inductor just after switch is closed
0
Help Understanding Inductors in DC Circuits
2
Inductors in parallel. Link between inductance and current in a D.C. circuit
0
Inductors problem
2
Can Kirchhoff's Voltage Law be applied here?
2
Now what will happen in this circuit?
0
Inductors in an AC circuit