In the ATLAS paper for the higgs discovery, they used 2 kinds of different $p_0$-values. One is the expected $p_0$-value, the other one is observed $p_0$-value.

How can one expect a $p_0$-value without real experiment? Seems like the expected p-$p_0$-value is from simulation by assuming the higgs as a given mass. If so, why does the observed $p_0$-value has a large discrepancy with the expected one at 125GeV？ 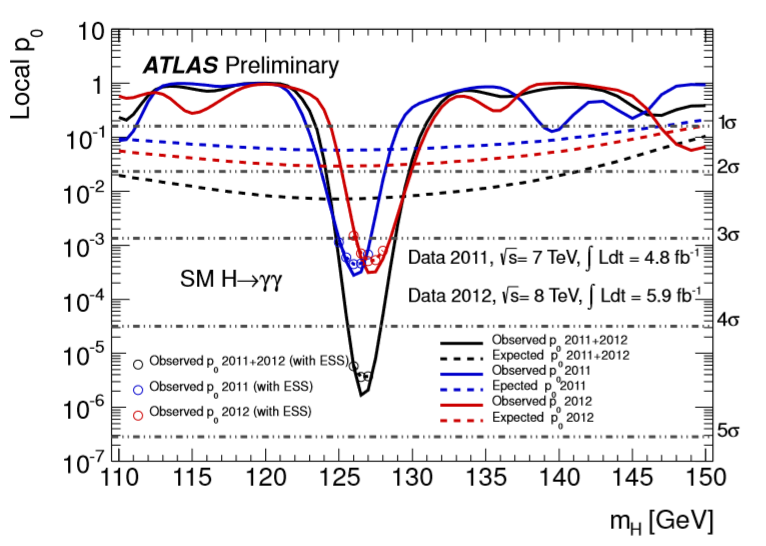 If there is no resonance there how will the data for invariant mass look? 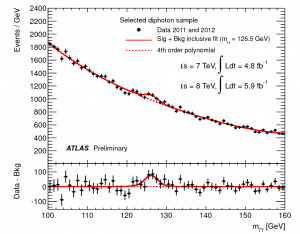 The lower curve is an early type of the plot you are showing, just the difference with the background so that the resonance can be seen. The solid line shows the background, i.e. monte carlo events created with no Higgs in the model, which is the basic use of Monte Carlo when checking with data. One can extract the statistical probability of the curve being above the background, how many standard deviations away from it the data are, and this is connected mathematically with the probability of having this resonance.

In the image you show it is the probabilities themselves that are extracted for each year of data, the dashed lines are when the monte carlo events are used without a resonance, and the solid lines are clearly declared as data, summed for consecutive years of data taking.

I guess that the monte carlo background has a gradual enhancement at the resonance after the first year, because of the "look elsewhere" effect, to eliminate the statistical bias of checking at exactly this invariant mass for a resonance.

Not the answer you're looking for? Browse other questions tagged energy particle-physics experimental-physics standard-model higgs or ask your own question.