To meet a U.S. Postal Service requirement, employees’ footwear must have a coefficient of static friction of 0.5 or more on a specified tile surface. A typical athletic shoe has a coefficient of static friction of 0.800. In an emergency, what is the minimum time interval in which a person starting from rest can move 3.00 m on the tile surface if she is wearing (a) footwear meeting the Postal Service minimum and (b) a typical athletic shoe?

I know how to do this, but I do not quite understand the theoretical aspects involved in it.

Why is the static force acting on the friction force during walking? How, at every step, does it act by allowing movement?

Why is the static force acting on the friction force during walking? How, at every step, does it act by allowing movement?

When we walk or run we apply a pushing force against the ground. The ground applies an equal and opposite reaction force on us. See the free body diagram of a runner below. It applies as well to a walker.

The difference between the person shown running and a person walking is the angle $θ$ is greater for the walker. When the person is standing still ($θ=90^0$) and the only forces are the persons weight and the equal and opposite normal force on the ground. There is no pushing force for friction to oppose, and so therefore no friction. 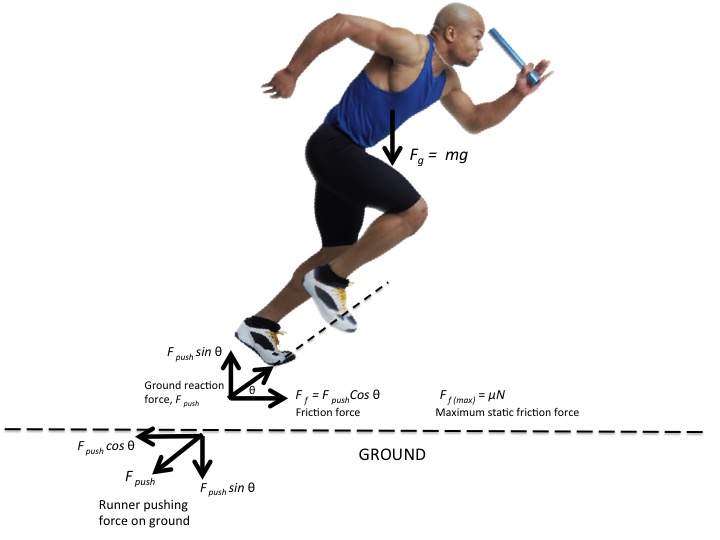 We walk by pushing the ground backwards. At each step, we tend to push the ground backwards by our feet. There is tendency of our feet slipping backwards. In that case, friction comes into play. If enough to prevent slipping, static friction acts in forward direction on our feet, enabling us to move forward. Just imagine if there was no friction. We would never been able to 'walk'(maybe hopping like kangaroos would help!). You might have observed walking over a slippery surface gives difficulty (friction is not completely zero). A fast runner( or an athlete) has more chances of slipping, hence requires more static friction. If static friction is not enough, friction would change to kinetic thereby, causing slipping, (and even rubbing of soles! )

Now, coming to your problem. It will further clarify things:

When we talk about minimum time interval, we mean walking fast as possible, so highest tendency of slipping. So we have to consider the limiting value of static friction in the problem. So, we know the acceleration of person($a=\frac F m =\frac {\mu mg}{m}=\mu g$). We can calculate the time interval.

Hope this answer helps you!

For a person to accelerate in the forward horizontal direction there must a force on the person in that direction - Newton's second law.

The force on the person in the horizontal forward direction is provided by the frictional force due to the ground $F$.

Assuming that there is no slipping between the shoe and the ground, the maximum magnitude of this frictional force is $F=\mu_{\rm static} W$ where $W$ is the weight of the person.

0
Why is horizontal component of reaction force while walking regarded as friction?
1
When is work done by static friction force positive and when is it negative?
-1
Precise use of "Newton's third law"