Why is there no current between two capacitors connected in series?

I want to ask a question about the figure below. 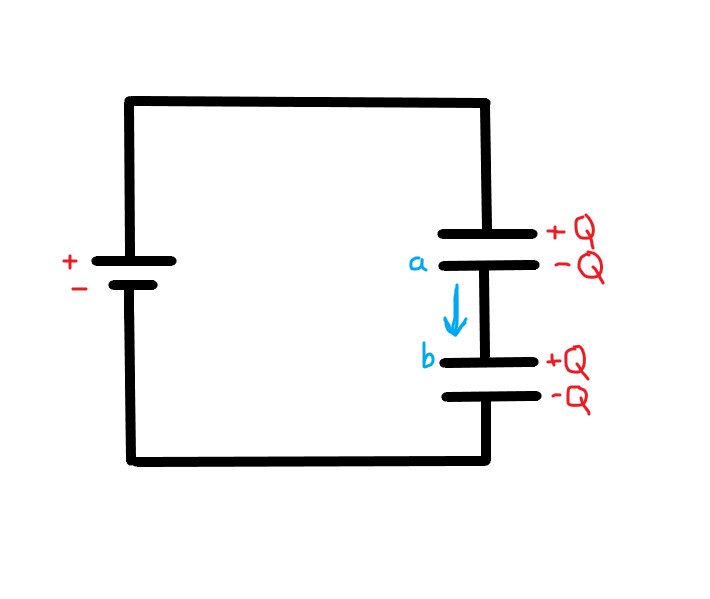 Why the current does not flow from $-Q$ term to $+Q$ term or from a to b since there is a voltage?

Short answer: Potential is defined depending on the choice of a origin (e.g. ground). The positive plate of a capacitor has potential $Q/C$ greater than negative plate of the same capacitor. We do not know its potential compared to anything else, unless we know how they are connected in a circuit. Here the points a and b are connected by an ideal conducting wire, hence the potential difference between them must be zero, so is the current.

Detailed answer: If you connect two uncharged capacitors in series to a battery, there will be a current in the circuit until equilibrium is reached. As current flows, the capacitors will start charging, and there will be a voltage drop along each capacitor.

In equilibrium, the net voltage drop in the two capacitors will be equal to the voltage in the battery. 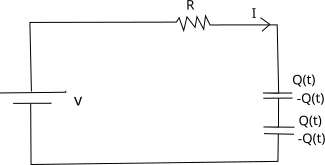 Consider this analogous situation, where there are batteries instead of capacitors. Will there be a current flow, now that a and b have different polarities? There won't be, as the net voltage between a and b is zero. 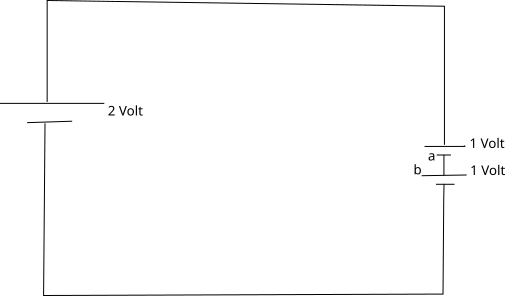 The charges will remain as they are even after disconnecting the battery(provided you don't connect the other two terminals together). You can imagine the other two plates(say C and D) as producing a uniform E-field and the plates A and B as the opposite faces of a metal block(as they are connected together). The charges are induced on the faces but no current flows as these charges are attracted towards the plates C and D due to Coulomb force of attraction.

capacitor fully charged and then disconnected

(This animation is from Wikipedia)

And as we know, $$E=-\frac{\text dV}{\text dr}=0$$ So the potential difference among the faces $A$ and $B$ inside the block will be zero as the potential is constant.

I assume that the question is about the DC case. There is no current between a and b, as there is no voltage difference. The voltage difference between the plates opposite to a and b, say a' and b', is canceled out by the charges on a and b. The plates a and b are connected so form, a single conductor. The charges on a and b are an example of how a conductor cancels out any voltage across it by building up surface charge.

Not the answer you're looking for? Browse other questions tagged electrostatics electric-circuits capacitance voltage batteries or ask your own question.

3
Potential Difference Between Capacitors in Series
0
Current flow with batteries in series vs parallel
0
AC current and capacitors
0
Can a series of capacitors convey alternative current?
1
Current Through Inductor in Series RL circuit
3
Apparent paradox of current through two parallel plate capacitors in series in an open circuit
1
When two capacitors are connected in parallel, do they drain battery quicker?